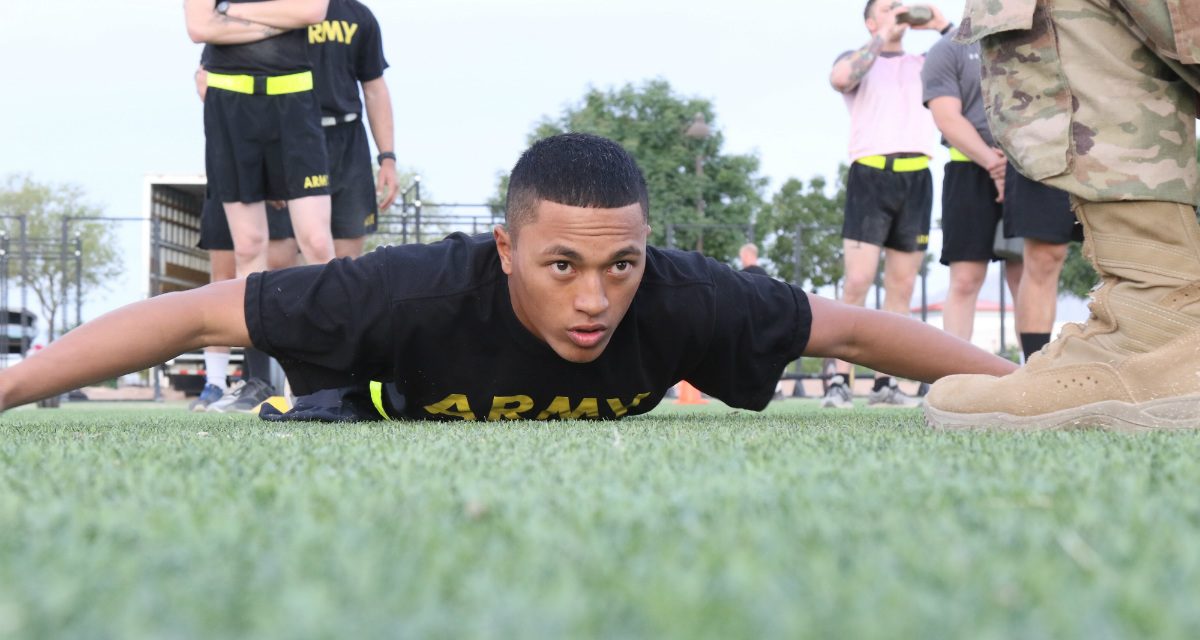 Editor’s Note: This article was originally published on May 17, 2018.

After years of study, experimentation, and pilot testing across the force, the Army appears to have settled on a new physical fitness test—the Army Combat Readiness Test, or ACRT. This new six-event test will keep the two-mile run from the current Army Physical Fitness Test (APFT), but scraps the push-ups and sit-ups in favor of leg tucks, a medicine ball power throw, three-rep max dead lift, “T” push-ups, and a shuttle sprint-drag-carry. The ACRT follows a trend among the military branches, as the Marines, Navy, and Air Force have all adopted new tests and grading standards in recent years to better assess physical requirements expected of their service members.

Still, “everybody’s doing it” isn’t a sufficient reason to abandon the APFT—a physical fitness test that has been in use for almost forty years. So why is the Army doing it? The general argument against the APFT is that it focuses only on muscular and aerobic endurance and its events bear little resemblance to combat-focused physical tasks. The ACRT aims to fix all that by testing endurance, strength, explosive power, speed, and agility through events that mimic warfighting tasks like carrying ammunition, moving a casualty, and lifting a soldier over an obstacle. But, the new test comes with a few challenges that need to be addressed.

The ACRT, for example, is comparatively much more time intensive than the APFT. Each set of equipment allows approximately five soldiers to complete the full six-event ACRT in seventy-five minutes. In an infantry battalion with ten sets of equipment and eight hundred soldiers, completing the ACRT will take sixteen days—three work weeks—if limited to normal morning PT hours. Since the current APFT throughput is only limited by the number of available graders, an entire battalion can easily complete the APFT in a single PT session. While there are ways a battalion could adjust to make executing the ACRT more efficient, the financial cost is more significant.

Beyond consuming more time, the ACRT transition is going to be expensive. A battalion’s set of equipment, or ten ACRT sets, is estimated at $12,000. With hundreds of battalions across the Army—combined with geographically dispersed units like the more than 1,100 ROTC campus locations, 1,600 recruiting stations, or US Army personnel stationed in embassies worldwide that need their own sets—startup costs for the ACRT could easily reach into the tens of millions of dollars, if not higher. That’s a big budget pill to swallow after almost four decades of a nearly cost-free physical fitness assessment. That also doesn’t address associated costs of equipment replacement over time, or potentially reconfiguring on-base fitness facilities to allow soldiers to train for these news tasks.

While the ACRT has been sold as a means to reduce soldier injuries, the new test introduces physical tasks that require proper training and monitoring, such as the dead lift and medicine ball power throw. According to the Army Public Health Center, musculoskeletal injuries account for 70 percent of all medically non-deployable personnel, and weight-bearing and exercise-related activities account for roughly 50 percent of all non-combat injuries. Many of those injuries result from overtraining and improper exercise. A perfect example is the ubiquitous sit-up—the APFT’s core strength test—which has long been known to cause lower back pain and injuries. That’s why the Marine Corps has phased them out. New exercises require trained leaders demonstrating proper form and enforcing standards.

But, the general response has been positive in pilot testing across the force, as most soldiers see the ACRT as a better total fitness assessment. As such, transitioning to the ACRT brings new opportunities—but also new requirements to correct some of the more systemic fitness program failings that have plagued the Army for years.

The Army must train the trainers.

Army PT is generally a platoon-level function. That means the Army relies primarily on junior NCOs, platoon sergeants, and lieutenants to develop and sustain a fit force. The problem is that few, if any, of these leaders are actually certified to manage a fitness program. They may be trained in how to run physical training and perform exercises, but that is fundamentally different from developing a fitness program that ensures soldiers are prepared for the type of complex drills found in the ACRT.

This is an easy fix. The Army has a Master Fitness Trainer (MFT) Course already, and that course can be adapted before the ACRT takes effect. With only a two-week resident school portion, MFT should be integrated into training for new NCOs (Basic Leader Course) and new officers (Basic Officer Leader Course), and then built upon in later NCO and officer schools. The best way to build readiness while preventing injuries is to invest time in training the trainers.

To reduce the costs and replicate combat conditions, use combat equipment.

Several ACRT tasks tie directly to physical requirements in combat—this is arguably its biggest advantage over the APFT. The shuttle sprint-drag-carry in particular includes a weighted sled pull that resembles evacuating a casualty, and the kettle bell carry simulates moving with ammunition cans. To save money and even better replicate combat conditions, the Army could replace ACRT-specific equipment with items readily available in the force.

Rather than purchasing kettle bells to simulate carrying ammunition, why not carry ammunition cans? Rather than selling all of the huge number of ammunition cans the Army goes through to the public (a very common practice), it would be easy to fill them with a set amount of weight and use them for the test. Also, rather than investing in a new type of sled to pull around a couple 45-pound plates, why not use the standard-issue SKEDCO litter system? Standardizing the weight is simple, and using the SKEDCO would reinforce an actual tactical task.

The Army has started doing this already, particularly for enlisted service members. Aside from earning promotion points that increase with a soldier’s overall APFT score, the Army’s Select-Train-Educate-Promote policy has already integrated the APFT into all professional development schools. Passing the APFT is a requirement to remain in the course, and APFT failure results in immediate dismissal and a negative formal evaluation. Promotion to the next higher grade requires completing the associated school, and the APFT is now a part of that.

But in many cases, Army height and weight standards often have little connection to performance. Human builds vary widely, and it isn’t uncommon for a soldier to max an APFT but have to be “taped” because he or she is too heavy according to the Army’s height/weight chart. But if performance is what matters (and it should be), the Army should adopt something similar to the Marine Corps’ policy for testing body composition. For Marines who achieve a score of 285-300 on the Marine Physical Fitness Test, the height-weight test is waived, and those that score 250-284 are granted an additional 1-percent body fat allocation. Though the scoring for the ACRT has not yet been determined, the Army should consider something similar for soldiers who achieve a maximum score. Such a policy incentivizes fitness and a commitment to high individual performance.

Make the ACRT part of a culture shift to health and fitness.

Army leaders have already identified the need to address more than just a physical fitness test. The ACRT is one change among many that address a much-needed cultural shift towards health, wellness, and fitness. One concept being explored would create Soldier Performance Readiness Centers—one-stop shops for all things fitness. These centers would be designed to address the nutrition, rest, mental, spiritual, and physical components of fitness. Part of the design is to educate and integrate an increasingly fitness-challenged incoming population of recruits, while also providing resources for career service members.

Complementary to that is the need to address military dining facility challenges. Over the past several years, military dining facilities have seen dramatic patron decreases, even among single soldiers who can eat for free. Reasons run the gamut from poor selection to long lines to location inconvenience to challenges with facility hours and work schedules. Some dining facilities are getting creative to draw soldiers back. They’re providing grab-and-go options during hours outside meal times, introducing healthier meals and rotating menus, and even looking at food-truck capabilities to compete with less healthy and more costly retail services. This is the type of creative approach the Army must institutionalize to really create a culture of health and fitness.

The ACRT demonstrates an institutional willingness to buck tradition in order to find more effective ways to build and sustain a healthy and capable force. This new test has been years in the making, has been piloted repeatedly at numerous installations, and has evolved to ensure the events provide a more comprehensive fitness assessment. While there are still challenges to be addressed, the ACRT provides an opportunity to correct some of the ills that have plagued physical readiness training for nearly four decades. This test is a move in the right direction.