Grow, Borrow, Recruit, and Reorganize: How the Military Can Get the Personnel It Needs for Digital War 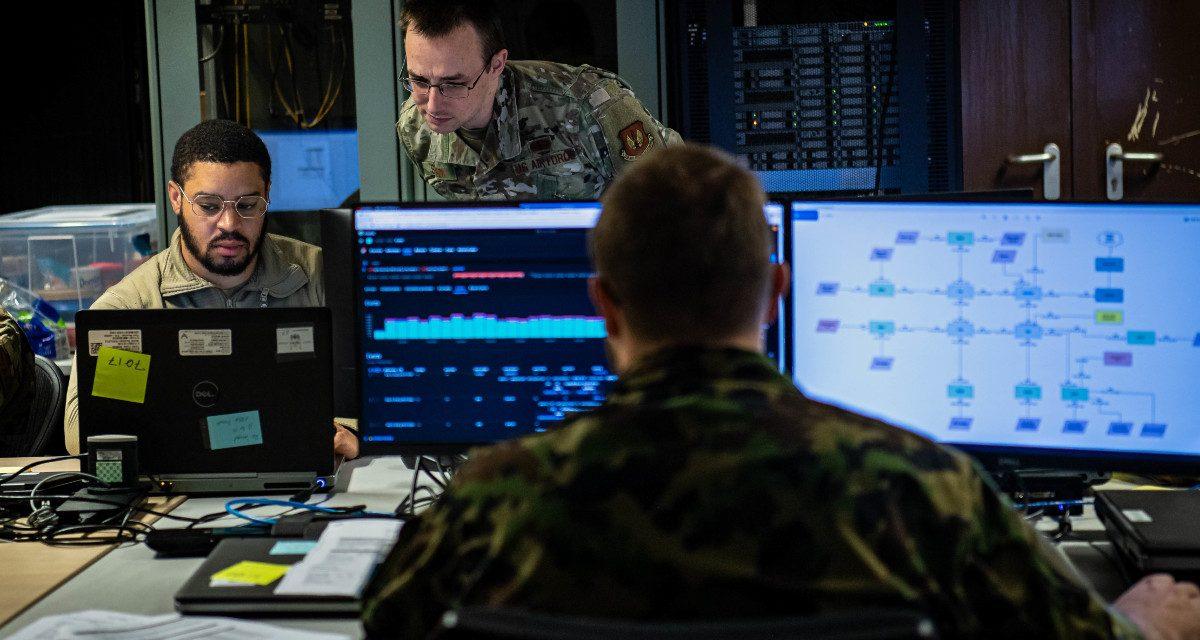 Editor’s note: This article is part of the series “Compete and Win: Envisioning a Competitive Strategy for the Twenty-First Century.” The series endeavors to present expert commentary on diverse issues surrounding US competitive strategy and irregular warfare with peer and near-peer competitors in the physical, cyber, and information spaces. The series is part of the Competition in Cyberspace Project (C2P), a joint initiative by the Army Cyber Institute and the Modern War Institute. Read all articles in the series here.

“Americans have not yet grappled with just how profoundly the artificial intelligence (AI) revolution will impact our economy, national security, and welfare.”

That’s how former Google chairman Eric Schmidt and former Deputy Secretary of Defense Bob Work, the chair and vice chair of the National Security Commission on Artificial Intelligence (NSCAI), opened their letter introducing the commission’s final report, released last year. Despite regular news stories about how various government entities are endeavoring to include AI and other technologies into their existing operations, the military is in a similar place to the rest of American society. Recently, two scholars working with the military on AI, Brandon Leshchinskiy and Andrew Bowne, said total cultural change was necessary for the military to embrace future warfare. They specifically argued that the military could not continue to apply incremental fixes to a problem that required greater creativity. At the heart of the new and creative solutions this challenge requires is managing talent.

Both the Department of Defense and the individual services have taken steps to address the problem. For example, the US Army Cyber Center of Excellence focuses on the development of doctrine. The military created the Joint Artificial Intelligence Center to assist senior leaders with the operational preparedness relating to the impacts of AI. Additionally, West Point’s applied statistics and data science major allows students to gain an education aligned with the requirements identified by the NSCAI, as do the scholarships for the National Digital Reserve Corps (NDRC), under the Reserve Officer Training Corps (ROTC). A pilot program for cyber officers in ROTC was announced in May 2022. Ultimately, the ideal in the future is a United States Digital Service Academy (USDSA) to address critical gaps for the military over the long term. The creation of the NDRC and USDSA—both NSCAI recommendations—allows service in the government to be part-time. But none of these ideas address the very real short- and medium-term needs of the military to confront increasingly digital warfare. To do so, the Department of Defense should take action in four key areas: growing, borrowing, and recruiting talent, and reorganizing to produce the workforce needed to meet the demands of digital war.

Akin to what other industrialized democracies are doing, the federal government needs to grow digital talent through a long-term approach with school-aged children. There is precedent for such federal action. After the Great Depression, poverty and malnutrition were widespread. Following European models, state and federal governments provided basic food assistance to help young children learn and grow. The school lunch program was designed to address poverty but had a secondary effect of creating a healthy population of conscripts for World War II capable of handling the rigors of combat with stronger bones, greater muscle mass, and a healthier immune system. Local and state models can feed into successful nationwide programs. Growing digital fluency and skills related to AI and automation at a very young age requires investment now, in creative ways analogous to those of almost a century ago.

American school systems are starting to introduce digital literacy programs―planting seeds before children move on to learning about AI and machine learning. Because of COVID-19, many schools were forced to adopt new principles involving expanded use of technologies, even if they were unprepared initially. That change may prove advantageous in the years to come, as future cohorts of military recruits will already be socialized to the kind of workplace automation that the Pentagon has had to implement of late.

Other models to grow talent include high school magnet programs and application-based secondary education programs. After four years, high school students graduate with a high school diploma and an associate’s degree in technical career fields like engineering, graphic design, computer science, biomedicine, and cybersecurity. Magnet programs are an inexpensive way to foster nationwide pathways for students to benefit from careers in STEM with head starts into leadership and management of digital literacy that benefits national security. It goes beyond an early childhood education and creates a career path in early adulthood. The military could—quickly and with relatively few resources—tap into such programs to seek out potential digital talent who might not be thinking about a military career.

In the short term, the government can borrow digital talent from industry. This would bring into government service people working on the front lines in the ever-changing field of AI, including biotech, robotic engineering, algorithm coding, gaming design and development, technology acquisition, and cybersecurity management. Some of this is currently done with short-term contracted workers that are not federal employees and compete directly with the military for talent.

There is precedent in this area, as well. The US Civil Air Patrol, chartered in 1941, relies on volunteers to train cadets and others on aviation basics, aviation safety, search and rescue, and emergency services. Civil Air Patrol mobilizes civilian aviation resources to assist in national security when needed through federal incentives at the state and local level. Currently, there are fifty-six thousand members in fifteen hundred units, commonly found in US Air Force–style uniforms providing a range of local disaster assistance, including by aiding local law enforcement and emergency response personnel with everything from lost hikers to downed aircraft.

In 2016, the Marine Corps established a Cyber Auxiliary made up of civilian volunteers. In simulated environments, auxiliary members fulfill training, education, advising, and mentoring roles alongside Marines. Auxiliary members are not permanent members of staff. These organizations are called in a time of need and possess qualifications and expertise based on civilian experience. This helps their skills stay sharp and relevant.

Recruiting paid talent willing to learn, take on responsibility and commit to the military in a digital service role is the most desirable pathway for achieving a more digitally capable military. Talent competition is fierce. The military also has many barriers for entry—such as security clearance eligibility, citizenship, physical fitness and health standards, background checks, or contract timelines—making the pool of candidates limited. NSCAI commissioner Mignon Clyburn summed up the problem this way: (1) academia offers autonomy; (2) industry pays more; (3) hierarchy in government is not as attractive for tech talent; and (4) government agencies struggle to recruit talent.

The future AI-literate military may not look like the one produced by traditional military recruitment. Examples of populations the military might consider in the age of AI-assisted warfare include cyber sleuths, white-hat hackers, or open-source analysts like those from Bellingcat. Other populations might range widely, from meme makers to social media influencers to tech support teleworkers. Passionate experts who contribute digital talent with refined and semiprofessionally produced videos, reports, and demonstrations in high school or university classrooms, garages, and basements often create enticing professional media content. Social media entrepreneurs contributing to content distribution and analysis can benefit the military regardless of age, location, and physical capability.

Further, nontraditional skills and ways of thinking within digital spaces are often self-taught. The military will have to recruit personnel capable of passing relevant skills tests regardless of professional degree or credentials. For example, recruiting from hackathons and national conventions that reward successful penetration testing could be a source of talent. Recruiting highly talented individuals like “hacktivists” may also require considering those who have operated in the gray zones of cyberspace. Admittedly, recruiting such individuals might mean rethinking security clearances and the military’s expected deference to age and rank, but not recruiting such talent may prove the most significant problem over time.

Finally, once talent is grown, borrowed, and recruited, the US government must produce a force capable of being employed. Future graduates from new, digital-focused programs like the NDRC and the USDSA require a mission to address the problems forecasted in DoD’s future operating environment. Currently, for example, even with a degree from the data science major at West Point mentioned above, available commissioning branches remain a limitation. If a newly commissioned officer goes into the fields of infantry, armor, or military police instead of cyber, intelligence, electronic warfare, or signal, the talent in which the military has invested and so desperately needs could be easily wasted.

In the Army, specifically, some existing career fields—in cyber, signal, and intelligence, for example—are relevant to the fields of digital talent. But more are necessary. New jobs for digital talent should include data scientist; database procurement and fielding specialist; statistician; computer scientist; computational specialist; software developer; algorithm coder; electronic modeling specialist; supply chain security specialist; financial security specialist; human-machine observer controller/trainer; battle-systems integrator technician; and data/knowledge management technician. These jobs would span the enlisted, officer, and warrant officer ranks. Similar to the structure created by the Army Medical Department, a digital regiment, corps, or department would facilitate professional adherence to certification, licensure, and professional development. These do not yet exist. These changes would likely require other military career paths to decrease, disappear, or change to make room for new personnel without growing end strength, but these are the bold decisions leaders must make to be prepared for future challenges.

Integration of AI in the military will increase the ability to perceive, decide, and act beyond human cognition alone. The future of information warfare will require more AI as the fog of war increases and information overloads human decision-making. An emphasis on human-machine teaming for decision-making could lower risk and reduce conflict. Soldiers, sailors, airmen, and Marines must be creative problem solvers, forward-thinking about what machines can and cannot or should not do. These skills become increasingly important as AI automates previously analog processes. Service members who can harness machine-generated data from various sensors can integrate that information quickly to solve particular problems. If a service member can understand, modify, and react on the fly with data-enabled action from available sensors, this integration into problem solving becomes a force multiplier.

But service members’ working effectively with AI and other new technologies requires rethinking what qualities are essential for success in the military. The NSCAI final report stated that lack of talent in government was the biggest impediment to the United States being prepared for AI this decade; and Deputy Secretary of Defense Kathleen Hicks recently said that the US military needs to adapt to how war is changing. It must begin to address this reality immediately. Growing, borrowing, and recruiting talent, and pairing that with necessary organizational changes, will help DoD produce a more capable future force. With a proper production model, the military will be AI-ready to meet, or surpass, the NSCAI commission recommendations.

Major Megan O’Keefe is an information operations officer in the US Army and a 2022 graduate of the School of Advanced Military Studies at Fort Leavenworth, Kansas.

The views expressed are those of the author and do not reflect the official position of the United States Military Academy, School of Advanced Military Studies, Department of the Army, or Department of Defense.