How China Was “Lost”: Tracing a Problematic Discussion from the 1940s to the Present 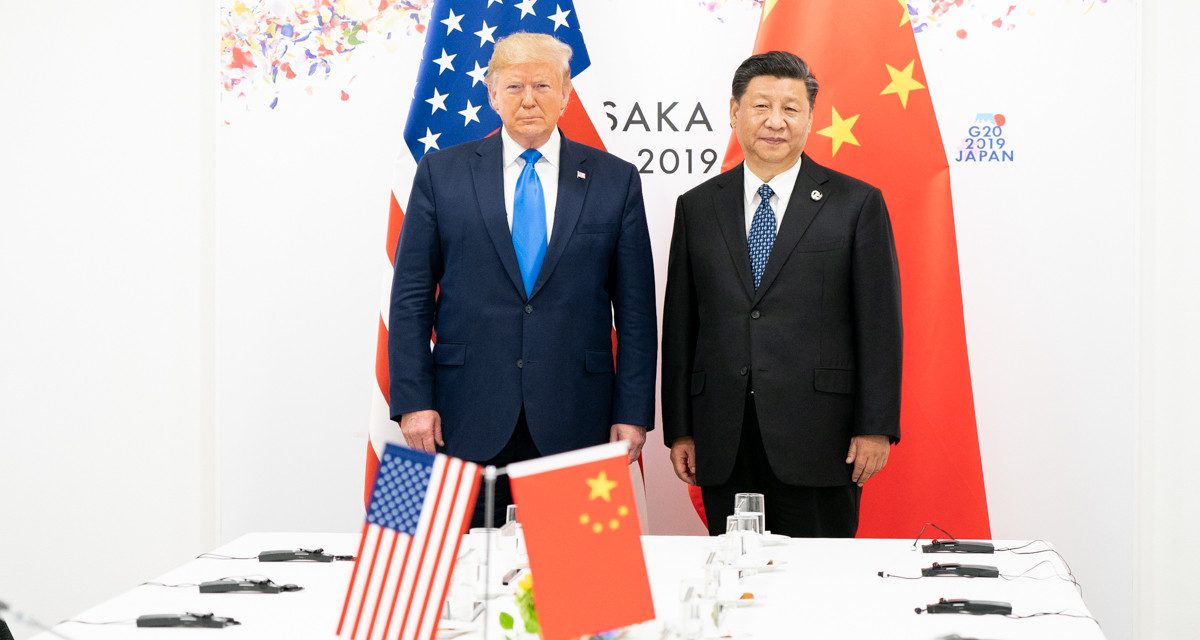 Mao Zedong proclaimed the establishment of the People’s Republic of China on October 1, 1949. Coming just a month after the Soviet Union had tested an atomic bomb—roughly four years before the Central Intelligence Agency had forecast that Moscow would have the ability to produce one—that outcome seemed to reinforce that the supposed hegemony Washington had inherited with the conclusion of World War II was dubious, if not illusory. It also had a personal resonance for George Marshall, one of the most esteemed soldier-statesmen of his generation. As Foreign Affairs executive editor Daniel Kurtz-Phelan explains in his book The China Mission: George Marshall’s Unfinished War, 1945–1947, while Marshall is chiefly remembered for the visionary plan for European reconstruction that bears his imprimatur, his beliefs about the reach of US influence were significantly forged in the crucible of a bitter disappointment: Marshall had served as America’s special envoy to China from December 1945 to January 1947, laboring, ultimately in vain, to mediate a peace between Mao’s Communist forces and Chiang Kai-shek’s Nationalist forces.

There was a prosaic explanation for Marshall’s failed intervention and the eventual defeat of the Kuomintang: namely, that despite its preponderant material power, the United States faced acute limits to the outcomes it could achieve as well as the setbacks it could avert (an assessment that obtains even more today). Kurtz-Phelan notes, though, that many US observers were incensed, asking how China had been “lost.” Initially arguing that “China was America’s to save, and it was Marshall’s failure to have lost it,” the diplomat’s critics would later contend that a “more enlightened policy toward the Communists . . . could have won them over as anti-Soviet allies.” Kurtz-Phelan characterizes these conclusions as “fanciful, both of them reassuring in their affirmation of American omnipotence.”

That notion—“American omnipotence”—was the theme of a seminal December 1952 article by Scottish historian Denis Brogan. Brogan was a well-wisher of the United States, stating that he “would gladly settle for an American hegemony” and concluding that “American policy since 1945 has, on the whole, been wise, far-seeing, magnanimous.” He, too, though, expressed bewilderment at the assessment that Mao’s victory constituted a failure of US foreign policy:

The Chinese Revolution, an event of immense importance, is often discussed as if it were simply a problem in American foreign and domestic policy and politics. The Communist triumph in China is discussed as if it were simply the result of American action or inaction, the result of the mistakes, and worse than mistakes, of General Marshall, Secretary Acheson, President Roosevelt, and the Institute of Pacific Relations; and as if the Communists or the Russians would not have “captured” China had American policy been represented and controlled by Representative Judd—or even, perhaps, by Senators Cain and Jenner.

Today, as China grows more authoritarian at home and assertive abroad, US observers are once more debating how Beijing was lost. A common narrative holds that the United States facilitated the resurgence of what is now its foremost strategic competitor, naïvely hoping that China would move in the direction of political liberalization and accept the configuration of the postwar order. High-ranking officials in the Trump administration have been making this argument forcefully in recent weeks. In late June, National Security Advisor Robert O’Brien called US engagement of China “the greatest failure of American foreign policy since the 1930s.” Three weeks later, Attorney General William Barr stated that “America made China’s meteoric rise possible.” Most recently, Secretary of State Mike Pompeo concluded that the United States “has not brought the kind of change inside of China that President Nixon had hoped to induce. . . . President Nixon once said he feared he had created a ‘Frankenstein’ by opening the world to the [Chinese Communist Party], and here we are.”

It is appropriate to interrogate the thinking that influenced America’s approach to China for much of the past four decades, especially given the present pace and scope of the relationship’s deterioration. Perhaps China’s resurgence may not have been as swift had the United States not assisted with the reforms that Beijing initiated in the late 1970s, granted it most-favored-nation trading status, or advocated for its entry into the World Trade Organization. Perhaps its trajectory would have been slowed even further had the United States elected to contain it, especially after the Soviet Union’s collapse had eliminated the Cold War–era rationale for closer US-China ties.

In considering such counterfactuals, though, it is important to bear in mind at least three points. First, the current trajectory of US-China relations does not necessarily furnish a post hoc invalidation of the US opening. According to one of America’s most esteemed observers of China, the Asia Society’s Orville Schell, “the alternative in 1972 was an ongoing Cold War, perhaps even a hot war. Engagement was a chance worth taking and there were many inflection points during its twisted progress when things might have worked out very differently.” A different set of twists would not, of course, have fully eliminated tensions between the two countries, some of which are inbuilt; China regards democratic rule as an existential threat to its survival, it views the postwar order as a largely Western imposition, and, like the United States, it regards itself as exceptional in the annals of human history. The narrowing gap in comprehensive national power would have strained relations as well, as would policy disagreements that arose as a more capable and confident China contested US national interests more directly. Still, it was not inevitable that strained cohabitation would yield the escalatory spiral that we are now witnessing. Even near the end of the Obama administration, with strategic distrust intensifying, Washington and Beijing recorded impressive cooperative achievements, among them a landmark climate change agreement in November 2014 and a deal to promote greater cyber trust in September 2015. In recent years, though, the dispositions and decisions of Presidents Donald Trump and Xi Jinping have greatly intensified bilateral tensions, as has the exogenous shock of the coronavirus pandemic.

Second, alternative courses would have entailed risks of their own. Suppose the United States had adopted a more agnostic approach, not attempting to stymie China’s development but not enabling it either. Suppose, moreover, that the two countries had, more generally, made little effort to cultivate a working relationship. It is less likely that they would have developed the kinds of guardrails—deep trade and technological interdependence, a wide array of official and informal dialogues between government officials, and robust educational and cultural exchanges, for example—that had, until recently, prevented strategic distrust from overwhelming bilateral ties. Had the United States elected to pursue containment, meanwhile, China may have emerged as a wholesale revisionist, not a selective one, and attempted more aggressively to undercut a wider range of US foreign policy objectives. The greater one’s disappointment with the outcomes of a given course of action, the greater is the temptation to assume that a different one would have yielded better results; unlike policies that have actually been implemented, though, hypothesized alternatives have the privilege of moving from conception to fruition without having to contend with the contingencies that invariably complicate execution.

Third, to suggest that China has ascended due to US folly or that China could not have progressed without US assistance is to at once overstate Washington’s agency and discount Beijing’s. To adapt Brogan’s conclusion, China’s resurgence, a phenomenon of immense importance, is often discussed as if it were simply the result of American action or inaction, the result of the mistakes, and worse than mistakes, of eight administrations from Richard Nixon’s to Barack Obama’s; and as if China would not have contested the postwar settlement had American policy been represented and controlled by more discerning practitioners. In brief, it strains credulity to believe that the United States could have indefinitely prevented the world’s most populous country from developing into a formidable, multifaceted competitor.

That conclusion does not, of course, diminish the prudence of recalibrating US policy toward China. The United States should increase foreign military assistance to Southeast Asian countries so that they can more confidently resist China’s attempts to press illegal maritime claims in the South China Sea. It should gradually reconfigure its supply chains so that it relies less on China for vital commodities such as personal protective equipment and inputs into highly sensitive military technologies. And it should spotlight, reject, and condemn any extraterritorial efforts by China to stifle the freedom of expression of US citizens, companies, and campuses.

Going forward, though, appreciating the limits to what it can accomplish through unilateral pressure will be increasingly essential to America’s development of a durable China strategy. Beijing’s economic heft and technological inroads are growing. Longstanding allies have made clear that they do not wish to be instrumentalized in support of US pressure against China. And China has demonstrated in recent months that it is willing to incur enormous reputational costs, especially in the pursuit of its regional interests.

This last point actually offers some reassurance, though, because it demonstrates the limits of China’s strategic vision. Up until the pandemic, the Trump administration’s economic pressure against China had yielded few dividends. Its share of global exports was slightly higher at the end of 2019 then it was when the first tranche of the administration’s tariffs went into effect, in mid-2018. Huawei also recorded record sales in 2019. Allies largely rejected the administration’s protectionism, and even those that sympathized with its national security–based concerns about the telecommunications giant bristled at US demands to reject Huawei from building out their 5G networks. Rhodium Group’s Noah Barkin explains why Washington’s campaign against the company had largely floundered in Europe until recently: “As a substitute of a query of, ‘Is it in our nationwide pursuits to exclude Huawei?’ it grew to become, ‘Are we going to comply with the orders of the Trump administration?’ And lots of people didn’t wish to do this.”

Given how poorly the United States has responded to the pandemic at home and abroad, China had an unusually propitious opportunity to enhance its diplomatic profile, advance its geoeconomic initiatives, and bolster its global influence. It has, instead, responded to America’s strategic errors by committing many of its own—passing “national security” legislation that undercuts Hong Kong’s semiautonomous status, intensifying military and economic pressure on Taiwan, escalating its standoff with India along the disputed Line of Actual Control, pressing its maritime claims in the South China Sea, and threatening economic punishments for and issuing crude insults against countries that criticize its response to the pandemic. In the process, it has done considerably more to undercut its own resurgence in the past three months than unilateral US pressure has been able to over the past three years; whether one considers the growing momentum against Huawei, the increasing activity of “the quad,” or the sterner attitude of Brussels towards Beijing, China is contributing to its own encirclement. The United States consequently has a renewed opportunity to influence the external environment in which China emerges, especially if it coordinates more closely with its European and Asian allies. It should focus more on than task than on relitigating once more how it lost China.