Ike vs. Ridgway: Lessons for Today from the Philosophical Battle Between Two of America’s Greatest Military Leaders 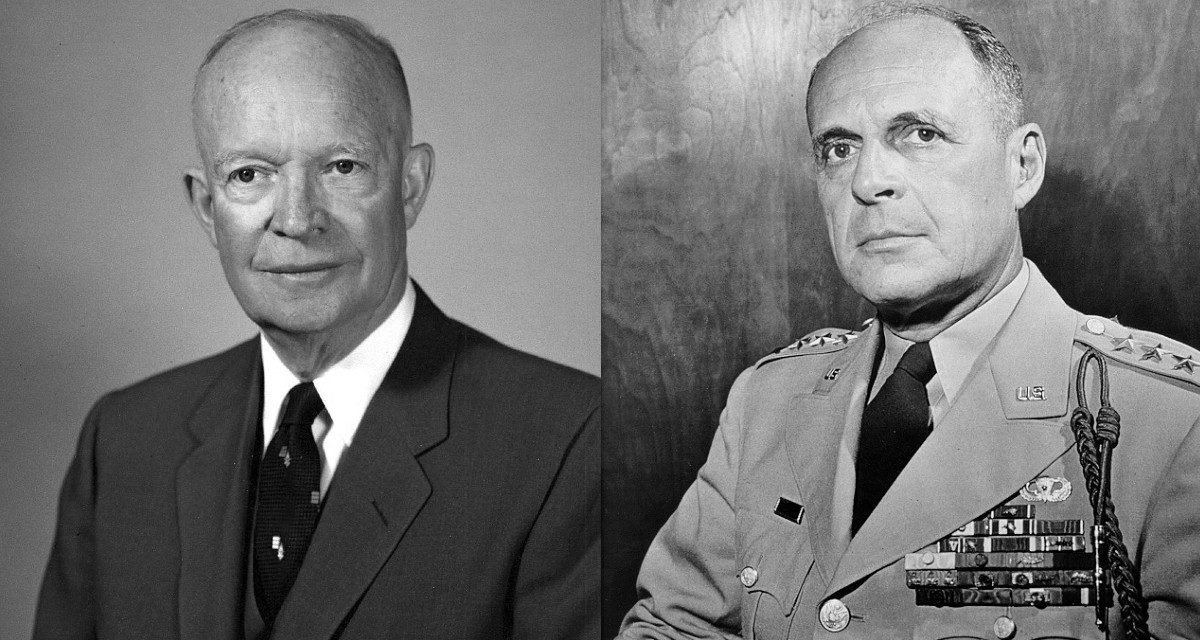 The combination of professionalism and technology may also result in narrow-minded specialization more suited to a debating society than to an organization whose task it is to cope with, and indeed live in, the dangerous and uncertain environment of war.

The impending national COVID-19 recovery effort, combined with an enormous and rising national debt, portends a years-long period of declining defense budgets. This will force a re-evaluation of priorities, to be sure, but it will also accelerate trends that have already begun to take shape. The Department of Defense is committed to the development and application of critical technology, for instance, and that is unlikely to change. In the age of high-technology war and multi-domain operations, the military is likely to forsake traditional force structure and conventional capability for modernization and new technology. The Marine Corps is already taking the lead on this approach, shedding tanks and infantry formations to prioritize new technology in a multi-domain fight. In the years ahead, defense officials will be tempted to reduce manned systems and conventional force structure. These changes will manifest as soon as the forthcoming budget proposal.

The Pentagon, promising a “dramatic shift” toward new capabilities, is likely to cut traditional land warfighting functions and formations in favor of research and development investments  in space, artificial intelligence, and cloud computing in 2021 and beyond. In making significant cuts to budgets in the months ahead, defense officials would be wise to review another period in which emerging technology—in the form of nuclear weapons and airpower—held the allure of allowing the nation to win while reducing investment in the conventional force.

The Dawn of Nuclear War

The 1950s competition between two nuclear-armed states, the United States and the Soviet Union, ushered in the risk that war was a potentially global apocalyptic event. Conflict no longer threatened mere armies and cities; swaths of humanity itself would disappear into the raised dust of atomic blasts. War threatened to kill hundreds of millions within days and perhaps a billion within months and years. Radiation would render vast landscapes forever ravaged. Entire species of animals wiped out by radioactive fallout. War was no longer a means of gaining and holding power; it became an unthinkable specter haunting humanity’s very existence.

The Cold War also ushered in an argument about the nature and purpose of landpower in an atomic age, an argument in which two sides hugged opposing philosophies tightly. One side, represented by US President—and former World War II Supreme Allied Commander in Europe—Dwight Eisenhower, believed that seizing and holding terrain had been rendered irrelevant by technology capable of quickly and entirely destroying that terrain. The other side of the disagreement was represented by another fabled World War II commander, Matthew Ridgway, formerly of the 82nd Airborne Division who was by 1953 the chief of staff of the Army. Ridgway believed that the unimaginable stakes of nuclear war meant that conflict would revert to its natural expression: between groups of ground soldiers fighting for an advantage on land.

There were more foundational disagreements between the two men. For Eisenhower, defeating the Soviets would require a moral and economic informational campaign demonstrating to the world the benefits of capitalism. Economic might, combined with a society committed to the principles of self-determination, was the critical weapon system that would allow the United States to outlast its communist rival. Balanced budgets and smaller federal expenditures were more important than overwhelming landpower. Ridgway, meanwhile, believed not only in the enduring utility of ground combat but also in the centrality of the foot soldier in a US-Soviet military confrontation.

The difference between these two colliding outlooks struck at the heart of the nature of war itself. Ridgway and Eisenhower, two American titans of war, staked out irreconcilable positions. The resultant debate has profound lessons for the Army today.

Dispute About the Nature of War

For Eisenhower, the nature of armed conflict itself had changed: war was no longer a political endeavor, but was now an absolute effort, one with the potential to render politics itself pointless. He felt that by holding onto the antiquated notion of a large ground force, Ridgway was stubbornly trying to put limits on war when they no longer belonged. This, Eisenhower felt, was dangerous and could lead the Soviets to think that the United States was not serious about nuclear retaliation. Furthermore, defeating the Soviets, according to the president, required a robust domestic economy and balanced federal budgets, which mandated a smaller military. It also required the threat of nuclear weapons delivered by air. In effect, new technology, nuclear weapons, and aircraft allowed the country to reduce the size and cost of the Army, which would be relegated to restoring order in American cities in the aftermath of a Soviet nuclear attack, a mission that did not require a large combat force.

Ridgway, on the other hand, felt his commander-in-chief failed to understand that because nuclear war was unacceptable for any rational actor for resolving most crises, the next fight would involve non-nuclear ground combat. According to Ridgway, by drastically reducing Army budgets in the mid-1950s, the nation gave up any military options short of suicide or surrender.

Ridgway argued for an Army resourced with tactical nuclear weapons, capable of fighting in small units in jungles and larger units in rolling European plains and cities. The general saw future conflict as a ground battle integrating airpower, low-yield nuclear weapons, and artillery. Ridgway felt his Army was dangerously underprepared for this looming struggle. Eisenhower and Charles Wilson, the secretary of defense, publicly ignored their Army chief and privately questioned his intellect. In 1955, Eisenhower effectively fired Ridgway, refusing to reappoint him for a second two-year term as Army chief.

While Eisenhower’s strategy arguably played a role in winning the Cold War, history proves Ridgway’s astute prognostication. Historically, great-power competition often manifests in conflict through proxy wars; by divesting a portion of America’s landpower capabilities, the White House rendered the nation unprepared for a growing number of limited conflicts. More importantly, a gutted and largely demoralized Army would reveal itself incapable of defeating the Viet Cong insurgency in the years after Eisenhower left office.

The parallels to today’s global security situation are clear: a small group of states has a technological advantage over much of the rest of the world, rendering a global war of great powers a nightmarish proposition in which entire cyber, space, domestic, and international military infrastructures are at risk. To prepare for multi-domain conflict with a high-tech adversary, US leaders must maintain sufficient traditional capability to either compel an enemy to avoid a land fight or crush enemies who desire to engage in one. In so doing, the Army must set the conditions to acquire capabilities necessary to gain an advantage at the outset of conflict and maintain conventional capabilities to fight in a degraded environment afterward.

In the event of a major theater war, there will be no time to shift the force from competition to conflict. The potential transition from a high-tech competition to a traditional shooting conflict will occur without warning. Our enemies will not give the United States the time needed to develop and hone traditional warfare skills if we are not ready to go.

The Consequence of Error

The Army must pursue new technology without growing overly infatuated with space, missiles, cyber, and artificial intelligence. High-tech wars, after all, may not be short; they are very likely to be grinding wars of attrition that devolve into troops engaged in ground warfare and clashes in large urban areas.

As the nation lurches into a period of great fiscal uncertainty, Congress and the Department of Defense must heed the lessons of the Eisenhower and Ridgway struggles. The days of $718 billion defense budgets are over, at least for the coming years, and perhaps well beyond. Tough choices lie ahead; leaders will be tempted to cede conventional infantry, armor, and artillery for hypersonics, autonomous systems, and space-based defenses.  However, the consequence of error in threading the forthcoming defense budget needle is catastrophic. The Army must be ready to win on the ground the next time it is required to do so.

Col. Joe Buccino is a soldier and resident student at the US Army War College. Previously he has served as a Pentagon spokesman and spokesman for the 82nd Airborne Division.