The Inescapable Truths of Urban Warfare: Five Lessons from Basra 2007 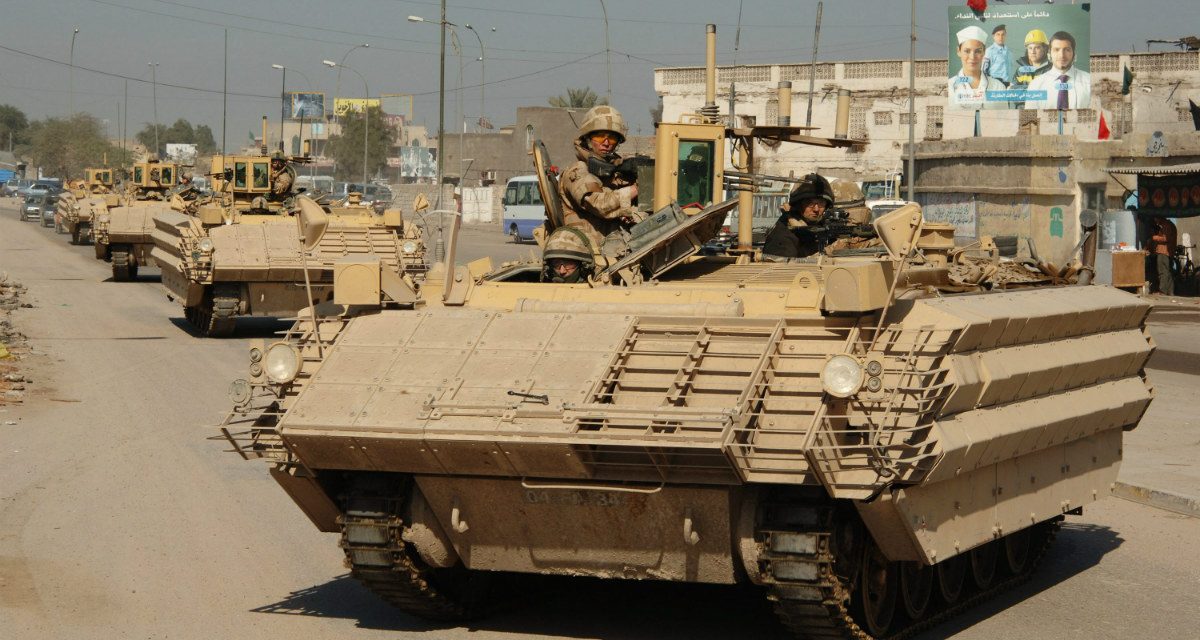 In 2007, UK and coalition forces in the southeastern Iraqi city of Basra faced a series of tactical challenges. Those challenges—like the ones US forces would confront that year and the next further north in Baghdad’s Sadr City neighborhood—offer insight into some universal and enduring characteristics of urban military operations. In fact, the situations in Basra and Baghdad shared a number of characteristics, not least of which was that both the UK forces in the south and the Americans in the capital, along with their Iraqi partner forces, were battling Shia militias that, at various times, dramatically ratcheted up their levels of violent activity.

In Basra, many lessons were learned—or relearned—the hard way, and they are at risk of being forgotten. The fighting in that city highlights five interrelated tactical considerations that should inform the way practitioners think about and plan for the contemporary urban fight:

These considerations are not new or unique, but because none of this is going away, Basra offers a useful lens through which to explore them. To warfare futurists looking for low-risk, low-cost, silver-bullet answers to the conundrums of urban warfare, Basra’s lessons are inconvenient but necessary truths.

First, you can’t fight urban physics. British forces learned very quickly that an urban environment like Basra directly effects operations from conception to execution. It might seem an obvious point, But Western militaries should not underestimate how much our intuitive appreciation of the enemy, ground, time, space, risk, and frictions is shaped by formative training-ground experiences, usually of an uncluttered, unconstrained, and essentially linear rural battlespace.

Basra in 2007—a city of over two million people crammed into approximately twenty square miles, with temperatures reaching as high as fifty degrees Celsius (122 degrees Fahrenheit)—provided an operating environment in stark contrast to the pre-mission training environment: the temperate prairie of Canada or the chill of our major maneuver training area on Salisbury Plain.

The devil was in the detail. As the enemy demonstrated, even in the most complex and dense of urban areas there was no truly impassable terrain. Instead of a simple, monolithic “urban area,” Basra presented an array of micro-environments. Wide modern boulevards led to winding ancient streets, themselves leading to narrow alleyways between compounds. Basra, the “Venice of the East,” offered other challenges to maneuver, as well. A complex system of waterways blocked and channeled. The western urban-rural interface, with the few main access routes into the city, was an operational environment in itself. Getting into, and out of, the urban area proper became a battle all its own.

The city also provided a rude reminder of the challenges of achieving overmatch against a threat in a three-dimensional and 360-degree environment. Locating the enemy was never a given, and the concepts like identifiable “forward lines of own troops” and secure rear areas were, at best, problematic. Holding vital ground and key terrain is just as critical in urban as rural environments. But you can’t do everything everywhere.

The physics of the city necessitated a particular capability mix of mobility, protection, and firepower, and shaped and compromised maneuver, all of which limited opportunities. Basra the place quickly ate up scarce resources and limited physical and conceptual freedom of maneuver, and that was before the force faced Basra the people.

When overlaying an operations template onto a complex urban tapestry like Basra’s, it gets real complex, real quick. Urban operations demand detailed synchronization to maintain sufficiently balanced force elements to gave commanders options against dynamic and stubborn threats. The requirement to carefully control and phase activity was compounded by the reliance on critical supporting assets, notably intelligence, surveillance, and reconnaissance platforms, combat engineers, and joint fires. Counterintuitively, maneuver operations were frequently built around supporting and enabling capabilities and not the other way around. And of course, no operations were in isolation. The activities of other actors, not least the Iraqi Security Forces in their various guises, and unilateral action by various nations further added to the complexity.

The physical, conceptual, and emotional intensity and complexity of fighting in urban areas places opportunities for friction and the fog of war front and center to operational planning. The challenges of command, control, coordination, and battlespace management—often ranging way beyond the traditional scope of a brigade span of command—came into sharp relief. Identifying friend from foe, the strict control of fires and maneuver, and maintaining overall situational awareness required dedicated resources and demanded constant and consistent discipline, effort, and honesty.

A feature that characterized our efforts in Basra in 2007—and that is unique to urban fights—was the continuum of operations that ran concurrently and or sequentially in and around the whole city. Any operational period could see platoon-level security patrolling, brigade-level reactive operations, and Iraqi special operations forces—supported by national-level assets and an armored infantry company in a combined-arms warfighting role—striking high-value militia targets. The counter-indirect fire battle in and out of the city involved the coordination of ISR (intelligence, surveillance, and reconnaissance) and joint fires assets and took place concurrently with everything from executing convoy and aviation resupply operations in to Basra Palace to the enduring key-point defense of the Provincial Joint Coordination Centre—a joint headquarters shared with Iraqi Security Forces. Operating parameters and norms were stressed and enabling activities, including command and control, were required to function at maximum capacity.

We also had to contend with another difficulty in Basra: you don’t own the city, and just as the city impacts operations, operations also impact the city and its people. The issues associated with “war amongst people” are amplified when operating in any population centre, and Basra, Iraq’s second city, was no different. The complex human terrain is to operating policy and permissions what the complex physical terrain is to maneuver. Our legal and policy advisors and our interagency colleagues became central to our operations. Our Intelligence and targeting analysts, charged with positive identification and collateral damage assessments, became our key capabilities. We learned early on to beware of the veneer of control. It is easy to conflate the temporary physical securing of key terrain with dominating the will of a living and breathing city. Force ratios, as illustrated, are the enduring long pole in the urban operations tent. It takes more than one company to dominate the densely populated and closely packed al-Hayyaniyah area on the edge of the city that was the center of militia support.

There is an equal risk of being seduced by the veneer of understanding. Understanding a living, breathing city is a topic warranting further study in itself but we must guard against reinventing the wheel; there are many lessons to be learned from recent operations. I would contrast our intuitive understanding of Basra and its human terrain with that of Belfast, Northern Ireland during British military operations there. The degree of understanding we achieved in Basra paled in comparison to the city-wide, systematic, multi-agency, and multi-layered counterterrorist intelligence and surveillance operation in Belfast—and that was before recent advances in sensor and analysis technology.

And then there was the enemy. The nature of the city added ambiguity over even the seemingly straightforward questions of who we were fighting and why. Much of the violence could appear incidental, or accidental, to our operations. The simple fact that must be recognized is that regardless of your operation, life in the city, nefarious or otherwise, will continue and will serve as the context within which decisions are made and operations are planned and executed.

Much of our forces’ brigade-level activity focused on sustainment because inevitably, urban operations hurt, and resilience—physical, moral and conceptual—becomes king. Not planning for or around sustainment meant planning to fail. Combat service support operations demanded the same, or more, detailed planning and resourcing as any other activity. The resource requirements, complexity, and vulnerability of resupply operations such as the ground convoy resupply of Basra Palace through the contested parts of the city were underestimated at our peril and we learned some hard lessons.

As the intensity of operations in the city increased, units experienced a sometimes eye-wateringly rapid degradation of combat effectiveness. Urban fighting amplifies attrition rates on people and equipment through enemy action, environmental wear and tear, and non-battle injuries. Generating a meaningful, formation-level reserve, properly resourced and synchronized into the plan, was essential and became a consistent, often unwelcome, planning factor.

But it is not just about physical sustainment. Set against the demands and realities of contested urban operations, sustaining fighting spirit in a prolonged, often ambiguous, and always bloody fight demands genuine leadership.

Sustaining an effective plan–refine–execute–assess operational cycle that overmatches the enemy in the urban fight places significant demands on commanders and staff alike. Resilient leadership teams able to sustain a consistent quality of decision, ideas, and staff output in the harsh demands of urban operations are paramount to success. When optimizing a force for a sustained urban fight a line from our brigade commander’s intent in 2007 still rings true: “Balance is the lifeblood of operations.” The force must be resilient—mentally and physically—avoid becoming over extended, and hold the breadth and depth of resources optimized for the operation.

Finally, the 2007 Basra experience signposts a future that is perhaps already here: it was very much an all-in fight. Far from constraining the use of novel force elements, we found that the urban environment offered opportunities for joint, multinational, host-nation, and interagency cooperation, often limited only by imagination and the ability to adapt. The traditional boundaries of strategic, operational, and tactical blurred, as did some of the procedural, cultural, and institutional blockers to effective integration. The examples are many—ranging from the employment of maritime intelligence, surveillance, and reconnaissance and the exploitation of Basra’s waterways by riverine assets to the blending of special operations and conventional capabilities, lateral joint planning with fixed-wing air and rotary-wing aviation assets, and working intimately with governmental and international-community stakeholders. You can never do enough at the tactical level to “plug in” to the pulse of the wider city through local civic governance and other agencies. Operations in urban areas provide many necessary opportunities for wider civilian-military outreach, which must be both planned for and resourced. Harnessing additional, often novel, capabilities does come with a bill, however and can add, in contact, additional complexity to an often already finely balanced plan.

The experiences of British and coalition forces in Basra in 2007 demonstrated that urban operations, by their very nature, are as they are, and not as we would like them to be. Their characteristics and common themes, or variations of them, are validated in conurbations and conflicts as diverse as peace support operations in Banja Luka, counterterrorist operations in Belfast, and counterinsurgency in Kandahar. When planning for urban operations in the future, it must be remembered that the intensity and complexity of the operating environment amplifies generic operating characteristics and heightens the demands on the force—physical, moral, and conceptual. Urban operations can be discretionary, but they will always be unforgiving for those conducting them.

Lt Col Ben Baker is a British Army officer who has deployed worldwide on operations in urban environments, from Belfast to Kandahar. A War Studies graduate from Kings College London he is a contributor to the Warwick University War in the Global City Project and is the Urban Operations lead for the UK’s 7th Infantry Brigade—the famous Desert Rats.