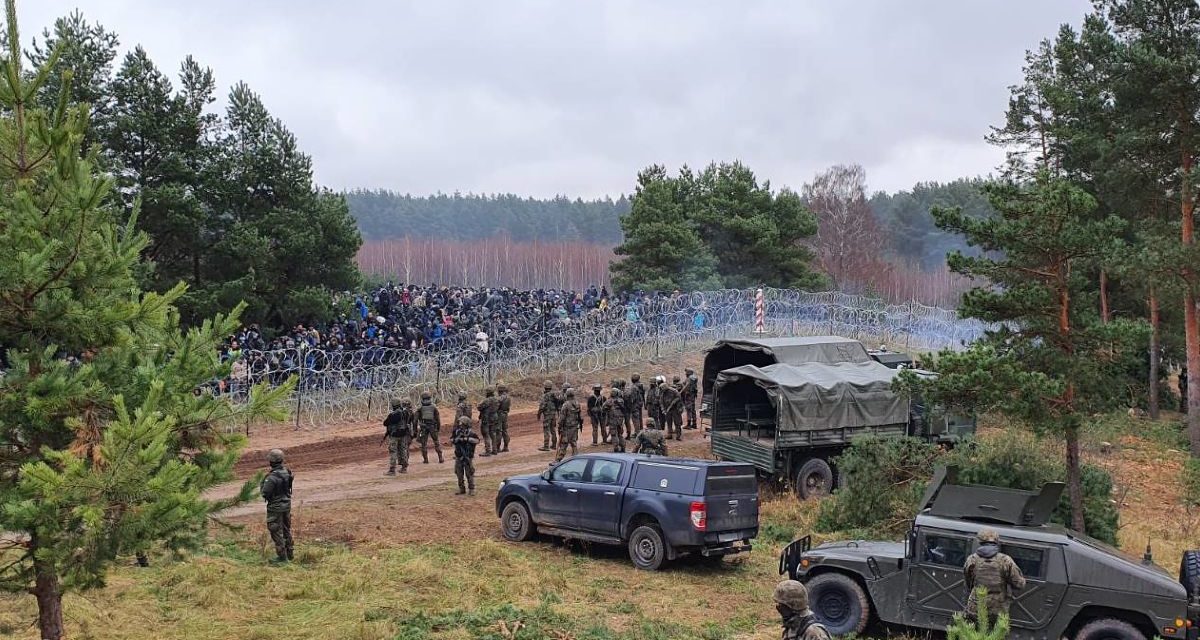 In 2015, at the height of the European migrant crisis taking place mainly across the Mediterranean Sea and southern, western, and central Europe, some five thousand Syrian, Afghan, and Iraqi refugees crossed the Arctic Circle border between Russia and Norway on bicycles before seeking asylum with the Norwegian authorities. The migrants benefitted from an obscure loophole in the laws governing passage from both sides across the Russo-Norwegian border, which prohibit pedestrians and vehicle passengers without passports from crossing but have no regulations regarding cyclists. David Kilcullen describes this event in his 2020 book, The Dragons and the Snakes: How the Rest Learned to Fight the West, as he explores the Russian government’s role in bringing thousands of Middle Eastern migrants to one of Europe’s northernmost borders in what he calls an act of “liminal warfare.”

The ongoing and escalating border standoff between Belarus and the European Union is thus not the first time that migration has been used as a coercive tool against the EU or NATO. The latest increase in tensions continues a pattern of escalation that began following the fraudulent 2020 Belarusian presidential election and subsequent crackdown on anti-regime demonstrators. Under the administration of disputed president Alexander Lukashenko—whose rule is contested by pro-democracy activists and not recognized as legitimate by the EU—Belarus has engaged the EU in tit-for-tat escalation responding to EU sanctions, including after Belarus forced a flight operated by commercial airline Ryanair to land in Belarusian territory in order to arrest a dissident onboard. Lukashenko’s overarching goal is to consolidate his control over Belarus and dissuade challenge to his rule. To do so, he is leaning heavily on his close partner and fellow autocrat Vladimir Putin to jointly pressure the EU into establishing some form of relations with him as the leader of Belarus, providing Lukashenko with de facto legitimacy and solidifying his grip on power.

Belarus initiated the migrant crisis on the Polish, Lithuanian, and Latvian borders over the summer shortly following the Ryanair incident, and is stoking one of the EU’s greatest fears in the process. The backlash to the 2015 migrant crisis put a number of EU members under intense pressure, contributing to a surge in support for far-right Eurosceptic parties in countries including Germany, France, Sweden, the Netherlands, Hungary, Poland, and Italy, while decisively contributing to Britain’s vote to leave the bloc in 2016. Europe responded by striking deals with Middle Eastern and North African states such as Turkey to keep migrants from reaching EU territory, drawing oft-forgotten criticism that the bloc was abdicating its humanitarian responsibilities toward asylum seekers and migrants. Belarus is betting that while the EU and its constituent states can tolerate the dirty business of migrant pushbacks when they happen in the Middle East or North Africa, they’ll concede in the face of a critical narrative when it is happening on the EU’s external border itself. Lukashenko hopes to extract concessions from the EU and bolster his legitimacy in exchange for stopping the migrant flow, while the EU is focused on simultaneously preventing a migrant influx that could once again inflame tensions within the bloc and supporting the Belarusian pro-democracy movement.

Trouble Within the Union

The current crisis is unfolding against a backdrop of increased tension between eastern and western EU member states, largely over issues related to judicial independence, executive aggrandizement, LGBT rights, and abortion rights. While differences on these issues are very real, the EU is first and foremost a “peace project,” created to prevent a return to the destructive conflict that rocked the continent for centuries. Most of the migrants don’t even want to remain in the EU’s eastern states, and are attempting to reach wealthier western European states, namely Germany. Poland, Lithuania, and Estonia thus find themselves bearing the ugly burden of guarding the EU’s borders from a neighboring autocrat, to the benefit of their EU partners with whom peripheral tensions have grown in recent years.

Recognizing this as a hybrid threat, similar to the liminal warfare concept that Kilcullen describes in his book, the EU has publicly supported Polish efforts to secure the border with Belarus thus far. The main question now is whether the EU will continue to support Poland in the face of Belarusian escalation, especially as migrants continue to be trapped in the freezing cold woods along the frontier. Poland has already come under criticism for their decision to exclude lawyers, aid workers, and even the Catholic Church from entering the area near the border, understanding that the well-intentioned presence of civil society may act as a magnet for migrants and advance Lukashenko’s narrative that blames the EU for the crisis.

EU concessions to Belarus will not only provide Lukashenko the legitimacy he seeks but will raise serious questions in eastern European states about their security in the face of both hybrid and conventional threats from Russia and its allies. A 2019 study by the International Institute for Strategic Studies found that without the United States’ military capabilities, NATO’s European members would be unable to prevent a Russian occupation of the Baltic states and eastern Poland—all also EU members—in a conventional conflict. At a time when the United States seeks stable relations with Russia in eastern Europe so it can concentrate on its contested position in the Indo-Pacific, eastern Europe will increasingly have to rely on western European states such as France, Britain, and Germany for support against external aggression. Eastern Europe already has cause for concern in Germany’s and France’s often conciliatory attitudes toward Russia, along with fresh frustrations as the controversial Nord Stream 2 pipeline moves closer to operation.

Western European states, by virtue of geography and historical experience, do not live with the legacy of Russian occupation like those in eastern Europe do. If the EU fails to stand with Poland, Lithuania, and Estonia against Belarus during the current crisis, when migrants are walking across the border, however, it will prompt concern that the EU—and by probable extension, NATO—won’t stand with them if tanks are rolling across the border. As the United States continues its pivot to Asia, a necessary task given the challenge of strategic competition with China, Poland, Lithuania, Estonia, and the other eastern European members of NATO and the EU will be looking toward western Europe, especially France and Germany, and judging their willingness to guarantee European security.

The migration crisis on the Belarusian border, as a classic hybrid threat, is a test of solidarity both for the EU and for NATO—both institutions with solidarity at their very cores—and of member states’ willingness to resist authoritarian pressure. If the EU resolves the crisis without providing Lukashenko the legitimacy he seeks, despite the existing tensions within the bloc, it will demonstrate that the EU member states will not shirk their obligations to one another when confronted with external aggression. If Lukashenko succeeds in forcing the EU to give in, however, eastern European members, with a history of being divided, annexed, or abandoned by their neighbors and allies, will find themselves questioning the reliability of their contemporary western European partners, a repetitive theme throughout the long and contentious history of conflict over eastern Europe.

George Pavlakis is a US Army officer. He holds a bachelor’s degree in international affairs from the US Military Academy and is currently earning a master’s degree in politics and technology at the Technical University of Munich in Germany.