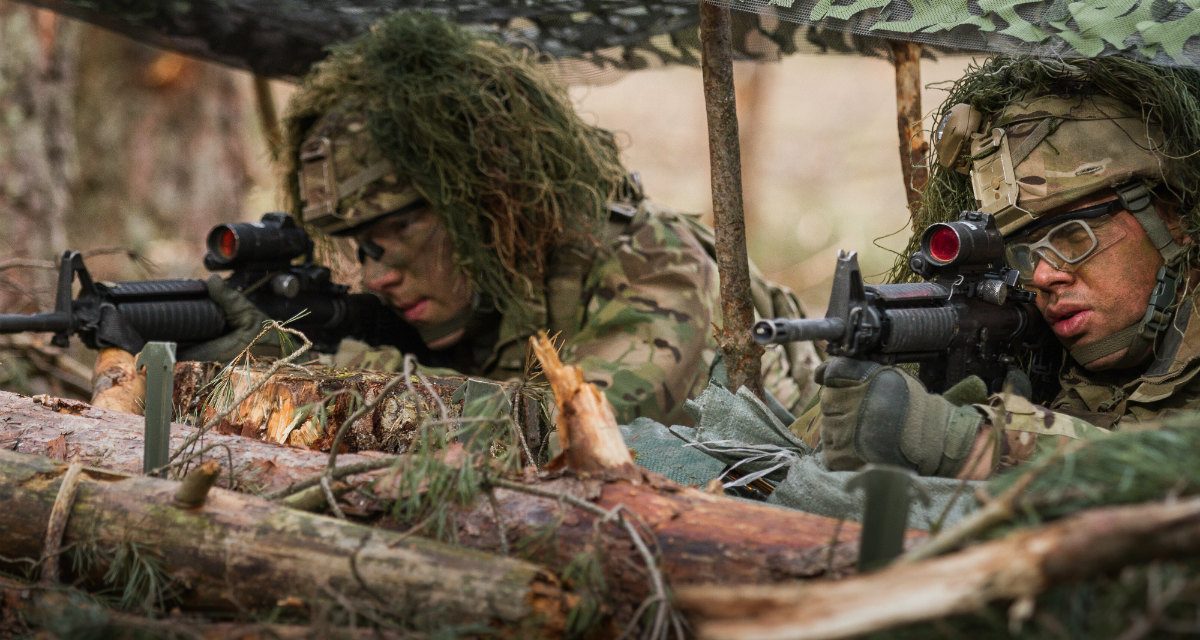 In his seminal work On War, Carl von Clausewitz famously declared that, in comparison to the offense, “the defensive form of warfare is intrinsically stronger than the offensive.”

This is largely due to the defender’s ability to occupy key terrain before the attack, and is most true when there is sufficient time to prepare the defense. And yet within the doctrinal hierarchy of the four elements of decisive action (offense, defense, stability, and defense support of civil authorities), the US Army prioritizes offensive operations. Ultimately, this has led to training that focuses almost exclusively on offensive operations at the cost of deliberate planning for the defense. But in the context of a combined arms fight against a near-peer adversary, US Army forces will almost assuredly find themselves initially fighting in a defense. Our current neglect of deliberate planning for the defense puts these soldiers who will fight in that defense at grave risk.

Historically, adversaries have achieved major strategic gains when they have conducted rapid surprise attacks before the US Army was able to build sufficient combat power. Three prime examples demonstrate this point: First, during Japanese offensives against US forces in the Philippines from December 1941 through May 1942, 140,000 US and Filipino soldiers were either killed or captured, ultimately leading to the infamous Bataan Death March. The Japanese forces held a distinct advantage in their ability to attack before US forces and their Philippine Army allies reached the mobilization strength in personnel and equipment required for the defense of the islands. Second, in early November 1950 during the Korean War, Chinese forces executed their First Phase Campaign against US forces north of the 38th parallel, effectively destroying the US 8th Calvary Regiment of the 1st Calvary Division. In Gen. Douglas MacArthur’s rapid pursuit of total victory on the Korean peninsula, he neglected to advance with the adequate combat power to secure his forces in the event of Chinese or Soviet intervention. On the night of November 1, the Chinese 115th Division, coupled with the Chinese 116th Division, encircled and destroyed the US regiment, completely unaware of the mass Chinese intervention into the Korean War. Following this victory, the two Chinese divisions unexpectedly vanished back into the Korean hillsides, seemingly as rapidly as they attacked. The third example came later that month when Gen. MacArthur, refusing to believe the Chinese had intervened in such force, ordered the US Army’s X Corps to move as rapidly as possible to the Yalu River. On November 27, with the X Corps spread thin by their rapid advance, the Chinese 9th Army Group launched a massive offensive pushing all US and Korean forces under Maj. Gen. Ned Almonds’s X Corps into the sea in a rapid retrograde. These 3 major offensives demonstrate the ability of a peer adversary to detect and exploit US Army forces ill prepared to defend against a determined surprise offense.

Conversely, when adversaries have allowed US forces to build combat power safely within an intermediate staging base (ISB), they have been subsequently demolished by overwhelming joint and combined arms offensives. Examples that highlight this fact include the World War II Normandy invasion, Operation Desert Storm, and Operation Iraqi Freedom. In each of these cases, the US Army massed soldiers and material, unmolested, preceding an eventual total military victory.

In the modern context, should armed conflict emerge, the US Army’s near-peer adversaries in Europe and Asia will likely not allow US forces to build combat power and seize the initiative through an overwhelming offensive. Rather, it is much more probable that they will conduct a rapid, surprise offensive to take advantage of both the limited US Army presence in either of these regions and the length of time it would take to reinforce these theatres during armed conflict.

Given this likelihood of facing initial offensive operations by peer adversaries, the US Army is suffering from a major training deficit on defensive operations. During the sustained campaigns of Operations Iraqi Freedom and Enduring Freedom, the relative security of US Army combat outposts from enemy firepower decreased the need for focusing on deliberate defensive operations. This has led to a generation of noncommissioned officers and officers who excel in counterinsurgency and stability operations, but have very limited experience with digging individual fighting positions, emplacing wire obstacles, felling trees into an abatis, and many other tasks associated with conducting engagement area development against a determined and capable adversary. In addition to this gap in experience, formal training institutions place minimal emphasis on defensive operations. As an example, the maneuver captains career course does an outstanding job preparing junior officers to plan and lead operations; however, the fact that only one of five graded operations orders focuses on defensive operations belies a lack of emphasis on this crucial, and highly likely, scenario for US forces. Additionally, rotations to combat training centers rarely challenge blue force companies and battalions to defend outnumbered by the OPFOR in the 1:3 combat power ratio that our doctrine mandates of our formations.

In order to address the training gaps in defensive operations for junior leaders and soldiers, Training and Doctrine Command must place a determined re-emphasis on engagement area development for both enlisted and officer trainees. Students must become habitually ingrained with the need to dig individual and vehicle fighting positions immediately upon acknowledgment of a long halt. Camouflage—of soldiers, their weapons, and vehicles—using the surrounding terrain must be enforced by all leaders during all phases of the operation. Leaders must ensure all training exercises incorporate sufficient class IV supplies—construction materials—requiring subordinate units to construct tactical and protective obstacles in conjunction with the surrounding terrain to defeat numerically superior enemy forces in a given engagement area. The maneuver captains career course should include, at a minimum, a second defensive operations order as part of its graded curriculum.

Additionally, senior leaders within the Army should also experiment with moving an armored brigade combat team (ABCT) to the White Sands Training Area in New Mexico to test a force-on-force tactical exercise against the entirety of the 1st Armored Division. Although this proposal may seem unlikely, the concept of testing a 1:3 armored force ratio ratio is an urgent necessity given that the US maintains an ABCT in Europe and another in South Korea, both of which could easily face 1:3 or even greater ratio of enemy combat power should armed conflict erupt in the near future. The defending brigade would likely be overwhelmed, an indicator of the urgent need to refocus our efforts on defensive operations. This would result in enhanced training and overall readiness of our forces to deter, defend against, and defeat an adversary seeking to overwhelm US forces before we are able to sufficiently reinforce and build up combat power. Following this ABCT “area defense” exercise, the Army could progress to a division-sized “mobile defense” exercise in order to integrate a sizeable striking force capable of defeating a large, overextended enemy. This type of exercise requires a large blue force, a sizeable OPFOR contingent, and considerable terrain in order to execute properly, but the training and lessons learned would prove invaluable to the force.

Since the Civil War, the US Army has been forced to conduct retrograde operations against a range of peer adversaries. Yet sadly, as T. R. Fehrenbach noted in This Kind of War, “The tragedy of American arms . . . is that having an imperfect sense of history, Americans sometimes forget as quickly as they learn.” This is why, in addition to conducting the classic “area” and “mobile” defense, the US Army should also institute deliberate training of retrograde operations (delay, withdrawal, and retire), with particular attention given to delaying operations. Retrograde operations are conducted to improve a tactical situation or prevent a worse situation from developing, and in delaying operations, a force under pressure trades space for time by slowing down the enemy’s momentum and inflicting maximum damage without, in principle, becoming decisively engaged. Our forward-deployed units in Europe and Korea in particular must be prepared to delay potential peer or near-peer aggressors, trading space for time in order to facilitate the rapid buildup of follow-on forces. Delaying operations, like all retrograde operations, are acutely challenging. They entail an array difficulties, including the likely degradation of mission command after the loss of key leaders and communications equipment. Sustainment of a force in retrograde is also particularly challenging, as forces will have to plan for cannibalization of vehicles, resupply on the move, and securing the movement of wounded personnel, all while in contact with an enemy seeking complete destruction of the formation. In December 1950, the 80th Division of the People’s Liberation Army destroyed the US Army 31st Regimental Combat Team—“Task Force Faith”—during the US forces’ withdrawal east of the Chosin Reservoir. As one of approximately fifty personnel of 1st battalion, 32nd Infantry who survived Task Force Faith’s retrograde east of Chosin, Lt. Hugh R. May later remarked, “I cannot remember one minute spent on training for a withdrawal action for anything above a squad or platoon. The lack of this knowledge was quite evident at Chosin.” Given the historical tragedy of the destruction of the 31st Regimental Combat Team during its retrograde, how many of today’s Army units above the platoon level can say they are thoroughly trained in conducting a retrograde of any type? Units must take the time to exit all field training exercises through a deliberate execution of a retrograde operation, remembering the hard-fought lessons of Task Force Faith.

Despite these current challenges, the US Army remains the most capable land-based combat force the world has ever known. Our ability to conduct combined-arms maneuver in a joint campaign remains unmatched. However, our lack of focus on defensive operations is a tremendous gap in our ability to retain key terrain. The Army should make a deliberate effort to address this gap, re-emphasizing the defense in training and doctrine and conducting defensive operations at combat training centers, in order to ensure we can defeat a numerically superior enemy, buying time to conduct decisive offensive operations, where we can bring the full complement of American combat power to bear.