Marine Corps Gender Desegregation is Overdue and Only the First Step 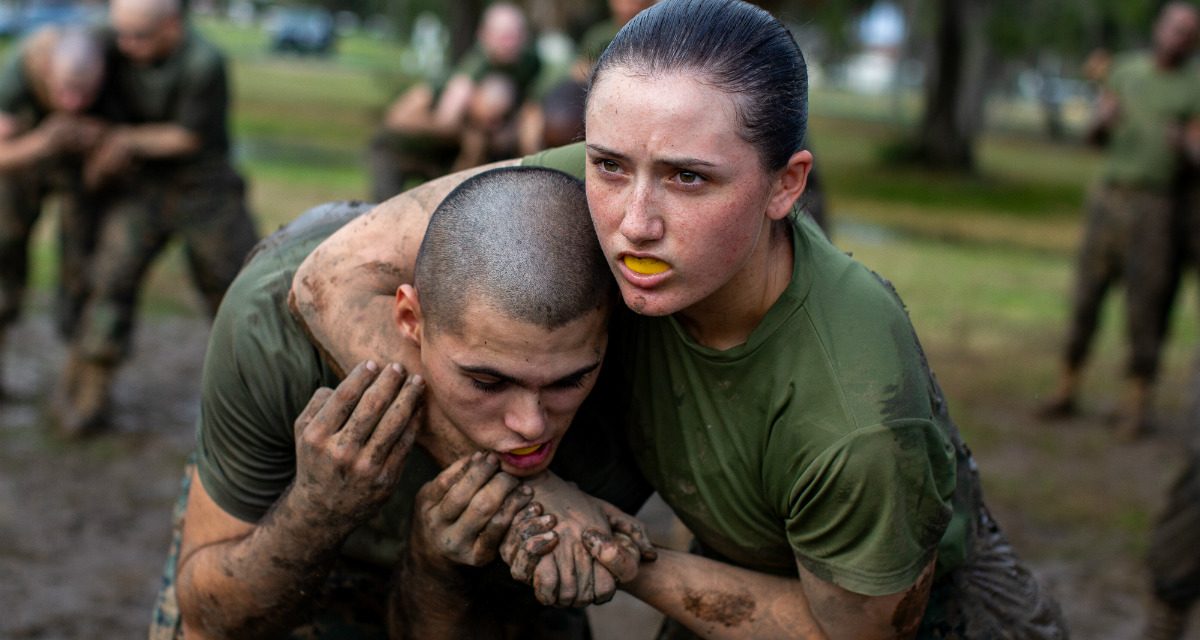 Women Marines have served since at least 1918. In the century since then, woman have served their country and the Marine Corps with distinction, including most recently in Iraq and Afghanistan, where thousands deployed during the United States’ post-9/11 wars. Still, women were excluded from ground combat until 2013, when the Pentagon announced an end to the frontline ban, and 2015, when Secretary Ash Carter fully instated the change. As a result, service branches technically integrate women at all levels, presumably even in boot camp. But the Marine Corps remains an exception in this regard: it is the only service branch that trains women and men separately. At least it was, until December, when President Donald Trump signed the National Defense Authorization Act for Fiscal Year 2020 (NDAA) into law with a provision specifically requiring gender desegregation in Marine Corps recruit depots. This is a positive step: a host of research shows not only that including women in combat units offers clear benefits, but that “integrated training . . . appears to improve cohesion and improve the physical readiness of women more than gender-specific training alone.” Moreover, related scholarship and accounts from servicemembers suggest desegregated training can help undermine conditions that give rise to widespread sexual harassment and assault.

But while training desegregation is overdue, it is only one piece of a much-needed cultural and leadership shift that the military must take seriously if it wants to recruit and retain women. The military environment still appears disproportionately hostile toward female servicemembers. Across branches, women report gender bias and discrimination, sexual harassment, and a lack of women mentors as reasons why they leave military careers. Comparatively few women advance to high ranking military roles. In a 2019 Stars and Stripes poll, 68.5 percent of female active servicemembers or veterans said they experienced gender-based discrimination in the military. Comparatively, 6.4 percent of men reported such discrimination. An estimated 65.8 percent of women say they were sexual assaulted or harassed, compared with 6.1 percent of men. According to the Department of Defense’s FY 2014 Annual Report on Sexual Assault in the Military Annual Report, 62 percent of women who reported military harassment or violence say they faced professional retaliation.

These issues are particularly pronounced in the Marine Corps. Though the number of female Marines has doubled since the mid-1990s, the service still has the fewest women of any branch. A 2016 study of female Marine generals concludes that Marine Corps “efforts to recruit, develop or retain women [have] been minimal” and identifies a “labyrinth” of “institutional, social, and personal barriers women encounter when seeking high-level positions.” This research finds that in order to overcome pervasive gender bias and achieve higher positions, many female Marine generals must settle for short-term career goals. This is because these women are proud to be Marines, identify strongly with Marine Corps’ values, and must navigate a discriminatory institution.

In DoD’s FY 2019 Annual Report on Sexual Assault in the Military, one in every ten female Marines reported military sexual assault. This is twice the reporting rate of the Army or the Air Force, and the highest in the military. Serious allegations of sexual abuse within Marine Corps ranks proliferated over the past few years. This includes the exposure of a popular, secret Facebook page hosting naked or sexual photos and videos of women Marines accompanied by violent language. Writing on this and other aspects of military culture, former Marine Kate Hendricks Thomas recalls bringing a knife when she showered while deployed to Iraq because she was warned fellow service members may assault her. She concludes that women are “othered” and “struggle to feel fully part of the Marines.” In 2017, former Marine Alexander McCoy contended that sexual harassment results from a culture “the Marine Corps has created and done little to change.” He recalls, “The message we got was clear: Female Marines are disgusting and worthless and physically unsuited for the service. . . . Every interaction I had with female Marines in basic training, and every reference to them, seemed intended to foster contempt.”

The 2020 NDAA requires the Marine Corps Recruit Depot at Parris Island, South Carolina to desegregate within five years. It further requires the Marine Corps Recruit Depot in San Diego, California—which has never fielded a female recruit—to desegregate within eight years. This is a constructive step towards fully integrating women into all services, and it comes at a time when the Marine Corps—and the military in general—is seeking a recruitment influx. Marine Corps service ostensibly has much to offer women: female servicemembers highlight Marine values, equal pay, camaraderie, rigorous training, and familial service history as motivating factors. Still, widespread professional bias, harassment, and assault make clear that the Marine Corps is failing women recruits.

Desegregating depots may help alleviate some of these barriers by ending a training system that treats women as unequal and subordinate. But it is not a panacea. The Army implemented gender-integrated basic training for some positions, like military police, in 1977 and fully instituted it in 1994. The Navy and the Air Force also integrated by the mid-1990s. Yet across branches, the estimated prevalence rate of sexual violence has increased. Integrating Marine Corps boot camp is a necessary and belated step, but these issues do not begin and end in boot camp, so the military’s attention to them should not end there either. The Marine Corps must take this opportunity to culturally disentangle military service, sexism, and violence. All service branches must do the same.

Meredith Loken is a non-resident Fellow with the Modern War Institute and an Assistant Professor in the Department of Political Science at the University of Massachusetts, Amherst. Follow her on Twitter: @meredithloken.