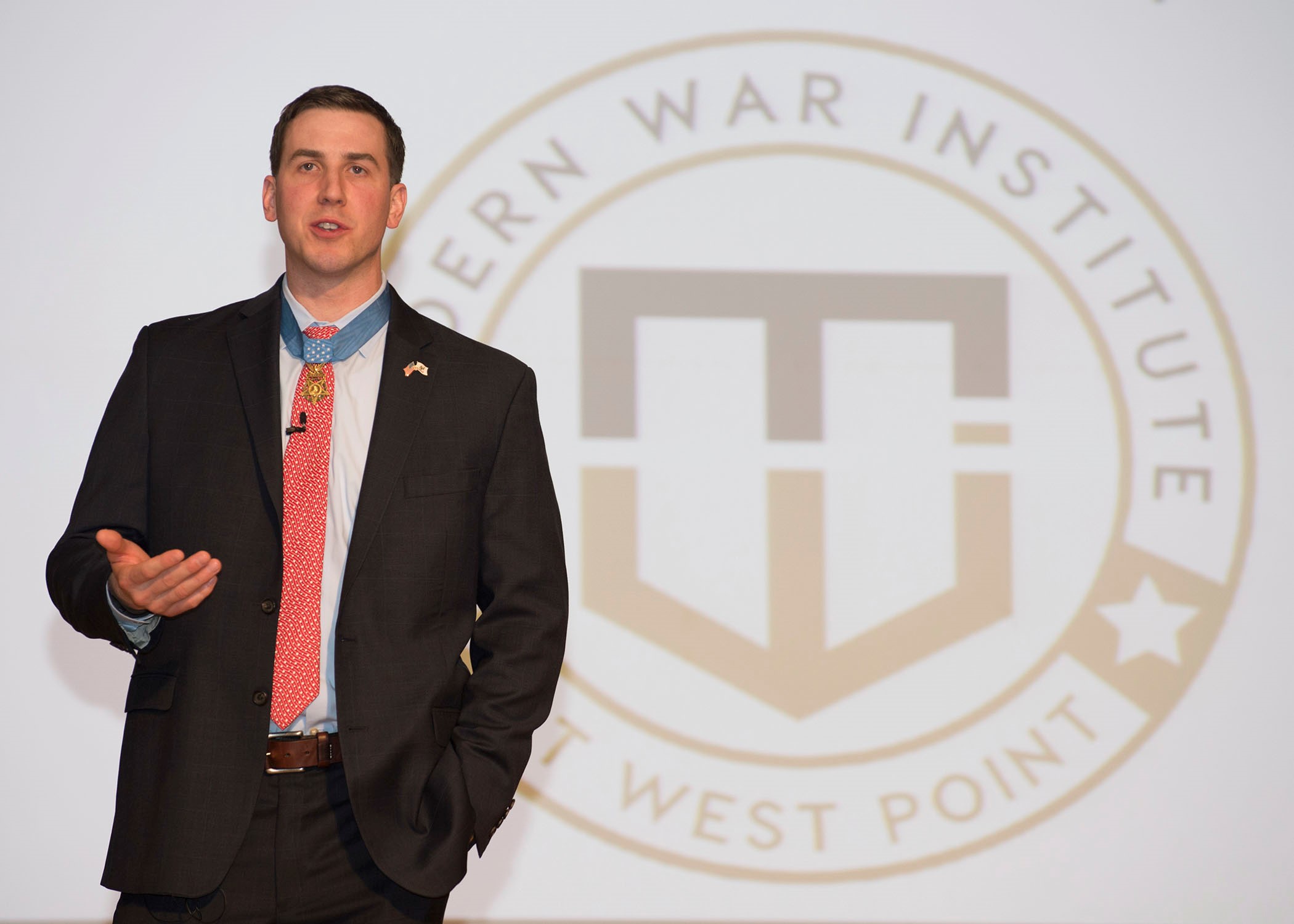 On a hot summer morning in 2008 at a Vehicle Patrol Base near Wanat Village, in Kunar Province, Afghanistan a firefight broke out between a platoon of American soldiers and over 200 Anti-Afghan Fighters.  SSG (ret) Ryan Pitts was serving as a Forward Observer in the 2nd Platoon, Chosen Company, 2-503rd Infantry Regiment, 173rd Airborne Brigade when he was near mortally wounded after taking an open barrage of shrapnel to his legs and parts of his upper body. He spoke of his ordeal, and the heroism of his fellow soldiers, to a packed Robinson Auditorium on Monday, April 18 for a Modern War Institute Speaker Series event.

The major lesson of the “Battle of Wanat,” according to Pitts, was training.  “It’s all about training,” he told the crowd of roughly 500 cadets.  “We all reverted back to training and as platoon leaders, you must remain vigilant to train your men and women every single day.”

“They were everywhere,” Pitts said. “Three-hundred-and-sixty degrees. And as close as five meters from our position.” He radioed for help and, to give a sense of how surrounded he was, the commanding officer on the radio could hear the enemy talking in the background over radio transmissions made by Pitts.

“I realized I was alone,” he said. “Nobody was moving.” But when notified his Commander, he said there was no one to send. He was told, “Nobody was coming,” before adding: “I don’t resent [the officer] who told me that. He was at my wedding. He’s been to my house. What that taught me is that the team and the mission are bigger than any one individual.”

But at that very moment, SSG (ret) Pitts thought he was going to die. His main goal at that point was not letting the enemy take him alive. “I didn’t want my family to see my head cut off on YouTube,” he said.

Unable to move yet armed with only a grenade launcher, he began firing grenades at an enemy he could not see. Reinforcements from another platoon and some Apaches soon came to his aid.

“There was valor everywhere that day,” Pitts said, his eyes beginning to tear up. “The real heroes are the guys that didn’t come home.”

“In two years at the academy, I have never been inspired the way I was today,” Cadet Joshua Martindale said of the speech. “SSG(R) Pitts reminded me that the men and women we serve deserve our best.”

In addition to his lecture, SSG (ret) Pitts also observed a cadet Operations Order presentation during a Military Science 300 (Platoon Operations) class and dined with the Corps.