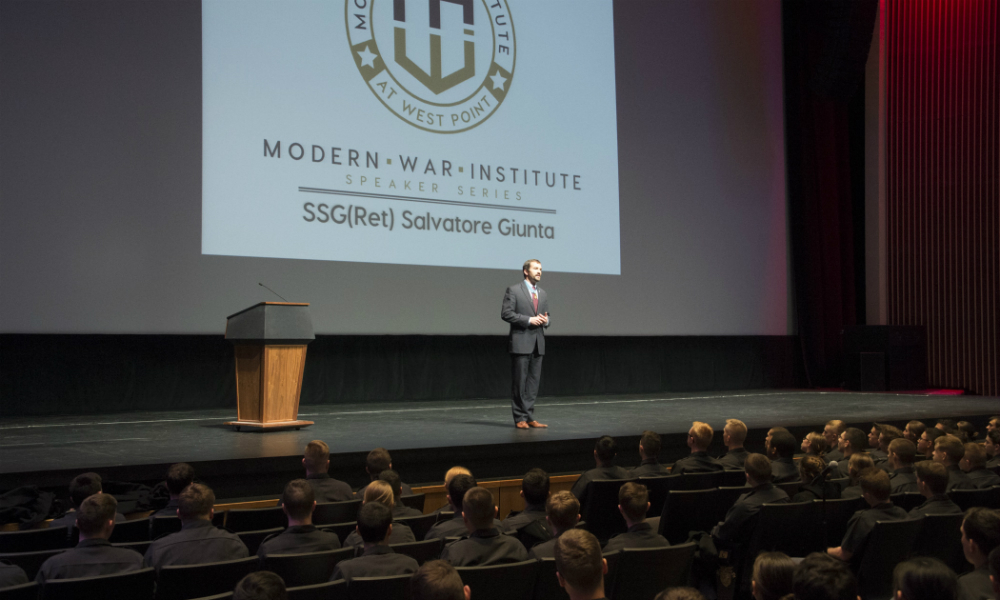 For the Modern War Institute’s first Speaker Series event of 2017, retired Staff Sgt. Salvatore Giunta, the first living Medal of Honor recipient since the Vietnam War era, addressed a packed Ike Hall and delivered a moving lecture about the importance of leadership and trusting one’s team. Receiving a standing ovation from over 800 cadets, Giunta recapped his life trajectory from Subway clerk to member of the 173rd Airborne Brigade. He joined the US Army after 9/11, he admitted, “for naïve reasons . . . as a way to leave Iowa and to jump out of planes.”

Giunta learned early on the difference between basic training and real-life combat. As a paratrooper, he recalled the feeling of jumping into “the unknown,” a place too hostile for tanks or other combat vehicles. He stressed the need, in training, of “going to exhaustion,” whether that includes sleep deprivation, boredom, or extreme hunger. As a metaphor for the importance of one’s team, Giunta used the analogy of trying to bench-press a 45-pound bar after a hundred reps and relying on one’s spotter, who can lift it with their fingertips. “No matter how hard or how easy something is, sooner or later there will come a time when you can’t do it yourself,” he told the cadets.

The lesson of perseverance hit home in October 2007, when an attack killed one of his unit’s scout leaders, a model leader whose physical presence was as dominating as his tactical expertise. “He was the best of us,” Giunta recalled. If he could be killed, he remembered thinking, what does that mean for the rest of us? Ultimately, “We had to do the same with less,” he said.

Days later, while on patrol Giunta and members of his unit were ambushed by the enemy, losing several men, including their medic within the opening seconds. Searching in vain for concealment, Giunta was shot but managed to save a number of his men while killing the enemy.

“This medal changed my life,” he said. “But it isn’t mine, it’s ours. It’s this idea of service.”

Training the newer young privates was something he was most proud of. “To watch soldiers succeed at something you taught them—that’s awesome,” he said.

In closing Giunta stressed the importance of teamwork. “It’s about the best we can be and we can’t be that alone. You’re only as strong as the team you bring to the fight,” he said.

“His talk really put things in perspective,” said CDT John Stockhausen (A2, Class of 2017). “I’ll take what he said with me to my unit and the soldiers we’ll all have the privilege to lead.”

“I thought [Staff Sgt. Giunta] really showed the applicability of military science and a put a face on the values and things we learn as cadets,” added CDT Randy Hahn (D2, Class of 2020).