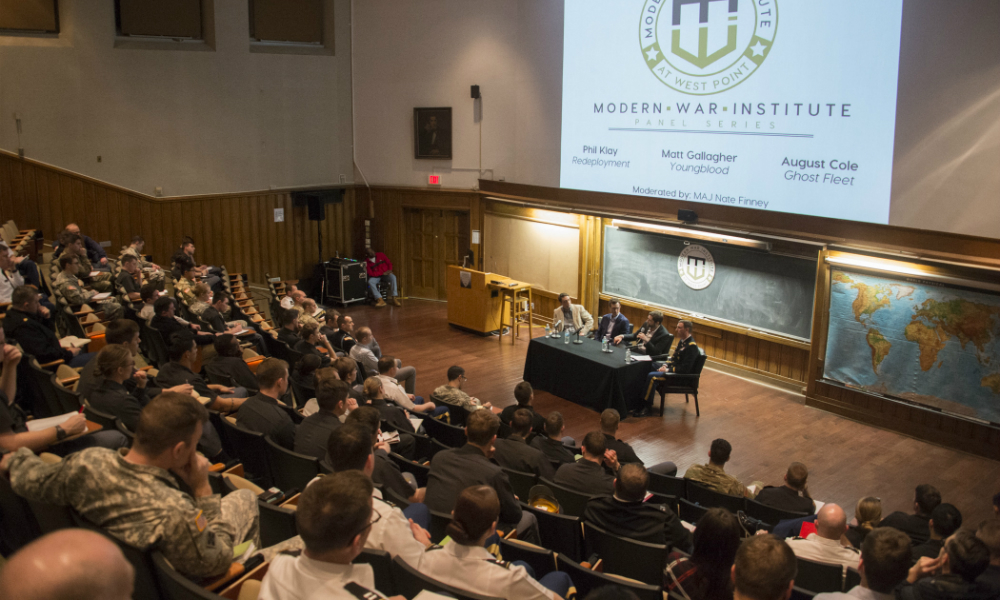 Why fiction? The question was the focus of a writing panel hosted by the Modern War Institute on February 13. “Everything is possible,” was the answer given by Matt Gallagher, a former US Army captain and veteran of the Iraq War, whose debut novel, Youngblood, was published last year. “[As the author], you’re not limited by reality.”

Gallagher was joined on the panel by award-winning author Phil Klay, whose 2014 collection of short stories, Redeployment, won the National Book Award for Fiction, and by August Cole, a non-resident senior fellow at the Atlantic Council and co-author of Ghost Fleet: A Novel of the Next World War. The panel was moderated by Maj Nate Finney, an MWI non-resident fellow and editor of The Strategy Bridge.

“I found fiction to be the most useful tool to understand conflict and technology and their intersection and what’s coming next,” said Cole.

Gallagher kept a blog as a platoon leader in Iraq and recalled how the “mere act of writing about [war] made it less complicated.”

Klay urged the audience of roughly 100 cadets to write about “whatever that inner voice that’s tugging at you when you’re doing PT in the morning. Stay true to that vision and the rest will work itself out.”

The beauty of fiction, he added, is it allows readers to “enter into an experience,” rather than for them to “be given didactic points about, say, counterinsurgency.” Fiction also allows readers to experience combat from the enemy’s perspective in a way that non-fiction writing cannot.

“Nobody wanted to talk about conflict with China,” Cole told the audience, describing his book about what an future war with China might resemble.

In terms of writing tips, Klay urged the audience “to read a lot.” He added that the writing process takes time and that every one of the stories in Redeployment was rewritten fifteen times.

When asked by a cadet about the role of the fiction writer in today’s political climate, Klay answered that “the narrative matters more than the facts and so fiction writers have a visceral relationship with that.” He added, “It’s just me trying to fulfill my duties of citizenship, though I’m leery of fiction writers being too involved in politics in these strange times because we don’t know what we’re talking about.”

Gallagher mentioned that fiction writing is not only for established authors but even mentioned that Gen. Stanley McChrystal and President Barack Obama had dabbled in short story writing.

Cadets found the panelists to be honest about the craft of writing.

“They talked about the importance of having ‘radical empathy,’ which was really interesting,” said Cadet Jonathan Sessions, ‘18, B3. “When I heard that, I started thinking about the Clausewitzian fog of war, and how that same type of empathy is useful in that context.”

“I liked hearing about the formal methods each author uses to write and put their stories together,” said Cadet Natalie Dent, ‘18, H4, “especially the idea that it’s about communication, not just expression—about exploring other sides and other perspectives.”