MWI Video: The Battle of Mosul, with Col. Pat Work 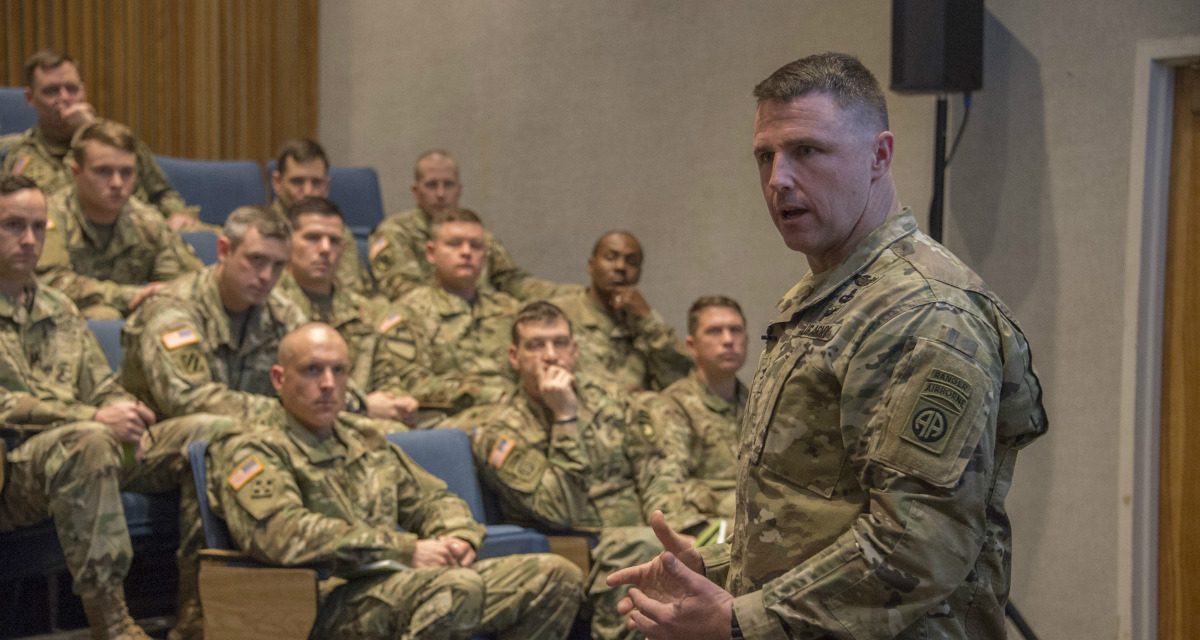 On July 9, 2017, Iraqi Prime Minister Haider al-Abadi declared the city of Mosul retaken by Iraqi Security Forces who had spent months fighting to dislodge members of the Islamic State of Iraq and Syria (ISIS). Working alongside and advising those Iraqi forces in the months leading up to al-Abadi’s declaration was the 82nd Airborne Division’s 2nd Brigade Combat Team. The brigade’s commander, Col. Pat Work, recently visited West Point and spoke at an event hosted by the Modern War Institute about the the intense fight to wrest control of the city from ISIS and what he learned about the group’s fighters, how to succeed when partnering with host-nation forces, and the unique challenges of fighting in urban settings.

Col. Work told the audience of nearly 200 West Point faculty and cadets that one of the key things to understand about ISIS is that the group is capable of fighting largely like a conventional force. “If ISIS is anything,” he said “it is an army.” During the intense fighting in Mosul, ISIS fighters operated in teams of three to five, with mortars fired in support of ground forces, and with commanders exercising effective command and control of all ISIS forces.

ISIS had clearly intended to make a strong defensive stand in Mosul, a symbolic city where ISIS leader Abu Bakr al-Baghdadi announced the establishment of the group’s caliphate in 2014. That meant that by the time Iraqi Security Forces began operations—enabled by Col. Work’s brigade—to retake Mosul, the city had been transformed essentially into a fortress. ISIS fighters had knocked out walls, connecting houses and allowing them to move freely inside. The group had even turned a hospital in the city into what Col. Work called a sort of “ISIS Pentagon.”

As a partner to the Iraqi Security Forces, the brigade’s role was to enable operations planned and conducted by Iraqi counterparts. Col. Work described some of the lessons he and his brigade learned. To be successful in this type of mission requires one characteristic in particular. “When it comes to advising,” he said, “there’s a humility we need to have.”

In this case, that means understanding their Iraqi counterparts. The first thing Col. Work said he and his staff needed to appreciate is the unique history of the Iraqi Security Forces, and in particular of the generals in command of the fight against ISIS. “They were lieutenants and captains during the Iran-Iraq War in the 1980s,” he said. “Then they fought in and were dominated during the First Gulf War.” These experiences inform the way they engage in the current fight.

Further, Col. Work said, just as his brigade was part of a broad anti-ISIS coalition, it’s important to think of the Iraqi Security Forces as a coalition itself. In the fight for Mosul, Col. Work advised an Iraqi lieutenant general who had three distinct types of forces under his command: the Iraqi Army, members of a national police force, and those from the country’s counterterrorism service. Col. Work said that in partnered operations, it’s imperative not to “over-homogenize” the partner. Working effectively together can be difficult—“We had to have legislation in our own country to force our armed services to interact,” Col. Work said, in reference to the 1986 Goldwater-Nichols Act—and US advisory forces need to understand that and constantly work to facilitate the host nation’s own internal “coalition.”

Finally, “Advise and Assist” doesn’t capture everything else that contributes to an effective partnered mission. “It’s actually all six ‘A’s of ‘A and A,’” Col. Work said. In addition to advising and assisting, “you have to ‘accompany,’” which is important in order to “assure” the partnered force. “You also need to ‘anticipate’ their needs, and to do that you need to be ‘agile.’”

The operation to dislodge ISIS involved hard fighting, clearing one street after another, and took months. But by enabling Iraqi forces to take the organization on and defeat it in its most important and heavily defended stronghold, momentum in the overall fight against the group built. “That’s why Tal Afar, a city just 50 short kilometers west of Mosul, fell in just twelve days.” And in December, just a few months after the battle for Mosul came to an end, Iraq’s prime minister officially declared victory over the ISIS in the entire country.

Watch the video of Col. Work’s full remarks below.