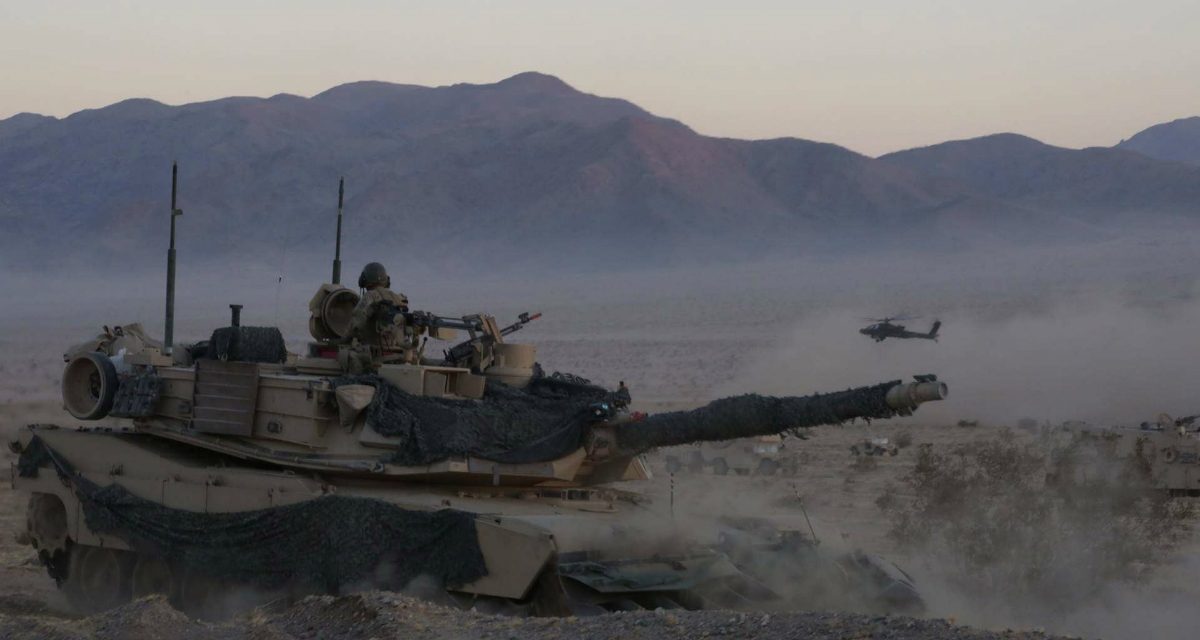 In the few days since the White House released its new National Security Strategy, there has been a deluge of analysis, breaking down the document’s contents and predicting its implications. Much has been made of the absence of climate change among specified dangers—a topic prominent in the Obama administration’s 2010 NSS and even more so in the 2015 version. The strategy’s treatment of China—and what it means for the world’s most important geopolitical relationship—has also come under scrutiny.

But what does it mean for the Army?

To be sure, the National Defense Strategy and the National Military Strategy that will both be informed by this NSS will give a clearer picture. There are examples of past NSS documents that signaled important developments that would deeply impact the Army. For example, the George W. Bush administration’s 2002 strategy prioritized preventing enemies from threatening the United States and its allies with weapons of mass destruction, a clear reference to the chief argument in favor of war with Iraq—a war for which the US Army would shoulder a heavy burden for nearly a decade. But as broad statements of strategy, such foreshadowing is not typical, and doesn’t seem to be the case with this NSS. Indeed, the NSS is not so much a strategy in the doctrinal sense of the word, with clear ends, ways, and means, but rather an aspirational statement of direction.

And yet, with only a little inference, there are a few ways in which this NSS is most likely to affect the Army.

As a candidate, the president campaigned on promises to boost defense spending. Just last week, he signed a bill authorizing a $700 billion defense budget (with the caveat that Congress must first roll back spending caps enacted in 2011). With its emphasis on “preserving peace through strength,” the new NSS indicates that heightened spending will continue. For the Army, this likely means two things: new equipment and more soldiers.

The NSS argues that for a decade, the Joint Force has been on a “procurement holiday.” It promises to “improve existing systems,” but “seek new capabilities” where necessary. What will this mean in practice? Perhaps this is an opportunity for the Army to pursue its modernization priorities—invigorating the development of long-range precision fires, a new ground combat vehicle, improved vertical lift platforms, and reliable communications networks. At the individual level, improvements in individual weapons, communications equipment, protection, and sustainment are long overdue.

References to the need to “embrace less expensive and time-intensive commercial off-the-shelf solutions” could mean that units currently deploying with custom-built and often unwieldy communications tools will now do so with the phones and tablets made by Apple or Samsung and equipped with software designed by Google. Systems like the less-than-wholly-reliable Raven unmanned aerial vehicle could be set aside in favor of quadcopters already in use by nonstate adversaries like ISIS.

While questions remain about how to grow and sustain the Army by tens of thousands, the NSS also makes clear that doing so is an administration priority. “The size of our force matters,” it says. “The United States must reverse recent decisions to reduce the size of the Joint Force and grow the force while modernizing and ensuring readiness.” While there are opportunities to grow strength within existing units to achieve higher levels of personnel deployment readiness, the focus should be broader. Just as important as right-sizing the Army is making sure the added people are aligned against the jobs necessary to combat emerging threats. The cyber community is at the fore of a new recruiting model, directly commissioning proven programmers and data experts as leaders in the force. That model, of course, is not workable for all parts of the Army, but the commitment it demonstrates to getting the right people in the right jobs will be critical as Army end strength increases.

The NSS goes considerably further than recent strategies in its confrontational tone toward China and, to a lesser extent, Russia. The 2015 NSS made fewer references to China, and the majority of those either were neutral or expressed a positive view of US-China relations. The new version directly implicates China in everything from intellectual property theft to militarization of the South China Sea to fentanyl trafficking that fuels the US opioid crisis. Almost immediately this week, Beijing condemned what it called the White House’s “Cold War mentality.” More likely than ushering in a new Cold War, though, the document reflects a reality more akin to a sort of “hot peace.”

For the Army, this could mean a decrease in military-to-military exchange programs with China. At the same time, there remains sufficient overlap in interests that intelligence sharing related to nonstate actors, and the Army’s role in it, are unlikely to see much change.

What it does perhaps do is crystallize a vision of the adversary. Both Russia and China have been featured for several years among more informal assessments of the major threats confronting the United States. But as a strategic statement of direction that will ultimately influence the way the Army trains, equips, and operates, this NSS goes further than any recent edition in specifying near-peer countries as the threats around which Army planning revolves.

For years during (and after) the Cold War, the “Fulda Gap scenario” informed the way the Army prepared for war. For the first decade of this century, to better prepare units for the realities of deployments to Iraq and Afghanistan, training and validation events focused primarily on counterinsurgency and stability operations. As operations in both countries slow, the Army’s combat training centers are making a concerted effort to refocus on core warfighting capabilities. The message of this NSS is that the Army should resource the CTCs to better replicate the threat capabilities already fielded by our adversaries. After years of preparing at the tactical level for a variety of types of operations—including the types of stability operations units have been conducting in America’s post-9/11 wars—it signals a continued reorientation that will almost certainly impact the way soldiers train and plan to fight.

Despite the changes discussed above, the new NSS indicates more of a continuation of the previous policy when it comes to day-to-day activities, operational tempo, and operational deployments than anything else. The final section of the NSS, which describes “The Strategy in a Regional Context,” uses the words “maintain,” “continue,” and “retain” as opposed to verbiage that indicates a significant change.

In the Indo-Pacific region, the military “will maintain a forward military presence capable of deterring and, if necessary, defeating any adversary.” Likewise, in Europe, the military “will continue to strengthen deterrence and defense” on NATO’s eastern flank. While there is no specific mention of the Enhanced Forward Presence mission, the Army should expect to see a continuation of units rotating though Poland, the Baltics, and Georgia. In the Middle East, “we will retain the necessary American military presence.” Thus, there appears to be little indication from the document, that there will be a significant change to the mission, posture, and rotation of troops through the Korean Peninsula, Europe, or Afghanistan and Iraq. The most observable changes can be expected to occur at the senior level of the Army as divisions, corps, and higher levels are likely to conduct planning exercises against North Korea and other threats described in the NSS.

Likewise, the status quo will, in all probability, be maintained when it comes to defending the homeland and pursuing threats abroad. Despite President Trump’s expressed desire to build a border wall and his priority to reform immigration, there is nothing in the document to indicate that the military will take an increased role in border defense. In terms of pursuing threats to their source, the NSS states that “the U.S. military . . . will take direct action against terrorist networks and pursue terrorists who threaten the homeland . . . regardless of where they are.” Again, this represents a continuation of current policy leveraging host-nation capability, special operations forces, drones, and when required, unilateral action to defeat these threats.

As the final section of the NSS outlines, the military remains a key player in securing American interests abroad, but does so in concert with equally emphasized political and economic efforts. And, rightfully so. Placing primacy on political and economic engagement provides an opportunity for the Army, and the military at large, to focus time and treasure on training for current and emerging threats. One theme is clear—under this NSS, the Army can expect to remain engaged globally to reassure and forge deeper relationships with allies and partners, while reasserting America’s stature as a positive, stabilizing force.

One final note of caution: defense spending is somewhat cyclical as the national political pendulum swings. Given ever-present concerns over the national debt—which led to the defense spending caps in place for the past several years—it is unlikely that any defense spending boon is sustainable in the long term. So while the equipment and training the increased budget is likely to provide will be valuable, expectations should, in reality, be cautious.

Col. Liam Collins is the Director of the Modern War Institute (MWI) at West Point, Maj. Rick Montcalm is a scholar with MWI, and John Amble is MWI’s Editorial Director. The views expressed in this article are those of the authors and do not reflect the official policy or position of the Department of the Army, Department of Defense, or the US government.