Who Should We Save? On Perilous Judgments and Military Moral Thought 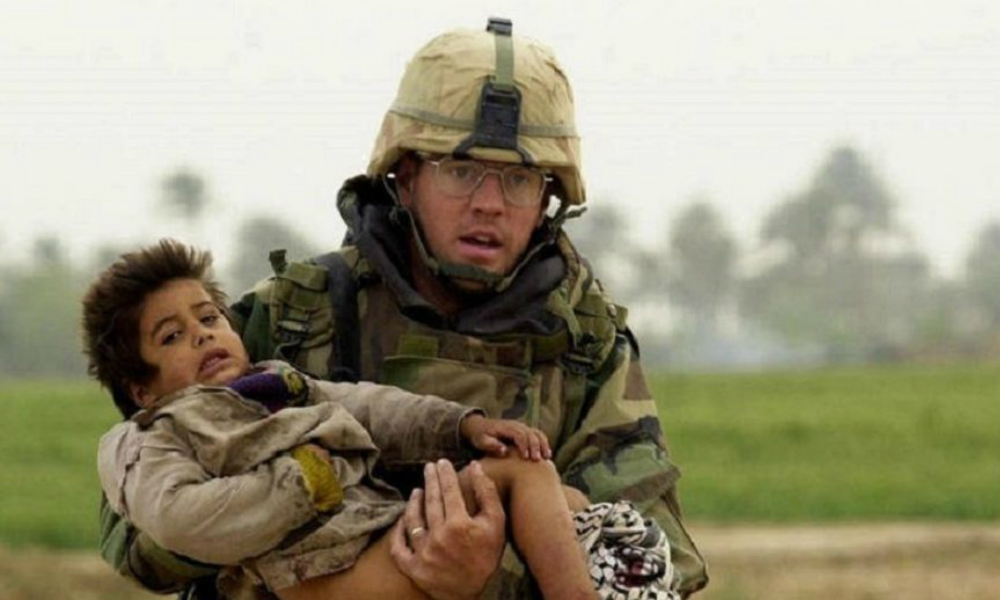 Who should we save?

That’s the question a Johns Hopkins doctor has been asking, and who was recently profiled in a thought provoking New York Times article. More specifically, “When a surge of patients – from a disaster, disease outbreak, or terrorist attack – overwhelms hospitals, how should you ration care? Whose lives should be saved first?”

The doctor’s question was part of a study designed to engage the public, pre-crisis, on medical scenarios in which resources are vastly inferior to requirements – a grim situation in which seemingly impossible choices must be made to save whatever lives might be saved. The findings were as interesting as they were anticipated: the citizens involved in the project “tended to favor saving the most lives or years of life by prioritizing people who were expected to survive their current illness or life the longest after being treated. However, many also said that a lottery or first-come-first-served approach would be appropriate for patients who had roughly equal chances of benefiting.” But some participants announced their unease at the prospect of extreme, hardline limits to care, as one person stated, “Health care providers are not God,” and another said, “I don’t think any of us should choose whether a person should live or die.”

But some do decide life and death: military officers. While clearly not deities, at the very least they often choose precisely who is less likely to live and potentially who is more likely to die. In contrast to the medical profession, which often focuses on the health and survival of one patient at a time (perhaps explaining the discomfort with such choices) – the military profession is concerned with the health and survival of one society at a time (fixing a larger “body” politic). The two professions therefore have similarly important duties and obligations, albeit encountered on different scales.

One story, emblematic of this military experience, comes from journalist Alex Berenson’s reporting on the recent Afghan war in “Lost in Kandahar,” in which he described a young Afghan girl’s plight and the American military’s response (please bear with the image – it’s transcribed from an Amazon Kindle Single): 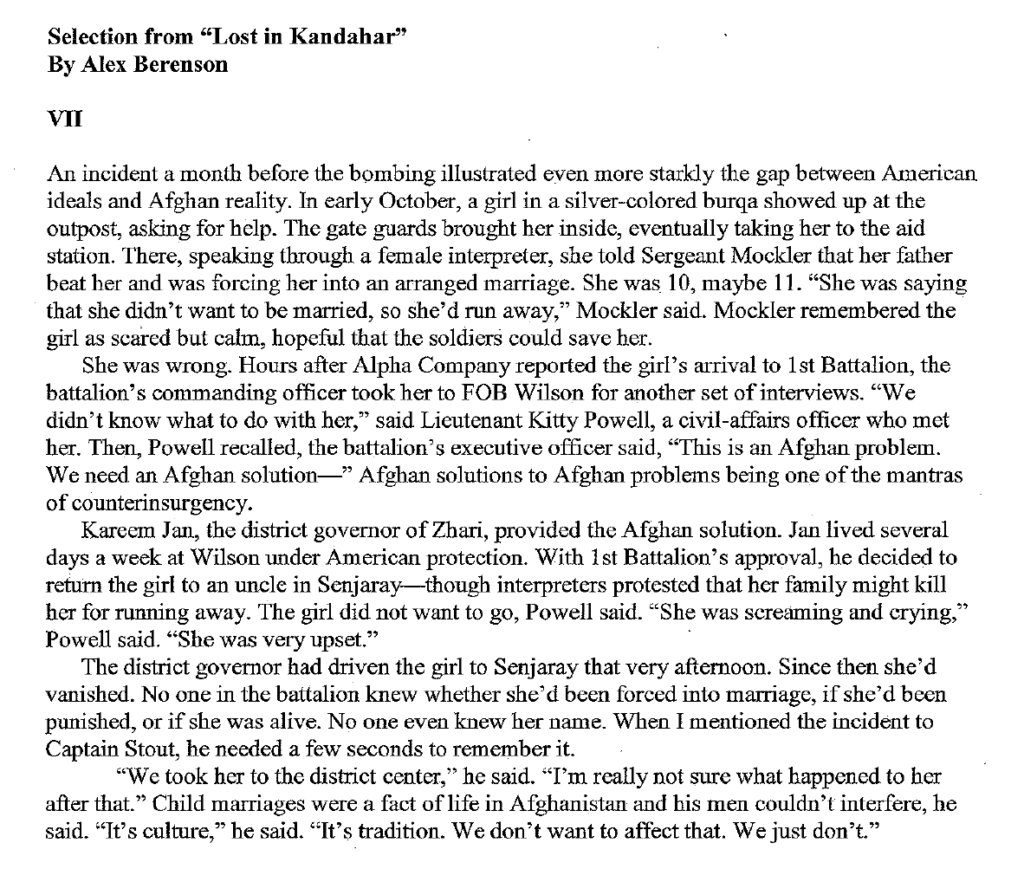 The officer’s choice: take her in and save her, yet risk a cultural dispute – or send her back to a tortured existence to maintain strategic relationships amidst a volatile local power dynamic. The contrast is stark. Profession versus personal. Strategy versus decency. An impossible choice, not unlike our doctor’s query.

One might reach for the quick response, a default setting, that the military should always privilege the macro-effort – the many over the few (or one). But as with most things, this is misleading, as the simple isn’t always the correct. What if the girl had critical intelligence? What if you knew with absolute certainty her family would either rape or murder her? What if the girl’s abdication could provide leverage to remove a key figure from the current local power structure, thereby improving your strategic position?

Perhaps, instead of focusing on answering the specifically unanswerable question (Who should we save?), it might be more fruitful to focus on the broadly answerable question (How should we judge?). How ought military officers, when in such unenviable positions, frame their moral thought processes, to make solid decisions?

Let’s lay out some principles. First, the tyranny of context abounds. The New York Times article quotes a philosopher who counsels we should be “extremely sensitive to context,” and further reminds us that each situation is unique. In a military situation, that begins with distance, specifically, the distance between an officer “on the ground” and one “back at headquarters.” While “higher” commands shouldn’t be disregarded, they should be diminished; the officer in close proximity ought to outweigh that distant headquarters’ radio voice. Second, as much as possible, one’s personal culture (i.e. religious faith, regional values, etc.) should not be the leading moral light in such a decision – this is the tension between personal and professional values. For example, my faith background is Lutheran and Minnesotan, and while that may inform and underpin my judgment to some important extent, it should never dominate my thinking or be at the forefront of my decision-making. Why? Because in a military force, not everyone (or, perhaps anyone) is going to share these particular values – and to be effective military forces must coalesce and cohere around a commonly held set of values (in this case, those of the Profession of Arms). Third, we’ve got to have a framework for judgment and practice these skills beforehand (as Roberto Unger once said, “the task of imagination is to do the work of crisis without crisis”). The simplest judgment drill I’ve encountered comes from Emile Simpson’s War from the Ground Up, in which he advises military leaders to ask: Can I? Must I? Should I? Of course, the emphasis on the third, and toughest, question – while the first asks if you are able, the second inquires to necessity, but the third is the greatest hurdle of them all…and what makes pre-crisis practice imperative if one’s military honor and mental health is to survive such decisions intact.

So – would you have saved the Afghan girl? Why? Why not? How would you decide?

[Photo source: Warren Zinn, AP via Army Times; March 25, 2003, Pfc. Joseph Dwyer 26, from Mt. Sinai, NY was photographed carrying an Iraqi boy named Ali who had been injured during fighting between the Army s 7th Cavalry Regiment and Iraqi forces near the village of Al Faysaliyah, Iraq. Dwyer, 31, was found dead on June 28 of an accidental overdose in his home in Pinehurst, N.C., after years of struggling with post-traumatic stress disorder, the Army Times later reported.]

** This article originally failed to credit the photographer of the above photo and implied the photo was taken in Afghanistan, not Iraq. We regret the mistake.