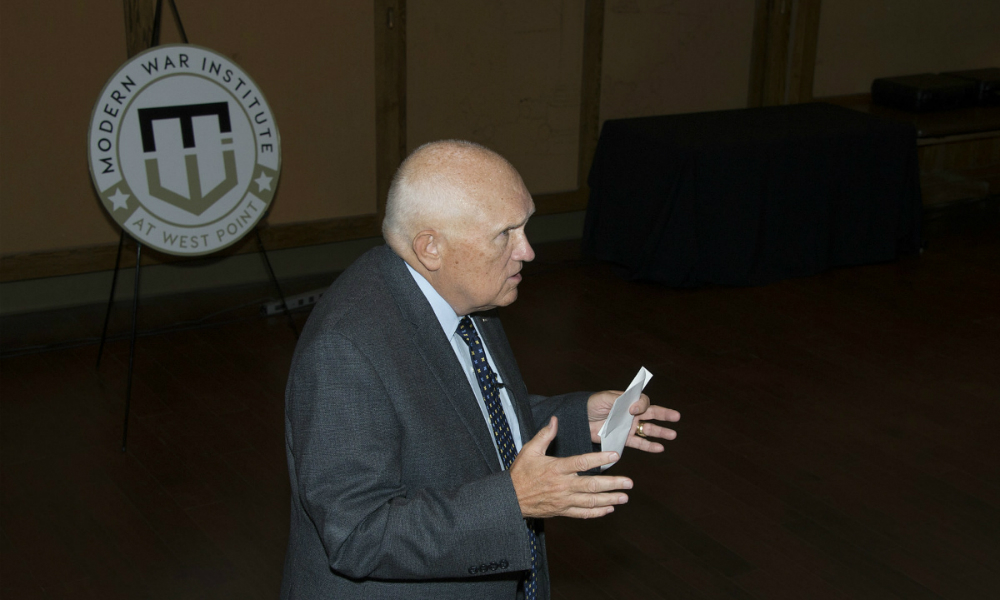 On October 19, retired Maj. Gen. Robert Scales, an MWI Adjunct Scholar and FOX News military analyst, discussed the future of the US Army with a roomful of cadets and faculty. Relaying a series of “war stories,” vignettes and analysis from World War II and his time as a battery commander during the Vietnam War, Major General Scales argued that the “Army has become afraid of the future.” He presented a brief overview of the long history of military innovation, making the case that the US Army that emerged from Desert Storm—which formed the basis of his analysis of the war, A Certain Victory—favored “mounted weaponry.” The use of airpower was seen as ascendant, and this would shape the advent of programs during the 1990s like the Future Combat Systems (FCS) and Objective Force, as well as the push for net-centric warfare, the “unblinking eye,” and greater interdependence, or “jointness.” But Scales claims the technology was not ready and the Army was never fully onboard with light maneuverable units. By 2008, the FCS was effectively killed. “When the technology is immature, we can’t fulfill the concept with the material,” he said.

The trouble with Desert Storm, according to Scales, was that it was an outlier of sorts where “the enemy put up little resistance,” and in a “one-sided contest, everything worked.”

Since 9/11 and the War on Terror, the type of warfare that is ascendant is what Scales called “dismounted forces,” which explains why militaries across the globe are “shedding themselves of their mounted impediments.” “The way we fight,” he added, “is moving away from the mounted approach to warfare—shock and awe, effects-based warfare. Our enemy knows they cannot fight us at sea or in the air, so they are forcing us to confront them on the ground.”

Scales says that this new type of combat requires the Pentagon to shift more resources—read: money—to keeping the infantry, which is doing the bulk of the dying in this dismounted warfare, alive. He said this can be done cheaply by doing a better job of finding the enemy, which includes drones and a modern version of the post-Desert Storm “unblinking eye.” “This isn’t Star Wars, this is Popular Mechanics,” he said, referring to the operability, ease, and cost of these improvements.

He believes that technology exists to make soldiers more networked and prepared through virtual simulations for combat scenarios when they initially deploy, citing the Vietnam data that 80 percent of those killed die in the first two months of their combat tours and that units break down psychologically before they break physically. “Why not have a Top Gun school for our small units?” he asked rhetorically.

Not everyone in the audience was convinced of his argument. CDT Matthew McCormack, C4 and class of 2016, questioned his logic but agreed that the Army should be better resourced. “Why can we go to a Wal-Mart and buy better equipment than from a supply depot?”

Scales was invited as part of the MWI Speaker Series to lecture on “the strategic importance of tactical dominance.”