The Defense Department Just Published a Summary of the National Defense Strategy’s Irregular Warfare Annex. Here’s Why It’s so Significant. 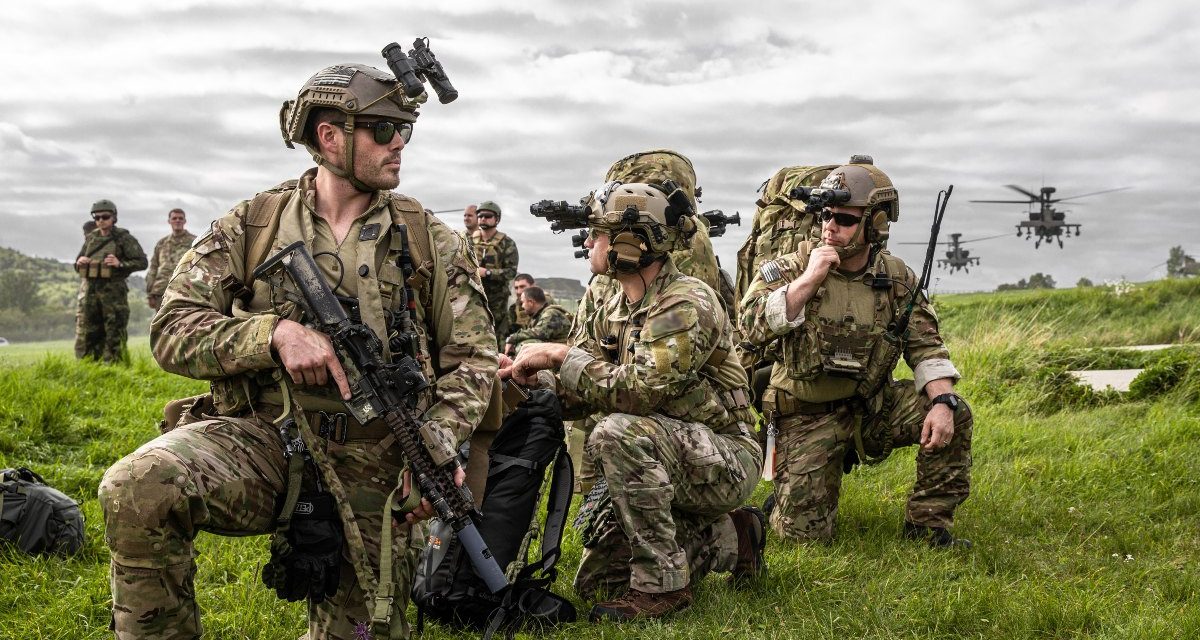 This week, the Defense Department released an unclassified summary of the Irregular Warfare (IW) Annex to the National Defense Strategy. It declares that, with respect to IW, the department will maintain “sufficient, enduring capabilities to advance national security objectives across the spectrum of competition and conflict.” Renewed focus on great power competition suggests a shift away from counterterrorism and counterinsurgency missions, but no one should interpret this shift to imply the wholesale abandonment of the relevant toolsets and expertise of IW.

Instead, the IW Annex represents an approach to state competition that is attuned to the competitive landscape and hostile states’ strategies against the United States. Adopting this approach requires rethinking what constitutes IW, how IW fits into interagency frameworks for competition, and the ability for IW to proactively contest malign activities short of conflict.

Irregular Warfare and the Competitive Landscape

As the National Defense Strategy asserted, challenges to US prosperity and security come from adversary states using influence operations, predatory economics, coercion, subversion, and proxy networks to extract benefits without escalating to conflict. Revisionist powers and rogue regimes pursue these unconventional activities because they exploit inherent ambiguity in the gray space between peace and war—an ambiguity that traditionally challenges Washington’s decision-making and organizational structures.

Call it what you will—unrestricted warfare, the three warfares, asymmetric warfare, a “Gerasimov Doctrine,” or otherwise. This is how adversaries of the United States have chosen to compete.

They leverage indirect strategies, in part, because the US military’s conventional deterrence denies these adversaries’ pursuit of their aims through more overt and hostile forms of aggression. It has become clear that conventional deterrence is not sufficient to dissuade determined challengers from pursuing deliberate efforts to control conditions, influence perceptions, and attempt to erode US strengths. Effects of these activities are clearly visible in peacetime and wartime alike, and add urgency for the United States to develop an understanding and framework to compete in this space.

This is the void that the National Defense Strategy’s IW Annex attempts to fill. Recognizing how state adversaries use nontraditional approaches to compete short of armed conflict, the IW Annex directs DoD to apply its robust IW expertise to proactively shape conditions to the United States’ advantage. Far from using IW reactively or as a means to kinetically pursue nonstate actors, the IW Annex acknowledges that competition is a struggle over the human dimension, and a people-centric approach will position conventional and special operations forces (SOF) to successfully compete for the influence, credibility, and legitimacy necessary to maintain US advantages in competition and conflict.

Resetting the Record on Irregular Warfare

Post-9/11 counterterrorism and counterinsurgency operations have led to a misunderstanding of what IW actually is, which can distort perceptions when contemplating its role in competition. The US approach to counterterrorism has been highly reliant on direct action aligned with counterinsurgency operations, and has been disproportionately performed by SOF. Consequently, some policymakers could be susceptible to a comfort level of continuing the status quo, where IW—and therefore, SOF—becomes confined to made-for-Hollywood missions.

This could spur faulty logic that IW consists of only these kinetic activities against nonstate actors, or that SOF only conducts militarized operations. If this conflation persists, policymakers risk overlooking or underutilizing essential IW capabilities that can provide outsized benefits and expand the competitive space. Or worse, continued interest in addressing “conventional warfare” as part of competition may tempt decision makers to discard IW entirely in favor of solely emphasizing the high-end fight. Make no mistake, DoD’s contributions to competition involving IW can, and should, involve more than a potential high-end war alone.

To that end, the IW Annex challenges DoD to take stock of its IW capabilities and adapt them for competition. Several of these, including military information support operations, civil affairs, public affairs, foreign internal defense, and counter–threat network capabilities, among others, have been underutilized. If immediately corrected and properly prioritized, these capabilities could be force multipliers in competition and provide substantial benefits relative to their lower cost. Taken together, these capabilities constitute the joint force’s means with which to understand and shape the operational environment, synchronize with interagency partners, and integrate with national campaigns to deter malign activity and expand US influence in politically sensitive environments.

Great power competition is often billed as a whole-of-nation struggle. Hard lessons learned during the United States’ counterterrorism and counterinsurgency experiences underscore the importance of interagency coordination before, during, and after conflict if tactical actions are to be consolidated into lasting strategic gains.

Unlike counterterrorism and counterinsurgency, where DoD was predominately the lead for executing those missions and interagency partners engaged in stabilization and peace talks during or after military operations already commenced, a DoD-led approach to strategic competition is insufficient. The acutely political nature of strategic competition requires DoD to take a supporting role—and leverage its IW capabilities to advance nonmilitary objectives. Military power is unlikely to be the decisive element in competition.

Recognizing this, the IW Annex challenges the Defense Department to collaborate with interagency partners, enable interagency actions, and fill any gaps with DoD capabilities. In doing so, it acknowledges the department’s ability to compete short of armed conflict, scope its IW activities to align with broader strategic and political end states, and use its capabilities to enable whole-of-government campaigning.

As an example, the US military has honed its “find, fix, finish” approach for direct action, using all means at its disposal to develop an exquisite understanding of an adversary and the operating environment. “Attack the Network” and other methodologies developed in response to counterterrorism and counterinsurgency requirements remain just as relevant as IW is adapted for competition.

While IW in competition still emphasizes identifying and understanding malign networks, the “finish” will differ. Instead of direct action, DoD’s efforts to illuminate networks could enable a panoply of interagency “finish” options, including diplomatic or financial sanctions, public diplomacy, information operations, or other effects that incorporate all elements of US national power and are applied deliberately to bring about a desired political outcome.

Suppose that “Attack the Network” or other approaches were applied against proxy forces affiliated with the Iranian Revolutionary Guard Corps or private military contractors aligned with the Kremlin. Tenets of IW are tailor-made for these problem sets, and others associated with strategic competition. A concerted IW campaign could highlight destabilizing behaviors and provide the grist needed for “finish” options by interagency and foreign partners to take legal, diplomatic, or financial measures as part of the continuous contest for influence and legitimacy. Applied to the requirements of strategic competition, this approach could impose costs on US adversaries’ destabilizing activities, create dilemmas on their strategic planning, and provide openings for political solutions to keep conditions in the United States’ favor.

These applications of IW demonstrate its impact on contesting adversarial aggression, but the IW Annex goes a step further, directing DoD to “dictate the character, scope, intensity, and terms of competition” against its adversaries with “proactive, dynamic, and unorthodox” approaches. Implicit in this direction is the realization that preparing only for high-intensity conflict is insufficient to preserve influence, legitimacy, and credibility against adversaries who are not waiting for an outbreak of hostilities in order to compete. In effect, the IW Annex provides a vital framework for understanding irregular competition that is endemic to the modern landscape.

Critics of this approach may claim that DoD should remain exclusively focused on maintaining deterrence and preparing to win the next war. While these are vital and should not be abandoned, focusing solely on high-end scenarios assumes that the United States can predict the nature of the next conflict, and does not acknowledge the costs of inaction as adversaries increasingly challenge geopolitical conditions while inching toward fait accompli scenarios that undercut US interests.

Take Taiwan or the South China Sea, for instance. China remains unambiguous in its intent to reunify Taiwan—by force, if necessary—and prevent the US military from rallying to the island’s aid. Meanwhile, Beijing is targeting Taipei’s diplomatic allies to eliminate its international legitimacy. These efforts put Washington in a difficult position: either envision a catastrophic conventional fight with no guarantee of victory, or find that an adversary secures a critical objective without firing a shot.

In a similar way, Beijing’s aggression in the South China Sea attempts to undermine other South China Sea claimants’ sovereignty while reclaiming land and militarizing the region to deny non-Chinese presence. These actions are in clear violation of international law and challenge US influence in the region. The State Department has condemned China’s attempt at a “maritime empire” and expressed solidarity with its Southeast Asian allies, but the worrisome trend continues.

Make no mistake—in these scenarios IW is not the silver bullet that preserves Taiwanese resilience or maintains a free and open Indo-Pacific region. In either case, however, the US military can be most effective by using its tools proactively to put adversaries on the defensive, demonstrate opposition and costs to their malign activities, create obstacles to their further gains, and shape conditions to enable political resolution. Rather than watching the tide turn against the United States and its allies, the deliberate and coordinated use of IW capabilities would buy invaluable time and space for political solutions, or provide access and placement in the event of conflict that may not otherwise be available.

The National Defense Strategy’s IW Annex is transformative not only for its introspection on the past nineteen years of counterterrorism, but also in realizing that the requirements of great power competition exceed what the Pentagon can shape on its own through superior technology and firepower. By harnessing the skills acquired from DoD’s counterterrorism and counterinsurgency experiences, emphasizing the department’s capabilities in the civil and information environments, and applying these skills in support of national priorities, the United States can learn from past experiences and be proactive in applying its IW toolkit to strategic competition.

Kevin Bilms is a career Department of Defense civilian serving as the Irregular Warfare Team Chief in the Office of the Under Secretary of Defense for Policy. Prior to this assignment, he served as the senior policy advisor for counterterrorism and transnational threats at the National Security Council.