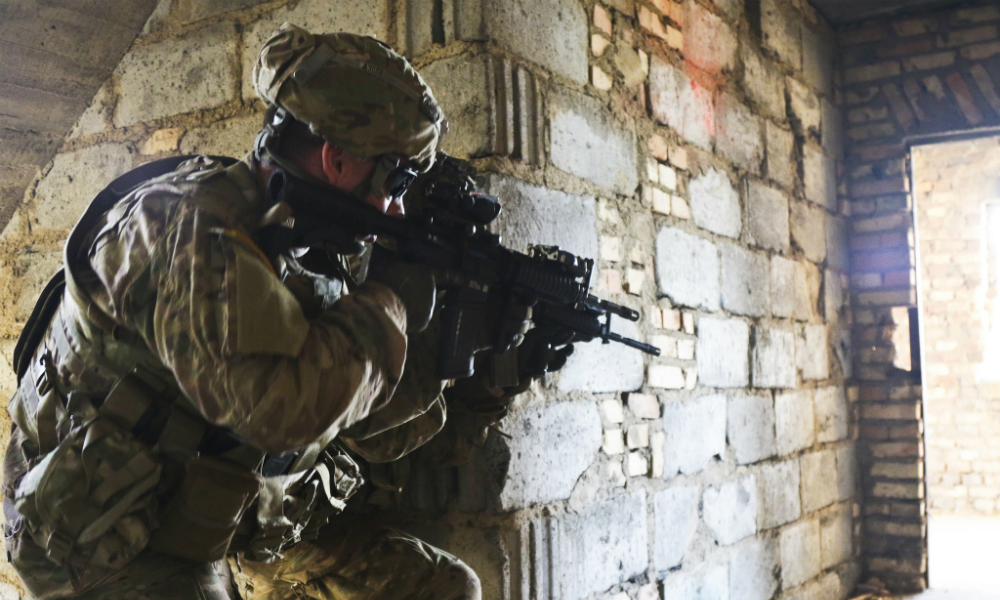 A platoon is on patrol in a far-off land. Each of the platoon’s three squads is operating several miles apart from the others. But despite this physical separation, the platoon’s soldiers feel the connection to those around them—indeed, they are connected. Each soldier has a radio that creates a link to every other soldier in the unit. They all wear body cameras so leaders see what they see. They move lightly and quickly through rough terrain, their packs and heavy equipment hauled not far behind by a load-bearing unmanned vehicle. In the air above each team has a small unmanned aerial system (UAS, or drone) using human detection sensors to search ahead of the platoon’s movements.

The enemy has established an L-shaped ambush along their path, but the platoon is prepared for it. The soldiers have never been surprised by their enemy’s actions. A UAS spots the ambush. A squad leader calls in a fire mission and uses the UAS’s laser designator to identify the target for the precision munitions dropped by a fighter aircraft high above. The bomb destroys the ambush and the patrol moves on, the threat neutralized without a platoon member firing a shot.

Is this scenario science fiction? Not according to retired Maj. Gen. Bob Scales. In his new book, Scales on War, he argues that we have the technology today to make this scenario a reality. Scales, ironically a field artilleryman by trade, has been one of the most outspoken advocates for leveraging technology to ensure American infantrymen never need to engage with an enemy on even terms—essentially, that they are never in a fair fight.

He begins his argument like any good military leader should, by describing the enemy. He traces the success of today’s enemies all the way back to the wisdom of a Japanese colonel who survived the battle of Okinawa. Col. Hiromichi Yahara was charged with returning to the Japanese homeland and preparing its defenses. He and other Japanese veterans of Okinawa learned that the only way to defeat American forces was to kill enough of them, to kill them “with such efficiency that they would reconsider the wisdom of invading Japan.”

Scales points out that since World War II this blueprint for victory over America has been used over and over again with great success. An enemy that is willing to “translate sacrifice into a national strategic advantage” can defeat America by leveraging its vulnerabilities. These vulnerabilities are American public opinion and, as Yahara noted in comparison to Japanese soldiers that considered it an honor to be killed in combat, “the reluctance of American soldiers to die.” Such a comparison could also be made today against the suicide bombers of the Islamic State.

In essence, the longer America can be kept in the fight, the better chance an adversary has of winning. The way to do that is simply by not fighting the way US forces want to fight. America’s adversaries have learned that if they try to go toe to toe, like Iraqi forces did during Operation Desert Storm and again in response to the initial invasion of Iraq in 2003, they will be defeated quickly. By hiding and drawing the fight out with small engagements, however—like US forces experienced in Vietnam, Somalia, and Afghanistan—it is possible to weaken America’s will to fight and ultimately win the long war.

How do we counter Col. Yahara’s concept? Scales sees technology as the answer to this question. He argues that the focus for technological research needs to shift from an overwhelming emphasis on big-ticket platforms like fighter aircraft and naval vessels to improving the conditions and equipment of those that shoulder the most risk on the battlefield—infantryman on the ground.

The problem, however, is twofold. First, the development of new infantry equipment is not sexy. Jets and ships serve as clear symbols of American might, which is why their development always seems to take precedent over ground combat tools. A new body camera or squad tactical radio has no such impact. And second, items like planes and ships require a lot of manpower to build, which makes it an issue of job creation for lawmakers.

Scales’ emphasis throughout much of the book is at the tactical level. But at one point, he does break away from his focus on small units in order to discuss what he calls “strategic genius,” of which he outlines four aspects:

Scales goes on to argue that we must do more to identify officers with these traits and groom them for strategic leadership roles. The problem, however, is that the promotion system is not designed to do this. Leaders are generally promoted for their demonstrated skill—primarily tactical—on the battlefield, without sufficient consideration given to their ability to think strategically. But as Scales points out, “experience has shown that great tactical skill does not equal great strategic skill.”

His solution to the problem is to identify these potential future strategic leaders early. He argues that the Army should promote more people to major more quickly, in order to increase the odds of finding future strategists. Additionally, promotion boards need be able to measure an officer’s intellect, potentially taking into consideration academic records and comments by commanders on officers’ potential for strategic leadership.

The book concludes on a sour note. Scales believes the Army will break soon if something isn’t done, and it will be broken long before people realize it. The first warning signs will be NCOs choosing not to re-enlist, the brightest officers moving to the civilian world early, and recruiters having a hard time meeting quotas. It will take a dramatic mission failure like Desert One or Task Force Smith for people to see that a problem exists.

Scales’ warnings should be taken as a clarion call. If his assertions that ground forces will be decisive in the wars of tomorrow and that the Army is losing some of its most promising strategic thinkers—and he provides compelling evidence to support both—then more must be done, and quickly. His book should be read by anyone who wants to understand the current nature of war, where we stand as an Army now, and how we work towards becoming a more effective fighting force. But most importantly, it should be read by those in a position to effect the organizational changes he describes.

Major James King is currently serving as a Brigade Senior Intelligence Officer (S2) for a Stryker Brigade Combat Team in Alaska.  While serving over 20 years in the National Guard, Army Reserve, and Active Army, MAJ King has held multiple leadership positions in the Military Police, Infantry and Intelligence fields as well as deploying three times in support of Operation Iraqi Freedom.  Major King holds a BA in Sociology from the University of Washington where he earned his commission through the ROTC program and a Master’s Degree in Strategic Intelligence from American Military University. The opinions here are the author’s own and do not reflect the policy of the U.S. Army, Department of Defense, or any government agency.