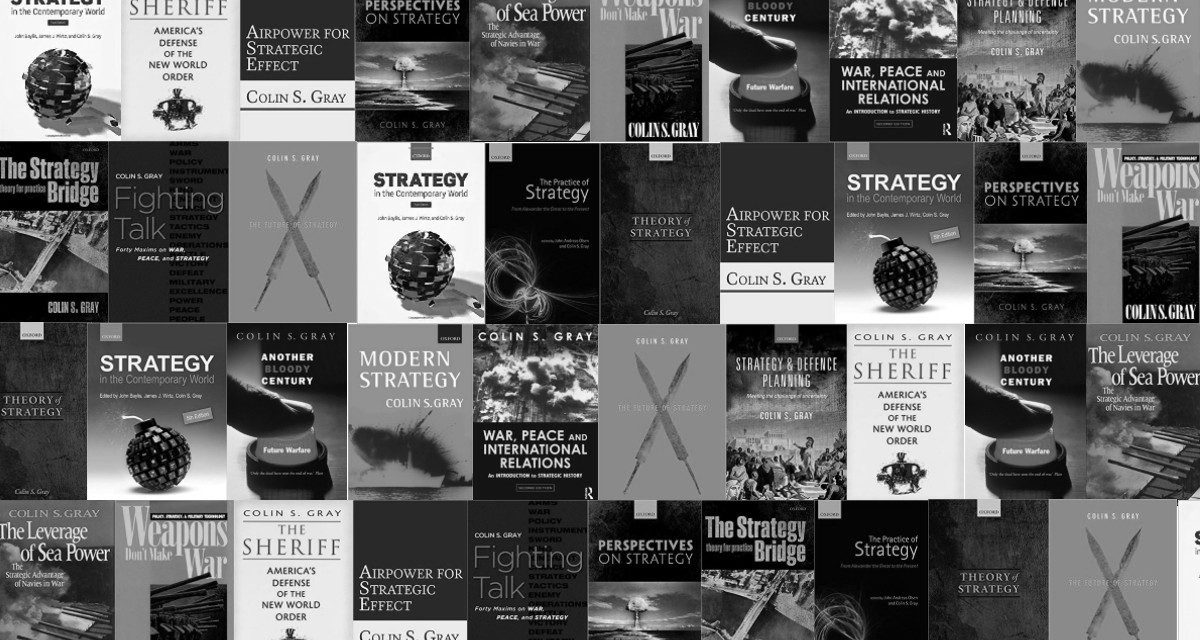 Colin Gray—who shaped strategic studies as much as anyone—died last week. And as difficult as it is to know he’s gone, he left us with a body of work that will live on in the minds of strategic practitioners for generations to come.

I knew him well late in his life. In 2013 I had just finished a two-year master’s program at Victoria University in Wellington, New Zealand, and desperately wanted to continue work toward a PhD. American graduate schools wouldn’t accept my time in New Zealand as a stepping stone to the doctorate, so I cold-emailed Colin at the University of Reading in the UK. Surprisingly, he responded quickly that he liked my proposed topic, and so began five years of study under him (as well as Professor Beatrice Heuser, now at the University of Glasgow). Along the way, Colin retired from Reading, but continued as my advisor in his “Professor Emeritus” status. It’s possible I was his final PhD student.

Colin was as much a writer as he was a thinker. That’s what drew me to him in the first place, and I suspect it’s the same for others. Arguably, nobody’s been so prolific a writer in strategic studies. His contributions are everywhere, and because much of it predates our digital age, much keeps popping up.

Some of his many fans may not know about a couple collections of his in the United States. For many years he wrote an annual manuscript for the Strategic Studies Institute at the US Army War College. And, as of last year, the Modern War Institute at West Point houses his personal library. An email Colin wrote to me on the matter said he hoped his “written comments in the books add spice” to our debates and discussions. (While I brokered the transfer, then-MWI deputy director Rick Montcalm and the rest of the staff deserves all the credit for safeguarding this precious set.)

In person, Colin was relatively short in a way you wouldn’t expect from seeing so many back-of-book author photos. When I knew him, he bore an uncanny resemblance to the English actor Sir Ian Holm (that is, when Sir Ian wasn’t wearing a “Bilbo Baggins” costume). His office and home were filled from floor to ceiling with books—books on top of books, books propping up books, books stuffed under tables, and littler books stacked atop bigger books.

He loved ideas. He loved discussion and argument. He loved sharing his ideas, and had an endless capacity for gathering others and passing on what he knew in waterfalls of wise words.

Colin wrote everything by hand, with a simple, elegant, black Mont Blanc pen. Ballpoint, blue ink. When he completed a draft (which, on occasion, could be difficult to decipher!), he then engaged a typist to convert the handwritten version to manuscript.

He delighted in hearing I was a fellow pen geek, and on the occasion of my dissertation completion he sent me a pen—a beautiful Mont Blanc.

While I’ll miss Colin as a person, he does leave us well-stocked with his books, thoughts, and ideas. What follows are just a few that impacted me the most and why they were so impactful. They just scratch the surface and so I encourage others to explore more.

The Strategy Bridge: Theory for Practice

My copy of this book has almost as many post-it notes as pages. It seems like every paragraph pops with some new insight that requires reader notation for future reference. In particular, when I read Colin describe the lack of “careful and deep [study] of the role of the [supreme] commander” as a “prominent” weakness in “modern Western strategic theory,” I took that on as my dissertation subject. Moreover, when Eliot Cohen calls something the “first original and serious work on strategy” of the century, you should check it out.

Colin listened to his students, even the greenest greenhorns. While he finished edits on this book, we had a back-and-forth in which I shared with him an essay written by H.R. McMaster from the New York Times. He liked it so much he included it as his opening epigraph. For a student, this was richly rewarding and felt like an actual (if miniscule) contribution toward scholarship-in-progress.

Strategy in the Contemporary World

Colin co-edited (with John Baylis and James J. Wirtz) the finest comprehensive primer on strategic studies series out there, and I’ve benefitted from and enjoyed each of the six editions out in publication.

This was my first, and you never forget your first. Because it predates my post-it policy for book preservation, it’s full of marginalia and magnificently ugly green fluorescent markings. I can still flip through it and bump into so many good ideas: the many different dimensions of strategy; an compelling argument that strategy, operations, and tactics aren’t really hierarchical and “not wholly distinctive”; and an explanation of why culture and the human dimension of strategy are often overlooked.

This slim volume of maxims is Colin’s most efficient ideas-per-page performance. This is where he most directly stated that there “are no new ideas in strategy.” Most writers simply “update the classics for a better fit with contemporary realities.” That said, this one was good enough to land on former Secretary of Defense James Mattis’s professional reading list.

The Future of Strategy

Another short book of Colin’s that made Mattis’s list. He began it by writing, “I am a strategist. For fifty years I have spoken, written and sought to advise [others] about strategy.”

He penned those words in 2015, so we can update that figure to fifty-five years (and counting). While the future of strategy may be murky, one thing is certain—it will forever include the words and works of Colin Gray. And we’re all the better for it.

Lt. Col. ML Cavanaugh, PhD, is a senior fellow with the Modern War Institute at West Point, a professor of practice at Arizona State University, and an associate fellow with the Royal United Services Institute (UK). He co-edited, with author Max Brooks, Winning Westeros: How Game of Thrones Explains Modern Military Conflict, from Potomac Books.