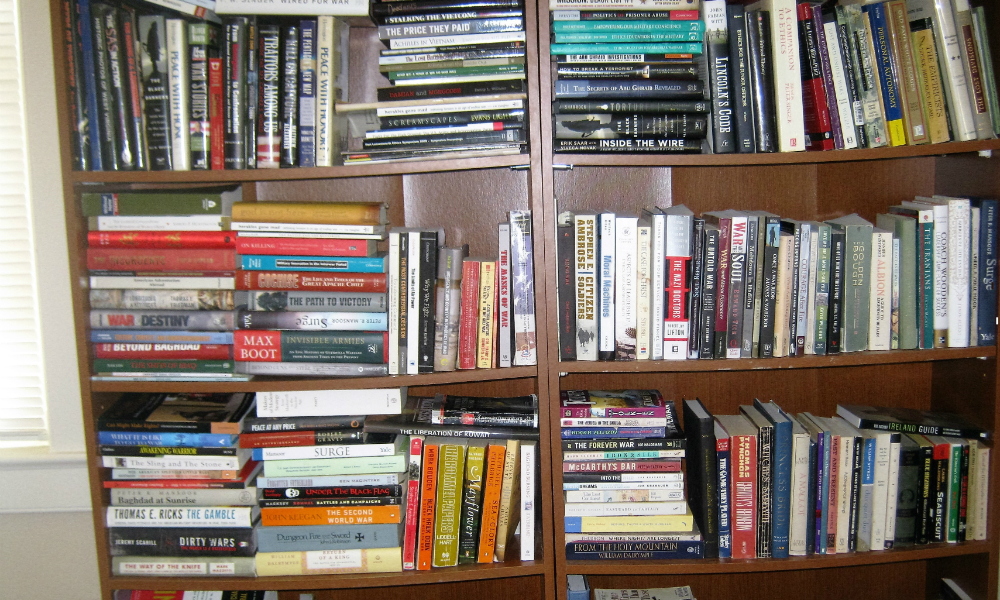 This list is focused on by far the most important dimensions of armed conflict, the psychological and the moral. As US doctrine asserts, war is a “battle of wills.” The philosopher Peter Fromm, the strategist Kevin Cutright, and I like to rephrase this idea as “war is a moral contest,” or, “the side that eventually loses a conflict is the side that loses the belief that it is right to continue the fight”—clearly, a psychological and moral matter. But the importance of these dimensions run even broader and deeper than “who ultimately wins,” as any society seeking to reintegrate its returning combat veterans well knows.

1. J. Glenn Gray, The Warriors: Reflections on Men in Battle

Newly awarded a doctorate in philosophy, Gray deployed as an interrogator to the European theatre of World War II. A decade later, he produced this masterpiece, a brilliant, remarkably eloquent meditation on human nature and modern war. As quotable, timeless, and beautifully rendered as Hamlet, it thoughtfully presents and considers critical questions for the professional soldier, such as: What role does honor play in war? Why does distance make it easier to kill? What is the place—if any—of hatred, dehumanization, and compassion among soldiers in combat? Fifty years after first publication, this book remains a profoundly important starting point for those keen to deepen their understanding of war’s human dimension.

2. Karl Marlantes, What It Is Like to Go to War

This book is the closest there is to a 21st-century equivalent of Gray’s Reflections. The author describes the decades-long spiritual journey on which his intense combat experiences propelled him. During this journey, he meets some of the world’s great thinkers and explores various cultures, religions, and philosophies. While Marlantes doesn’t use the phrase “moral injury,” it is what he often means when he says “PTSD.” He teaches us that it’s not the adrenalin rush of fear-inducing events that poses the greatest psychological risk to society and veterans. The greater risk is combat’s moral context.

3. Timothy Challans, Awakening Warrior: Revolution in the Ethics of Warfare

The fact that this book even exists is remarkable. Only Andrew Bacevich may come close to possessing Challans’ ability for recognizing, deconstructing, and transforming our military’s current cultural assumptions into a coherent philosophy that could enable our military to interact much more successfully with the world—and perhaps even choose and “win” the right wars. Because this book tipped sacred cows, it caused consternation among some senior officers. True, it is hard for even the most sympathetic of readers to agree with everything this supremely iconoclastic thinker writes. However, there is no book that I own that is more dog-eared and annotated than this one.

This Pulitzer Prize-winning history describes how the Continental Army was routed from New York City, retreated to Pennsylvania, and won crucial victories at Trenton and Princeton. Key to Fisher’s narrative is his portrayal of how our national identity was formed—an identity that has given our nation and military great moral strength ever since. At the war’s most perilous juncture, with the very existence of our nation on the line and American colonists outraged by the British practice of “showing no quarter” to surrendering Continental soldiers, you would expect the Continental Army to reciprocate. This isn’t what happened, though. Despite what “they” were doing to “us,” General Washington insisted that his soldiers hold themselves to a higher standard. Washington’s example is a critically important one to remember, in an age when some leaders talk about throwing away two-and-a-half centuries of American military tradition and resurrecting a much older pagan idol—one that says it is acceptable to treat some prisoners (“terrorists”) in ways that outrage us when American prisoners are treated that way.

5. Jonathan Shay, Achilles in Vietnam: Combat Trauma and the Undoing of Character

This book begs to be read with Shay’s companion volume, Odysseus in America: Combat Trauma and the Trials of Homecoming. The author is a psychologist who, while working for the Department of Veterans Affairs, treated hundreds of Vietnam War veterans. These two books put “moral injury” on the map, popularizing the term. By linking characters and passages from Homer with scores of anecdotes involving Vietnam veterans, Shay brilliantly illuminates many of war’s eternal, human qualities. Mainly, he teaches us that “ethics is preventive psychiatry.”

Meagher is one of our country’s leading classical scholars. Like Shay, Meagher draws strong connections between antiquity and today. This book contains Meagher’s definitive translation of Euripides’ play about Herakles’ return from combat and the hero’s going temporarily insane, killing his wife and children. It also contains a terrific interpretive essay that brings home the play’s relevance to the modern reader. This book, too, begs to be read with a companion volume, Meagher’s more recent volume, Killing from the Inside Out: Moral Injury and Just War.

Operation Phoenix was a controversial program. If all Army officers had implemented it the way that Herrington did, it would have been universally lauded instead. It is first and foremost a counterinsurgency classic, deservedly cited as recommended reading in our Army’s COIN manual. What I appreciate most about this book, though, is how it depicts then-Captain Herrington convincing a senior South Vietnamese official to use rapport-based approaches rather than torture. The result was not only far more reliable intelligence but often the “turning” of enemy soldiers so that they collected against their former comrades.

8. Thomas X. Hammes, The Sling and the Stone: On War in the 21st Century

This book is the most readable and compelling of the books written by Fourth Generation Warfare (4GW) theorists. Hammes employs contemporary anecdotes to convincingly argue that the most important military trend today is neither robots nor insular network-centric operations but supercharged, globally connected information operations. Thanks to information technology, violent groups can exert influence on an enemy nation’s center of gravity—its population and this population’s government—far more easily and more effectively than they could in the past.

9. Arnold R. Isaacs, Vietnam Shadows: The War, Its Ghosts, and Its Legacy

A little known book that should be better known, Vietnam Shadows insightfully and fairly examines the impact of the Vietnam War on the American psyche. Adam Garfinkle of the New York Times writes: “Isaacs deploys telling tangents, revealing juxtapositions, and shrewd asides to deepen our understanding of the impact of the war. . . . His judgments are sound, and his exquisite nose for detecting self-deception leads him to some awkward truths about the wartime mythologies that have become encased in middle-aged amber.”

10. Joshua E.S. Phillips, None of Us Were like This Before: American Soldiers and Torture

The literature supporting Shay’s dictum that “ethics is preventive psychiatry” is vast. Two memoirs that jump to mind are Michael Orban’s Souled Out: A Memoir of War and Inner Peace and Bill Edmonds’ God Is Not Here: A Soldier’s Struggle with Torture, Trauma, and the Moral Injuries of War. Phillips’ well-researched and deeply tragic book may be the most important in this genre. Phillips tells the story of soldiers at a small jail in Iraq who tortured their detainees for fun and how guilt over their deeds later tortured them. When they returned home, many of those soldiers struggled with drugs and alcohol, insomnia, high blood pressure, depression, and keeping jobs. Two of them eventually died under circumstances their friends and families believe was suicide.

11. (BONUS) Peter Mansoor, Surge: My Journey with General David Petraeus and the Remaking of the Iraq War

As Petraeus’ executive officer during the 2007 “surge” in Iraq, then-Colonel Mansoor had firsthand access into the US military’s most effective post-9/11 military campaign. Surge more than simply reports; Mansoor’s perspective reflects a fair, deeply informed, and practical understanding of both the value and limits of counterinsurgency theory. He presents the success of the surge as due to an almost miraculous alignment of the stars—the right approach at the right time. He points out, for example, that the Sunnis had to be brutalized for years by al-Qaeda in Iraq and Shi’a death squads before they could stop fighting and start working with US forces, the one ally who might prevent their becoming a persecuted minority in the new Iraq. It’s a must-read for any serious student of counterinsurgency and our nation’s recent wars. Lt. Col. Douglas A. Pryer is an active-duty Army officer, an MWI Non-Resident Fellow, and the author of the book The Fight for the High Ground: The U.S. Army and Interrogation during Operation Iraqi Freedom, May 2003 – April 2004.
Share on Facebook Share
Share on TwitterTweet
Share on LinkedIn Share
Send email Mail
Print Print