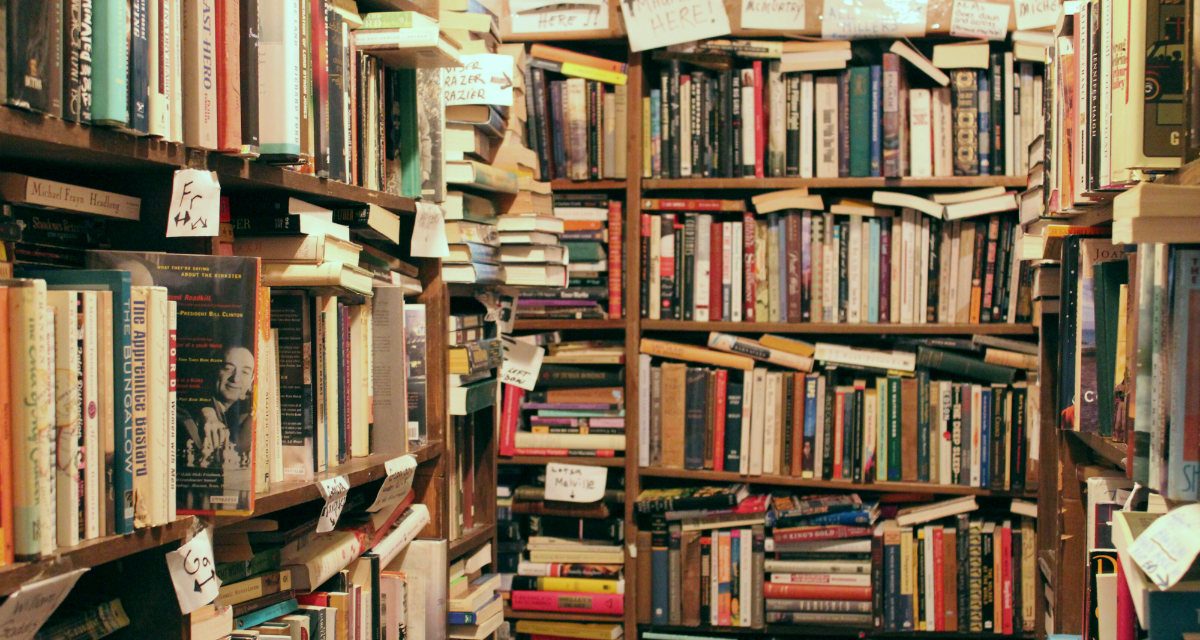 I used to be a book snob. Not the kind who ostentatiously leaves a copy of War and Peace sitting on my desk or judges you for reading John Grisham—I was a “new book” snob. Every book I owned had been purchased brand new. I didn’t like my books to have cracked spines, torn covers, or someone else’s handwriting in the margins. And most of all, I didn’t like that used books felt and even smelled, well, used. I worked part-time during college at my university’s main library, and my first order of business after a shift of re-shelving books was to wash my hands.

Then one day during a deployment to Iraq, I had to get from my FOB in east Baghdad to the sprawling Victory Base Complex on the other side of the city. I got myself a seat on one of the Black Hawks flying a never-ending circuit of bases in and around Baghdad, and strapped in for what probably should have taken about an hour. All went according to plan, until the few of us onboard were told to get off the aircraft at Camp Taji, just north of the city. I’ve been told that some fixed-wing aircraft had been pulled from whatever they were normally doing to ferry Georgian troops home to fight in the war with Russia that was looking inevitable—meaning Chinooks were covering down on some C-130 missions, and Black Hawks filling in for the Chinooks. Whether or not that was the cause I’ll likely never know, but regardless, I found myself stranded indefinitely at Camp Taji’s helicopter landing zone. I walked into the flight ops room, where I was told it was best to stick around there, because if another helicopter with space came in, there wouldn’t be much notice.

With shifting requirements for limited air assets, and frequent dust storms grounding helicopters, this was not an uncommon situation, and there was a stack of books in the corner for anyone who suddenly needed to kill some time. I picked one up and found a comfortable place to sit down outside. The book I had grabbed was called Playing for Pizza, by John Grisham (see, I told you I wasn’t that kind of book snob). It had a badly cracked spine, a torn cover, and somebody else’s name scribbled inside. I will go to my grave insisting that Playing for Pizza is one of the greatest books I’ve ever read. It seems others disagree—I’m pretty sure it’s Grisham’s lowest-rated book on Goodreads—but it was everything I needed in a book on that day in that place. It was a beat-up paperback, and it felt and smelled like a used book, and none of that diminished my enjoyment.

I’m glad I had to amuse myself with a used book that day. It wasn’t exactly a life-changing moment, but I certainly point to it as the time when I stopped turning my nose up at a book just because somebody else owned it before, ripped a page or two, and maybe even spilled coffee on it. It opened me up to one of life’s great joys: hunting for treasures in a used bookstore. And there are treasures to be found, especially for those looking to expand the boundaries of their professional reading—whether you’re a military member, a national security wonk, or a history buff.

Below is a list of some of the best used books that now sit on my shelves.

This book is an absolute thriller, and you’ll have to remind yourself repeatedly that it’s not a work of fiction. As a junior diplomat posted to Moscow in the 1930s, Fitzroy MacLean undertook a number of journeys across the Soviet Union, to Central Asia and even Afghanistan—often shaking secret police along the way. When World War II broke out, he enlisted as a private (and ultimately rose to the rank of brigadier), and had a remarkable wartime career with the SAS in North Africa and later embedded with Tito’s partisans in Yugoslavia. He tells the stories of all of these exploits in Eastern Approaches.

Bonus: Vladimir Peniakoff, Popski’s Army. In a similar vein to Eastern Approaches, this autobiographical account of Vladimir Peniakoff’s remarkably unconventional military experience in North Africa and later in Italy is both a page-turner and a study in irregular warfare.

William Manchester, The Arms of Krupp

The military-industrial complex is nothing new, and Americans don’t have a monopoly on it. For nearly four centuries, the Krupp family business served as the armorer to German leaders. Beginning with the Thirty Years’ War and extending until well after World War II, the Ruhr-based dynasty played an integral role in the military history of not just a country, but a continent.

Spy novels are my guilty pleasure, and for the past few years I’ve been searching out older and older volumes in the genre. This is my favorite. Written in the early nineteenth century, the book weaves a tale of Revolutionary War intrigue in the neutral ground of the Hudson River Valley between American and British forces. Where old novels often lose casual readers with what feels like archaic language, this book never does. It remains engaging from cover to cover. When you’re bored with Le Carre, have had your fill of Graham Greene, and perhaps even looked far enough back to discover and enjoy W. Somerset Maugham, I encourage you to go a little further and try this one on.

Britain’s World War II record of discovering (and detaining) intelligence agents sent by Germany is nothing short of remarkable. The decision to keep secret many of those apprehensions and use those agents to transmit information back to Germany for the purposes of deception was an inspired one. The entire operation was overseen by the “Twenty Committee” (XX, in Roman numerals—”double cross”), which was led by J.C. Masterman. His account of the inner workings of that committee and the decisions they made—all while the very survival of the country was at stake—is fascinating.

Bonus: Ewen Montagu, The Man Who Never Was. Speaking of British deception, Operation Mincemeat is one of the all-time classics. Ewen Montagu was the man who had the idea of dressing a corpse in a British uniform and dumping it in the sea where it would wash up and be reported to German authorities—and planting on the body military documents suggesting a planned invasion of Greece intended to divert defensive attention from Sicily, the real target.

Philip Caputo, A Rumor of War

Philip Caputo’s memoir about his experience as a lieutenant in Vietnam is difficult to define. It isn’t about the politics of the war, it doesn’t overtly address the war’s strategy, and it doesn’t engage in questioning about why he and his soldiers were there. And yet it compels readers to grapple with all of those topics on their own. At its core, though, it is about the experience of war—the daily realities, the fear, and bonds that form between those with this shared experience.

Bonus: Philip Caputo, Horn of Africa. I actually read this novel by Caputo, less famous than his Vietnam memoir, first. Not long after I had spent some time in East Africa doing field research, and had begun to develop a deep affinity for the region and its history, I had this book recommended to me and I soon found it at my favorite used bookstore in DC, Capitol Hill Books. Its account of a secret military operation is entirely a work of fiction, but its reflection of Cold War-era great-power involvement in places like the Horn of Africa, of vast tracts of ungoverned territory, and of conflicts that mutate but never end—these are very real.