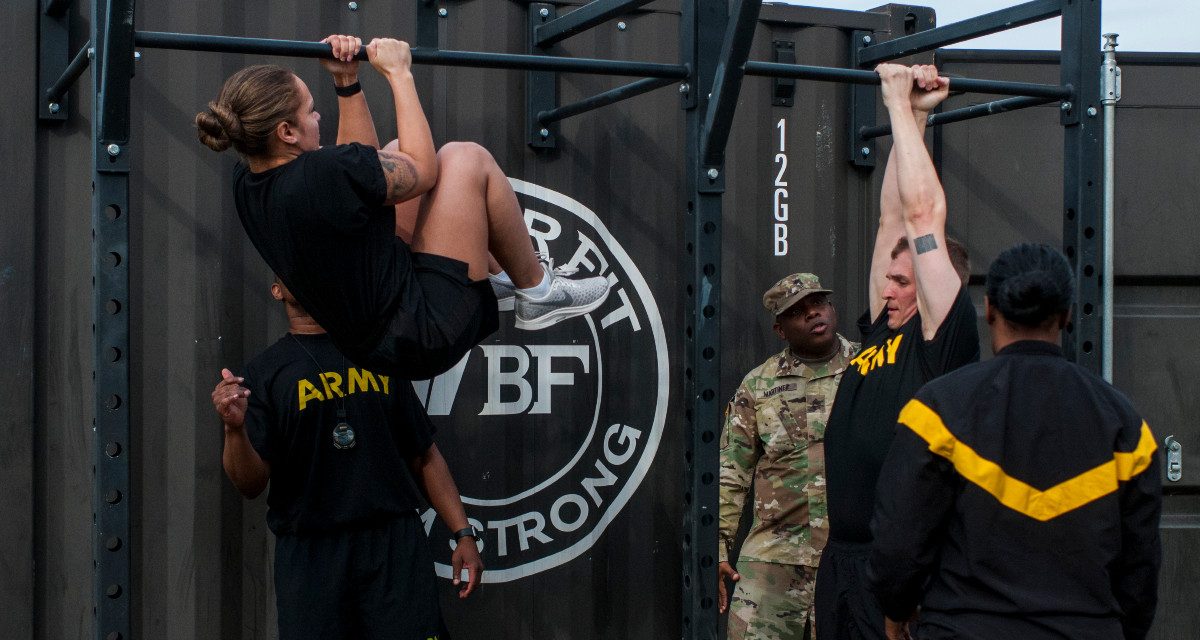 As the Army’s first female infantry officer, I have long awaited the elimination of a gender-based fitness test. The drastically lower female standards of the old Army Physical Fitness Test (APFT) not only jeopardized mission readiness in combat units but also reinforced the false notion that women are categorically incapable of performing the same job as men. The new Army Combat Fitness Test (ACFT) promised to alleviate these issues by finally assessing women on the same fitness scale as men and setting minimum physical standards based on branch requirements rather than gender.

However, these gender-neutral standards have recently garnered criticism. Due to an initial ACFT fail rate of 54 percent among women, activist groups have raised concerns that the test will disadvantage female servicemembers. As such, lawmakers directed the Army to halt implementation of the ACFT until the service can prove it will not negatively impact the recruitment and retention of soldiers in critical support jobs, particularly those with large female populations. To address this concern, the Army is considering reverting to gender-based fitness scoring for promotion and reducing the minimum standards for combat arms. Based on my experience, I feel compelled to share how this potential reversal in policy will negatively impact both combat arms branches and the women who serve in them.

First, reverting to gender-based scoring could drastically reduce the performance and effectiveness of combat arms units. Specifically, without a separate, minimum standard for combat arms, the requirements to join the nation’s combat forces could soon be as low as performing ten push-ups in two minutes, running two miles in twenty-one minutes, deadlifting 140 pounds three times, and performing only one repetition of a leg tuck or, failing that, two minutes of a plank exercise. Proponents of this ACFT standard will undoubtedly claim that it is an appropriate predictor of success for combat arms soldiers; as a recent infantry company commander, I can promise you it is not. While these low standards may have seemed adequate in a controlled study, I know from experience that they will not suffice in reality.

Indeed, the presence of just a handful of individuals who cannot run two miles faster than twenty-one minutes has the potential to derail a training exercise, not to mention an actual combat patrol. Entire companies of 130 soldiers will be forced to frequently halt operations in order to medically evacuate the ill-prepared as they succumb to fatigue and injury. Missions will be delayed and other soldiers will be overburdened with the weight of their unfit teammates’ equipment. This scenario is inconvenient and bad for morale during a training exercise; in combat it could be deadly. Instead of addressing the issue of having some soldiers insufficiently prepared for the physical rigors of combat, which sparked the APFT’s revision in the first place, a gender-based ACFT in combat arms will normalize it and make it unmanageable. It is wholly unethical to allow the standards of the nation’s premiere fighting units to degrade so badly, just to accommodate the lowest-performing soldiers.

Reverting to gender-based scoring and reducing the minimum standard for combat arms will also hurt the women in those branches. Under a gender-based system, women in combat arms have to fight every day to dispel the notion that their presence inherently weakens these previously all-male units. Lower female standards also reinforce the belief that women cannot perform the same job as men, therefore making it difficult for women to earn the trust and confidence of their teammates. The original ACFT promised some respite from these perceptions, but a reversion to gender-based scoring threatens to validate them. While it may be difficult for a 120-pound woman to lift or drag 250 pounds, the Army cannot artificially absolve women of that responsibility; it may still exist on the battlefield. The entire purpose of creating a gender-neutral test was to acknowledge the reality that each job has objective physical standards to which all soldiers should be held, regardless of gender. The intent was not to ensure that women and men will have an equal likelihood of meeting those standards. Rather, it is incumbent upon women who volunteer for the combat arms profession to ensure they are fully capable and qualified for it. To not require women to meet equal standards in combat arms will not only undermine their credibility, but also place those women, their teammates, and the mission at risk.

Critics might suggest this opinion makes me uncaring about equity or unsympathetic to women, but nothing could be further from the truth. Rather, it is because I have failed almost every first attempt at a military task—from applying to West Point to graduating Ranger School—that I know first contact with failure is not a cause for concern. Similarly, an initially high collective failure rate among women on the ACFT is not indicative of their future potential to succeed, especially when this failure is largely due to an inability to perform just one repetition of one exercise. In fact, my latest first-attempt failure was on a practice ACFT. Although I trained diligently to raise my 180-pound maximum deadlift to 265 pounds over several months, I realized I should have spent similar effort on the standing power throw event. Having never thrown a ten-pound medicine ball backward over my head, I missed the minimum distance for the infantry by 1.5 meters. However, after six weeks of dedicated effort, I was able to meet the standard and I am motivated to further improve. I know other women feel this same motivation, as their posts on social media proudly display their ability to meet ACFT benchmarks they previously thought unattainable. One women’s ACFT Facebook page has amassed over forty-five thousand members who inspire, advise, and encourage each other to improve their physical skills. Instead of stymieing this groundswell of motivation and perseverance among women by reverting to gender-based testing, policymakers should foster their potential with high expectations.

Overall, there is little doubt that the gender-neutral ACFT is a more appropriate measure of combat-related fitness than the APFT. While the equity question must be addressed, the answer is not to implement gender-based scoring or reduce the minimum standards for combat arms. Doing so would have both immediate and insidious impacts on combat effectiveness, as well as on women’s credibility and potential. As the ACFT is validated over the next year, there will likely be studies, phases, revisions, and alternate exercises. However, once the Army determines the right standard to which soldiers should train, the final version of the ACFT should hold men and women in combat arms to it equally and should maintain branch-based minimum standards. Failing to do so will further marginalize women in these units rather than protect them, and will hurt the Army rather than prepare it.

Capt. Kristen M. Griest was one of the first two women to graduate from Ranger School and she became the Army’s first female infantry officer in 2016. She is currently serving on active duty at the Army Talent Management Task Force in Washington, DC.