A Bad Romance: US Operational Concepts Need to Ditch their Love Affair with Cognitive Paralysis and Make Peace with Attrition 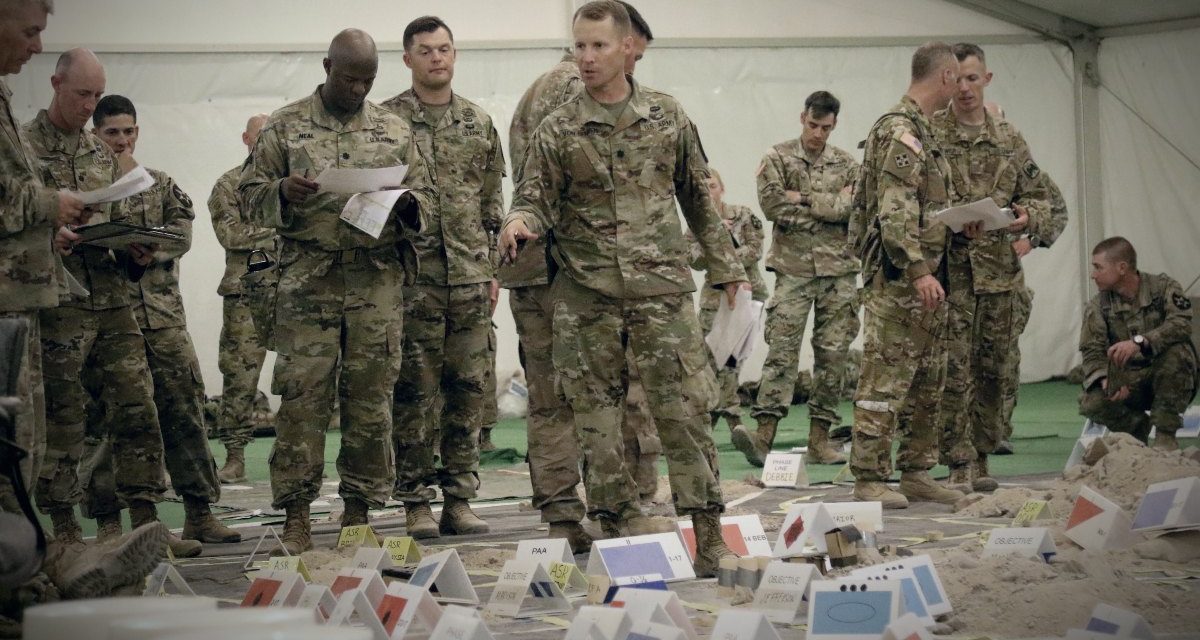 If buzzwords could kill the Pentagon would never lose a war. While lethality and dominance may be difficult to eliminate from the defense lexicon, the proliferation of so-called dilemmas needs rethinking. Creating dilemmas for opponents is an important principle in the US Army’s operational concept, Unified Land Operations, and an oft referenced component of multi-domain operations, which TRADOC claims will impose “multiple and compounding dilemmas on the adversary.” The adversary, presumably overwhelmed from simultaneous action in all domains, will become paralyzed, unable to orient or act given the simultaneity and complexity. The hope is for US forces to generate “overmatch,” and attain advantage through integration of operations, where it does not exist in material terms.

Unfortunately, this evolution of cognitive “shock and awe” is unlikely to prove effective against great power adversaries, and is a largely imaginary offset for not having actual material advantage in quantity or quality. The likely outcome from this artful combination of so-called dilemmas is best analogized to the famous market scene from Raiders of the Lost Ark, in which a swordsman skillfully flourishes his scimitar to present multiple complex dilemmas, before being unceremoniously shot by Indiana Jones.

Both History and Current Trends in Warfare Are Discouraging

A fair reading of the history of great power war, and observable trends in modern warfare, suggests that there will be high levels of attrition. When that fact comes crashing into US operational planning, first to go will be the idea that US forces are going to impose simultaneous operational or tactical dilemmas resulting in psychological paralysis of their opponent in what are for all intents and purposes set-piece fights, where most everything about US capability, logistics, power projection, and military strategy is known and telegraphed to the opponent. As Heather Venable recently argued in War on the Rocks, “most campaigns held up as paragons of ‘paralysis’ through maneuver often have depended on the attacker’s ability to inflict high levels of human and material attrition on the opposition as a means of attaining its goals.” The history of major wars is not encouraging for believers in these ideas, though hope springs eternal with each generation of military theorist.

The notion of imposing dilemmas through simultaneity is not the first time militaries have sought to come up with complex concepts to compensate for the inevitability of casualties, the need for mass, and the reality that a capable military opponent can absorb numerous blows (yes, from all domains). Rooted in a deep faith in technology-driven convergence, these ideas engage in needless complexity to attain advantage. They fail to account for the fact that as second mover in any conflict the operational realities of fights with either Russia or China do not accommodate many of the concepts envisioned.

Current trends point toward the need to plan for high attrition and invest in mass. Proliferation of cheap and disposable ISR (intelligence, surveillance, and reconnaissance) systems—on display in wars from Ukraine to Nagorno-Karabakh—means that the adversary force will see US formations in high fidelity, night or day. Automated systems for command and control dramatically reduce the scope of decisions that need to be made, and the time required to make them. Offensive cyber capabilities could reveal an attacking force, or disable critical components from the homeland to the battlefield. Electronic warfare has grown increasingly capable, able to disorganize command and control, detect emitting forces, and degrade cohesiveness as a force gets closer to contact. Remotely operated systems, or semi-autonomous ones, can rove the battlefield, finding, fixing, and finishing distributed forces. Even the rapid rates of attrition observed in contemporary conflicts, like the recent war between Armenia and Azerbaijan, do not reveal the losing side suffering paralyzing cognitive effects, but simply running out of materiel.

Despite the current mantra on the need to gear up for great power competition, these concepts speak to a US military that expects to be fighting a third-rate force. While there is a tremendous gap in combat experience between the Russian military, whose officer corps has been bloodied in several wars, and China’s inexperienced People’s Liberation Army, both are likely to be staffed by officers who do their jobs. Both forces have quantity in artillery, layered air defense, electronic warfare, and remotely operated systems, and as has often been said, quantity has a quality all its own—a quality that advanced Western platforms frequently do not have in terms of their high cost and their consequent limited availability along with burdensome requirements for replacement.

The United States can make the right investments to reduce cost, increase capacity, and adapt emerging technology to effectively win an attrition-driven fight against great power adversaries. Believing in convergence and dilemmas imposed through artfully integrated operations takes away from those approaches in favor of investing in a faith-based enterprise. Such ideas also encourage needless risk among forward-deployed or “inside” forces, rather than blunting the opponent’s initial attack by imposing high levels of attrition while preserving the force.

It’s Not Likely to Work Against Russia

Dynamic opponents are often featured as cardboard cutouts in current concept development. The Russian military’s strategy of active defense is fundamentally premised on forcing the United States into a war of attrition, setting up a meat grinder via a combination of defensive maneuver, noncontact warfare with recon-fire and recon-strike contours, and theater strike to destroy critical enablers or infrastructure. Rather than wait to receive the dilemmas promised in multi-domain operations, Russian forces will inflict attrition across domains and destroy key enablers or nodes at theater-wide depths. They too intend to conduct simultaneous defensive and offensive operations, so the adversary will have a substantial vote on pacing and escalation from the outset of the conflict.

The Russian military equally subscribes to concepts that shape the cognitive space, with emphasis on morale, and the psychological. These are premised on disorganization, deception, and technical means designed to favorably shape the opponent’s course of action, rather than expecting to paralyze the opponent via dilemmas. It’s unclear how these operations to attack command and control, disrupt kill chains, or shape decision making will reconcile in practice against US concepts to impose compounding dilemmas. To be clear, the Russian military is not particularly well set up for a prolonged war of attrition, but it is building out with that reality in mind, and the mental as an auxiliary to the material effort.

Another problem is that not all opponents are amenable to being stumped by simultaneity via the kind of operations the United States intends to conduct. Russia’s military decision-making process executes “no huddle” plays at the tactical level, with the commander deciding the scheme of maneuver, and most of the time spent on working out logistics or fires. Over the past decade a remarkable flattening has taken place in Russian military command relationships, along with integration of air defense, tactical aviation, and missile defense into the Aerospace Forces. These have been matched by proliferation of automated systems of command and control. The organizational, conceptual, and capability evolutions within the Russian armed forces were made first and foremost with the prospect of a US-led aerospace blitzkrieg, offensive electronic warfare, and missile strike in mind. This type of paralyzing operation, enabled by standoff precision guided weapons from different domains, has been the leading planning assumption in the Russian military for over twenty years.

Current US operational concepts to some extent imply that adversaries are working with dated command-and-control processes, systems, and organizational structures. They assume that an opponent’s ability to manage and execute has not advanced alongside offensive capabilities or benefitted from automation and artificial intelligence. This may prove true, but it is an untested assumption. In this respect multi-domain operations may describe the future of what the United States can do but reflect the past in how adversaries are likely to be affected. To some extent there is an emerging cult of simultaneity, continuity, and complexity in modern warfare, unappreciative of the fact that this is a mutually imposed problem, rather than something that offers the United States distinct advantages. This should further lead planners to suspect that the outcome will be high attrition on both sides.

It Generates More Questions than Answers

Some of the basic operational questions behind these concepts remain unanswered: How will contested logistics cope with a distributed force? If basing is vulnerable, how will the force generate simultaneous dilemmas in the first place, even as it is busily resolving its own? In a circumscribed battlespace, such as the Baltics, how will the United States impose dilemmas when vectors of approach are known, mapped, and defended? Even if a high degree of convergence can be initially achieved on the battlefield, it is unlikely to last and insufficient for US forces to win.

The United States is doubly challenged given it is operating in an expeditionary capacity against opponents who will have the initiative and know the contextual terrain. Multi-domain operations depend on brittle assets that are unlikely to be available from day one of a conflict, such as persistent space-based observation or wide-area, high-altitude ISR systems. In other cases, such as the cyber domain, there is no evidence that adversary vulnerabilities exceed those of the United States. This is not a screed against maneuver warfare with the latest technology, but a strong note of caution on presuming that advantage can be generated from effects that are unlikely to materialize in great power conflict.

The defense establishment needs to ventilate these ideas. Expecting paralysis or functional defeat can become an intellectual alibi rather than a serious way to think about wars with Russia or China, which are likely to be bloody, costly, and potentially protracted. It can also be an excuse to hold on to legacy systems or dive headfirst into techno-romanticism, believing that new sensors, networks, and integration will solve real and enduring problems in war. This will not compensate for bad strategy or poor choices in force structure. These conflicts can be deterred, and the fights won, without need for fanciful concepts that depend on cognitive paralysis, omniscience, or transcendent organizational synergy. The wrong ideas will guide US efforts away from trying to get on the right side of a cost imposition curve in attrition warfare, which is likely to define the next great power war, whether defense planners like it or not.

Michael Kofman is a senior research scientist at the Center for Naval Analysis and an adjunct senior fellow at Center for New American Security. Previously he served at the National Defense University and as a nonresident fellow at Modern War Institute at West Point.