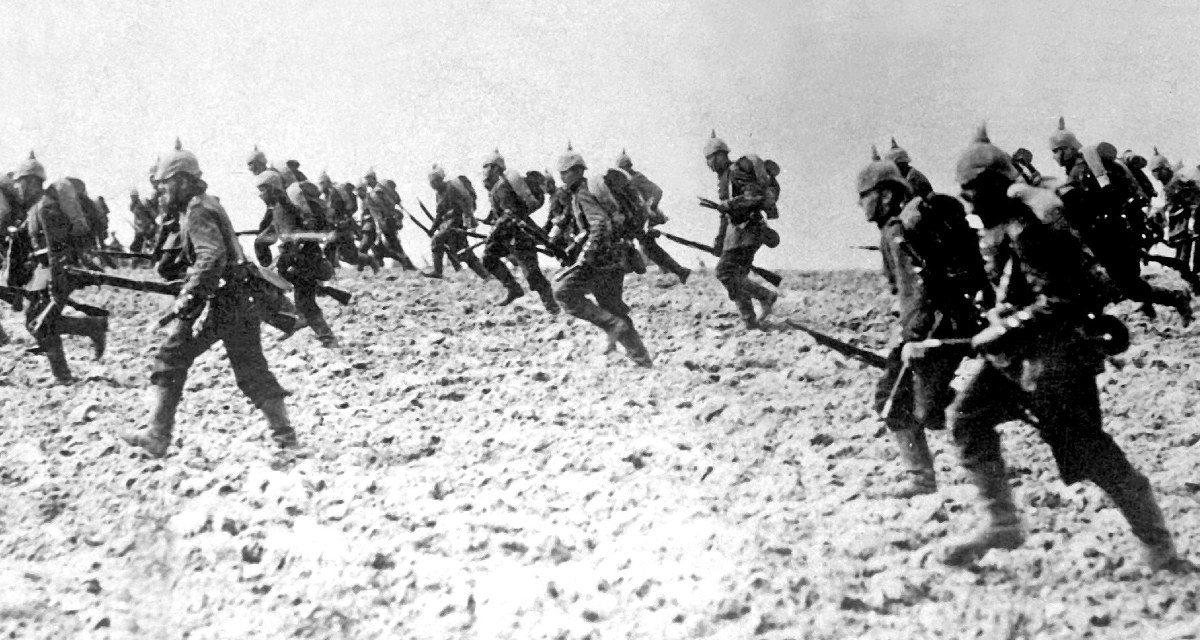 Military professional reading lists encompass a wide variety of subjects and offer varying applicability based on the reader’s occupation, position, and echelon of leadership. The subject of leadership is broad and timeless, whereas roles within the military are distinct and time-sensitive. What is best for a field grade officer will differ from what is best for a junior officer. For the latter, recommended reading lists invariably include a handful of mainstay titles—Once and Eagle, for example, or A Message to Garcia—along with a selection that reflect the strategic environment of the moment and the likely missions on the horizon. One that rarely appears, but is extraordinarily relevant especially for junior officers in the combat arms, is Erwin Rommel’s Infantry Attacks—a must-read prior to assuming platoon leadership.

The book, a reflection of Rommel’s experiences in World War I, is a firsthand account of a leader operating in an era that, despite the intervening century of change, shares much in common with our own—an era in which a combined arms approach was emphasized as the ideal and where tactics and technology spurred each other’s growth at a dizzying rate. In detailing his experiences from platoon leader to company commander, Rommel’s Infantry Attacks offers a timeless perspective on the lasting characteristics of war and provides invaluable insights specific to today’s battlefields.

Infantry Attacks instills meaning behind three characteristics of war that every leader would be wise to familiarize themselves with. Considerations of terrain, weather, and logistics appear in every account of battle and provide the reader with timeless insights on how they shape decision-making and outcomes.

Rommel attributes his tactical successes to careful map analysis and reconnaissance, which allowed him to “tak[e] skillful advantage of the smallest irregularities of the terrain.” The book is replete with examples, such as the capture of Mount Cosna, where Rommel and his noncommissioned officers identified terrain features such as draws, ditches, and small berms to recon and ultimately penetrate developed defenses at little to no cost. These details were novel for their time and reinforce the importance of mastering what are now basic competencies.

Infantry Attacks illustrates indirect utilizations of terrain as well. In one instance, Rommel realizes he does not need to rush an attack because the rocky terrain will significantly delay the enemy’s ability to dig in positions. He even directs artillery onto the cliffs above the enemy forces to rain increased stone and shrapnel ahead of the attack. Similar woodland effects are described when Rommel’s unit takes heavier casualties from splinters erupting from mortar rounds exploding in the treetops. These terrain-based effects, while rarely discussed, are very much applicable to mortars and artillery today.

Weather can be a blessing or a curse, and Infantry Attacks exhibits this duality. Readers may be unsurprised that morale will be lowered when rain weighs down rucksacks on a long march. However, they may be intrigued by how those effects can be used for gain. Rommel knew that if the weather kept his soldiers’ heads down and in their jackets, it affected the enemy the same. He would pray for terrible weather, understanding that rain would muffle the sound of their approach, the clouds would reduce the moonlight, and the fog would obscure them to within meters. Rommel admits his failures to plan for the weather as well. When ambushed in the winter, his machine guns could not return fire due to their crews failing to have thawed them with alcohol. Some doctrinal resources cover weather considerations but non apply such specifically applicable examples as Infantry Attacks.

The effects of subpar and degraded logistics are on full display today in Russia’s stalled invasion of Ukraine. While the United States is well regarded for its logistical capabilities, its leaders on the ground are rarely afforded critical opportunities to train with their systems stressed or collapsed entirely. Rommel’s account of the depleted German offensive intimately portrays the personal and materiel struggles of logistical failures. At the end of nearly every battle, one of his first priorities was to see if the field kitchens had been brought forward to replenish his drained soldiers. They never were; thus, out of necessity, he, like any leader, began accounting for his soldiers’ energy levels in his decision-making processes. He also found himself having to devote increasing amounts of time and attention to his soldiers’ discipline in urban environments as “hunger makes soldiers enterprising.”

Ammunition likewise proved to be a constraint. The success of German assaults depended greatly on the physical and psychological suppression provided by artillery ahead of the infantry advance. Infantry Attacks recounts many instances of last-minute abandonments of plans due to the unavailability of planned resources. In other cases, when abandoning was not an option, plans were adjusted, typically to a less optimal options—such as resorting to sheer surprise and violence. The loss of psychological suppression was worsened by Rommel’s own men being aware that they would be assaulting without indirect fires. Readers will quickly begin to understand the importance of logistics and the finite nature of their commodities. Losing priority of fires ahead of an assault or machine gun ammunition before a counterattack are just a few contingencies found in the book that remain very much a possibility today.

Infantry Attacks’ keen descriptions of century-old battlefields yield specific, relevant insights into modern war. There are many sections where, if not for dated nomenclature, it would be difficult to discern the era in which it was written. Rommel’s details of command post survivability, descriptions of the challenges of mission command and combined arms warfare, and reflections of his noncommissioned officer corps are as relevant today as the day they were written.

Early in the book, Rommel recounts having to call off an attack due to his higher headquarters coming under intense indirect fire. He notes how his battalion and regimental command posts were “situated close together in a highway cut” and that “their location was betrayed to the enemy by the large number of messengers who converged from all directions.” Today, the physical messengers and telephone wires of 1914 have been replaced by equally inconspicuous concentrations of electronic signatures revealing force dispositions. The barrages resulted in more than 250 casualties and forced Rommel to call off the attack from the failures in command and control.

The necessity of continuously improving one’s battle position is constantly mentioned throughout the book. Besides the obvious benefits of physical protection, the emphasis is increasingly relevant today in another way: concealment. Sensors dominate today’s battlefields and require service members to be increasingly adept at camouflaging and concealing their positions. Modern battlefields share the same threats of indirect fire as those of World War I, but also the added risks of armed drones and rockets. Leaders today are not often afforded opportunities to practice physically and electronically concealing their battle positions. Where Rommel was equipped with telescopes and sketches to dial in fires, the modern mapping resources leaders have at their disposal include satellites and Google Earth.

Infantry Attacks provides lessons in executing mission command as well. The reader will derive insights from battles spanning a wide variety of physical environments—mountains, forests, trenches, and urban centers. In these environments, the coordination necessary to conduct even early combined arms warfare proved difficult. The offensive technology of the time was outpacing the means of communication. Complex plans typically hinged on precise timing based on synchronized watches, last bursts of artillery shells, or opening salvos of machine guns, such that mission success greatly depended on disciplined initiative.

Rommel’s book illustrates the importance of knowing the full details of everyone’s role in a plan, to enable safe deviation when necessary. In one case, Rommel’s position came under intense surprise attack, and his platoon was forced to prematurely assault in a new direction that was in an adjacent platoon’s sector of fire. He made the split-second decision on his own, understanding that the cue for his adjacent platoon to open fire had not yet been triggered. Other situations required outright disobedience to achieve victory or survival. One such instance saw Rommel’s platoon being ordered to withdraw immediately; however, his headquarters was unaware of the tactical situation. Regressing immediately would have forced his soldiers into open fields, exposing them to high concentrations of fire; Rommel instead ordered an immediate attack forward to disorient the enemy and gain access to a different path of retreat. The assault led to a successful displacement of his troops with minimal cost.

Lastly, throughout Infantry Attacks, Rommel frequently refers to the high quality of his noncommissioned officers. While readers may associate World War I as a war of attrition fought in trenches, Rommel describes episodes of skillful maneuver warfare with enlisted leaders at the front. Noncommissioned officers were charged with the most complex tasks, such as deep reconnaissance, route clearing, obstacle breaching, and ultimately leading the attack. They were critical in maintaining cohesion and forward momentum in the face of intense fire. Their expertise and reliability, which Rommel takes the time to describe throughout the book, allowed his Sturmtruppen to execute the bold maneuver tactics that resulted in his enemies’ physical and mental defeat. Infantry Attacks is a testament to the importance of leader development within the noncommissioned officer corps. Even the most skilled leader cannot be everywhere at once, nor do they allow plans to rely on their presence.

As compelling as Rommel’s tactical and organizational insights remain today, his methods are not without fault. His particularly impersonal leadership style and overreliance on his legal authority are incompatible with today’s people-centric US military, especially at the company and platoon levels. He often wrote about how he demanded “superhuman strength” from his soldiers but never elaborates on how he inspired or achieved such effects. In one case where a subordinate lieutenant hesitated to assault, Rommel gave him an ultimatum: “Obey my orders or be shot on the spot.” The book also lacks insight into garrison operations. The author compliments his soldiers’ actions as a product of superior training during their brief respites. He importantly notes that “war makes extremely heavy demands on [your] soldiers’ strength and nerves . . . . For this reason make heavy demands on your men in peace.” But he stops short of offering any details on how he designed such training. Readers will learn much regarding tactics but will need to figure out themselves, alongside their noncommissioned officers, how to train to act on what they’ve learned.

Infantry Attacks is a must-read for junior officers preparing for leadership positions in the combat arms. Many reading lists recommend books to broaden perspectives, and such breadth will be necessary later on in military leaders’ careers. But young officers will benefit immediately and significantly from delving specifically into their craft. The descriptions within are telling that certain characteristics of war remain unchanged and that the challenges leaders faced a century ago are very much a reality for leaders in the twenty-first century. A junior officer who will face countless challenges in situational training exercises, training center rotations, or actual combat will be well served by choosing to encounter them first in Rommel’s Infantry Attacks.

First Lieutenant Kevin Shinnick is an infantry platoon leader currently assigned to 1st Squadron, 2nd Cavalry Regiment with prior enlisted service in the 75th Ranger Regiment. He is a graduate of the United States Military Academy and a native of Milford, Massachusetts.