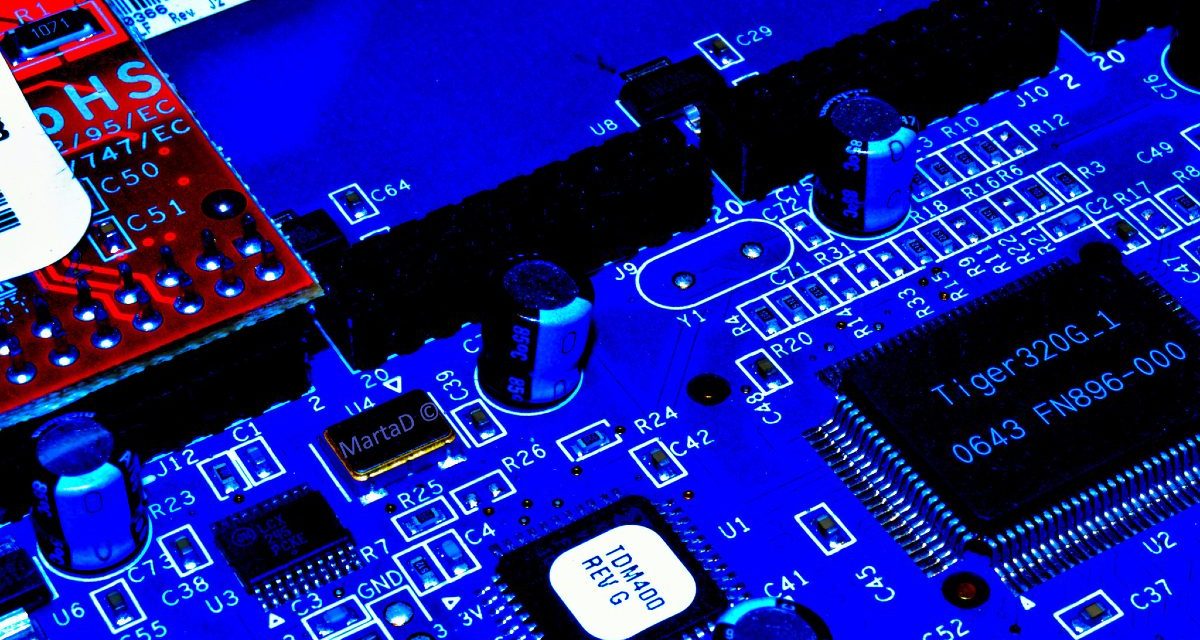 Editor’s note: Last fall, Stanford University hosted a brand-new class—Technology, Innovation, and Modern War. This year, the course is once again being taught by Steve Blank, Joe Felter, and Raj Shah, but they have broadened the scope to examine how technology and innovation impact the whole-of-government approach necessary to successfully compete with great power rivals. Once again, Steve Blank is writing about each class session and offering MWI readers the opportunity to follow along with the new course. Read about previous sessions here.

In class one of our new national security class at Stanford—Technology, Innovation and Great Power Competition—we learned that national power is the combination of a country’s diplomacy (soft power and alliances), information, military, and economic strength, along with finance, intelligence, and law enforcement. This whole-of-government approach is known by the acronym DIME-FIL. And after two decades focused on counterterrorism the United States is engaged in great power competition with both China and Russia.

In class two, we learned how China is using all elements of national power: diplomacy (soft power, alliances, coercion), information (using its economic leverage over Hollywood, controlling the Covid narrative), military might, and economic strength (Belt and Road Initiative) to exploit Western finance and technology. This has resulted in Western democracies prioritizing economic cooperation and trade with China above all else. China’s goal is to challenge and overturn the US-led liberal international order and replace it with a neo-totalitarian model.

Going forward, coexistence with China will involve competition but also cooperation. But it’s going to take the demonstrated resolve of the United States and its allies to continue to uphold a rules-based order under which nations share a vision of a free and open Indo-Pacific where the sovereignty of all countries is respected.

Catch up with the class by reading summaries of classes one and two.

To today’s topic is the United States’ other great power competitor—Russia.

Fall of the USSR

Our guest speaker for our third class was Mike McFaul, the former US ambassador to the Russian Federation and former National Security Council senior director for Russian and Eurasian affairs. Mike wrote about his experience as ambassador in From Cold War to Hot Peace: An American Ambassador in Putin’s Russia. At Stanford, Mike is the director of the Freeman Spogli Institute for International Studies, Stanford’s research institute for international affairs.

Ambassador McFaul pointed out that at times Russia pursues security and economic interests in parallel to ideological aims. At times, these objectives complement each other. At other times, they clash. He posited it’s because Russian policy is run by Putin and his political institutions.

The class reviewed highlights from the assigned readings, noting in particular that John Mearsheimer’s article took the contrarian position that the United States and its European allies share most of the responsibility for the crisis in Crimea.

As Dmitri Trenin from the Carnegie Moscow Center points out, the 2014 Ukrainian crisis was the Rubicon. Russia broke a quarter century of cooperative relations among great powers by pivoting away from the West and starting a new era of intense competition. Mike McFaul has a more nuanced view. “For a complete understanding of Russian foreign policy today, individuals, ideas, and institutions—President Vladimir Putin, Putinism, and autocracy—must be added to the analysis. An examination of three cases of recent Russian intervention (in Ukraine in 2014, Syria in 2015, and the United States election in 2016) illuminates the causal influence of these domestic determinants in the making of Russian foreign policy.”

In terms of China-Russian relations, there are now at their highest point since the mid-1950s, with the two countries drawn to each other by the most elementary law of international politics: that of the balance of power. Russia has long struggled to overcome the constraints imposed by the country’s chronic inability to retain talent in support of homegrown innovation and research and development.

We also covered the two regional threats to international security—North Korea and Iran—as well as the continued threats of terrorism from nonstate actors like al-Qaeda and ISIS.

The Islamic Republic of Iran has actively pursued nuclear weapons and long-range ballistic missiles. Under the Iran nuclear deal, the JCPOA, Tehran had agreed to limit uranium to 3.67 percent enrichment. Iran broke out of the deal in 2019. Today, Iranian uranium enrichment has reached 60 percent enrichment (90 percent is weapons grade). Iran has been a major source of regional destabilization, hostage taking, and sponsorship of terrorism: Houthis rebels in Yemen, Hezbollah in Lebanon, Hamas and Palestinian Islamic Jihad in Palestine, and numerous Shia militias in Iraq (e.g., Kataib Hezbollah, Asaib Ahl al-Haq, the Badr Organization). Iran’s long-running conflict with Israel is a perennial potential flashpoint for a broader conflict in the region. Iran has also been actively using cyberattacks and has attacked and harassed commercial shipping and freedom-of-navigation operations in the Persian Gulf and the Strait of Hormuz.

Nonstate actors haven’t gone away. They are a persistent, survivable threat unconstrained by traditional geopolitical checks. They are capable of regional and international terrorist attacks. Some are actively pursuing acquisition of weapons of mass destruction. Addressing the problem through counterinsurgency and counterterrorism operations runs the risk of long-term engagements that damage other national objectives and, sometimes, the national interest. Yet, if left unaddressed, these insurgencies can spread globally and create second- and third-order challenges (al-Shabab, Boko Haram, Abu Sayyaf).

For the students’ group project, the class was formed into seven teams. We suggested they get out of the building to first deeply understand the problem they’ve selected. We offered a series of questions they may want to ask: Who has this problem? Why does the problem exist? What are the consequences of the problem? When does the problem need a solution? How does this solution get deployed or delivered? How is the problem being solved today? How do you know you solved the problem?

Next week we’ll start talking about the impact of commercial technology on great power competition. First up: semiconductors.

Our previous class focused on Russia, which is asserting itself as a great power challenger. From the readings and lecture, we learned how Russia pursues security and economic interests in parallel with its ideological aims. Having also previously covered China as a US competitor, as well as the elements of national power (DIME-FIL), the class now shifts to the impact commercial technologies have on DIME-FIL. Today’s topic: semiconductors.

Silicon Valley, the Military, and the Journey to the Fourth Industrial Revolution

Class Four Guest Speaker
Our guest speaker for our fourth class was John Hurley, former member of the President’s Intelligence Advisory Board, an expert on semiconductors and supply chains, and a former US Army captain.

Semiconductors play a critical role in great power competition. Both our commercial and military systems are dependent on semiconductors. China spends more on semiconductor imports than it does on oil. We framed the advances in technology as part of the fourth industrial revolution. We then reminded the students of the role DoD and the intelligence community played at Stanford, turning it into an outward-facing university, which kickstarted technology entrepreneurship here in Silicon Valley.

Next we discussed dual-use technology. For the first time in seventy-five years, federal labs and our prime contractors are no longer leading innovation in many critical technologies, including AI, machine learning, autonomy, biotech, commercial access to space, and others. Rapid advances in these areas are now happening via commercial firms—many in China. This is a radical change in where advanced technology comes from. In the United States, the government is painfully learning how to reorient its requirements and acquisition process to buy these commercial, off-the-shelf technologies. (Products that are sold commercially and to DoD are called “dual-use.”)

We then began a deep dive into semiconductors by drawing the map of the semiconductor industry. Five companies provide the majority of the wafer fabrication equipment needed to make chips. TSMC is the leading fabricator for manufacturing logic chips. Of the twenty-nine new fabricators starting construction in 2021–22, over half are in China and Taiwan.

We took the class through the TSMC case study and mapped out the roles and interests of TSMC, China, Intel, and the United States. We discussed China’s drive for semiconductor independence, US export controls on Huawei (why they’re in place and their consequences), the various constituencies of a US semiconductor policy (Commerce Department, DoD, US chip makers, US semi equipment suppliers, etc.), and whether TSMC’s success makes Taiwan more or less secure given China’s goals of reunification with Taiwan.

Next we discussed the question of how decision makers formulate policy. Does it start by asking what problem must be solved? Using semiconductors as an example, is it China’s access to US technology? Or is it China embedding this advanced US-designed technology into its military systems? What happens to TSMC and Western access to advanced technology if China quarantines or invades Taiwan?

How do policymakers select and narrow a problem? Is it based on the value the policy adds for identified stakeholders? Is it a personal passion or interest? Specifically for China and semiconductors, what are potential solution ideas? Export controls? Stronger CFIUS regulations? How do you take into account stakeholder feedback (DoD, Commerce Department, commercial firms)? And once you create a policy, how do you effectively implement it?

As a midterm assignment, we told students to assume that they’re policymakers and write a two-thousand-word policy memo that describes how a US competitor is using a specific technology (semiconductors, AI, autonomy, cyber, etc.) to counter US interests. The memo should also propose how the United States should respond.

We also had several teams talk about their learnings from their out-of-the-building interviews. Team ShortCircuit is working on how the United States should improve its ability to design and produce semiconductors, and develop and retain relevant talent. They heard from a professor that the ratio of Stanford students taking software versus hardware courses was ten to one in favor of software, a complete reversal from decades ago. We discussed (1) weather that is broadly true or just anecdotal, (2) if true, whether it was the same in other research universities, (3) why it happened (for instance, because software startups are getting funded at obscene valuations), (4) what kind of incentives and policies would be needed to change that, and (5) where in the value chain those might be most effective (students, venture capitalists, government, etc.)

Next week’s class will focus on artificial intelligence and machine learning.