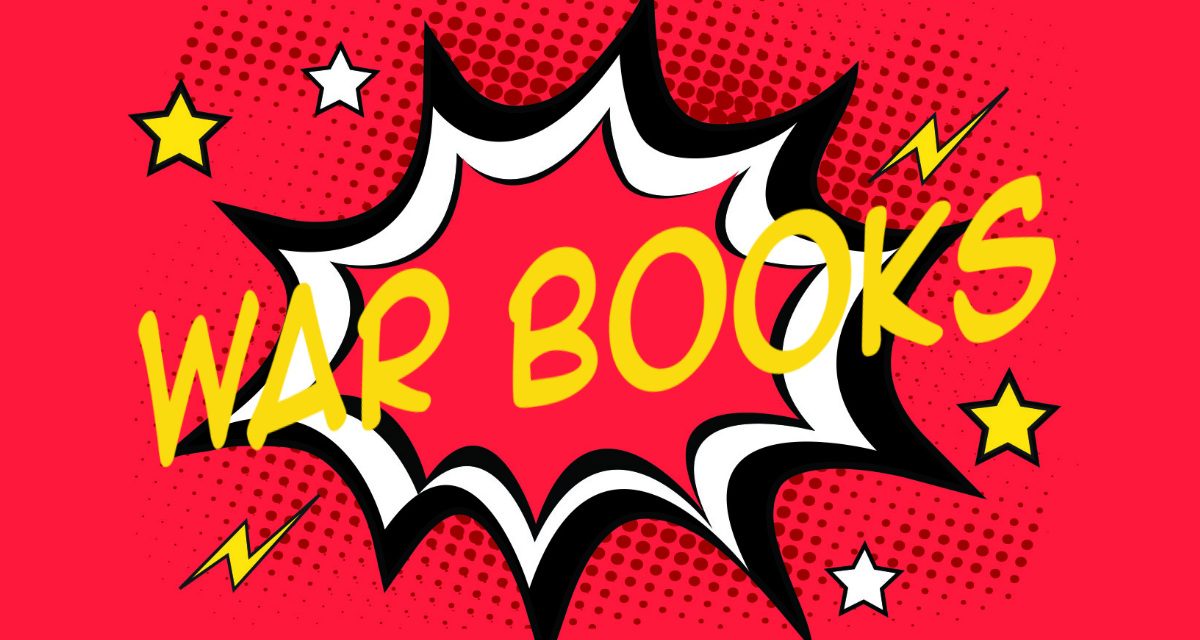 Last year I made the case that comics were one of the most important but least respected means of education. This year, nothing has changed. While academics continue to sneer, this visual medium continues to enlighten through entertainment. This year I present seventeen more titles that help readers explore human conflict.

Written by one of Korea’s most prominent comic artist, this Manhwa (the Korean version of Manga) proposes an alternative history of conflict between South Korea and Japan. As the two ancient enemies throw down over the resources of Indonesia, Japanese citizens of Korean dissent are rounded up and interned like 1930s German Jews. While the story may be fictional, the deep-seated resentment of its author is not. Unlike NATO members who have worked for generations to heal the wounds of World War II, this is not the case in Asia. There’s a lot of light shining through the cracks in our wall against China and North Korea, and that light is shining right on Nambul War Stories.

And here’s why the Koreans—and the Chinese, and a lot of other people in Asia—still can’t forgive Japan. Young’s work follows the story of a Chinese Kuomintang officer trying to escape the historic “Rape of Nanking.” It was one of the worst atrocities committed by the Kwantung Army, and, to this day, Japan has yet to formally apologize, or even acknowledge it. As Japan’s best friend and staunchest ally, we Americans need to understand how the sins of Asia’s past may very well spark another war in the future.

Want to know how that pudgy little nut job in Pyongyang ended up holding a nuclear knife at our throat? This is his biography—from his early days being groomed for power, to his eventual struggle with his now dead brother, to his consolidation of power over the “Hermit Kingdom.” To understand Kim Jong-Un is to understand the unique history and the culture of North Korea. And this book helps readers do both.

Will Eisner, The Plot: The Secret Story of The Protocols of the Elders of Zion

Russia’s deft use of grey-zone information warfare didn’t just magically happen overnight. Ivan has been turning out unmatched untruths for generations. In The Plot, Eisner chronicles the birth of humanity’s single-most enduring piece of propaganda. The Protocols of Elders of Zion was created by reactionary elements within the Tsar’s court to try blame liberal modernization as a Jewish conspiracy. What was intended as shortsighted palace intrigue eventually became a global movement, influencing everyone from Hitler to Idi Amin, to the dung beetles who marched at Charlottesville chanting “Jews will not replace us!” This is a classic case study in how war words are forged, and why, as the saying goes, “A lie can travel halfway around the world before the truth can get its pants on.”

Jean-Pierre Filiu and David B, Best of Enemies

Marc Halter (illustrated by Brian B. Chin), History of the Maginot Line

The American Civil War saw Napoleonic tactics used against rifled muskets. World War I saw cavalry charges into barbed wire and machine guns. And World War II saw World War I fortifications being bypassed by mobile Blitzkrieg. The Maginot Line didn’t just represent static warfare, it personified static thinking! Too often, those charged with national defense can’t, or won’t, embrace new tactics, new technology, and new uncomfortable ideas. The result is the Maginot Line. Halter’s story digs deep into the engineering details of this massive construction project: the resources, time, and insane amount of money building this monument to the past. This work should be read as cautionary tale for anyone thinking they can win the next war by refighting the last one.

The character of the Unknown Soldier has been around for a while but this reimagining puts him in the world’s bloodiest backwater. Our hero, scarred both inside and out, declares a one-man war against child soldier Gen. Joseph Kony. Along this four-issue journey, we witness the poverty, violence, and neglect from the rest of the world of northern Uganda. And all of it’s true. Dysart did his homework, which included traveling to Uganda for firsthand, on-the-ground research. By weaving these facts into a fictional comic series, he achieves the brass ring of educated readers without them even knowing it. Recommended for anyone interested in Africa and required for anyone just being deployed to the AFRICOM AOR.

Cultural diversity isn’t just a feel-good term for the touch-feely left. Including all Americans, no matter their background, is vital for our national security. Like the Tuskegee Airmen or the 442nd Nisei, the Choctaw code talkers didn’t only make a contribution to their nation’s defense, they made a genuine difference. In World War I, several Choctaw soldiers came up with the genius idea of using their native language (which was banned, by the way), as an unbreakable military code. Not only was this code a stunning success, and not only did it pave the way for the Navajo Code Talkers of World War II, it came at a time when Native Americans were not even technically citizens!

A short, simple play by play of an obscure, mostly forgotten, but highly critical conflict between the UK and Argentina. For anyone who wonders what a big, mechanized, “conventional” war might look like between established nation-states, look no farther than the Falklands War. This is what a modern war in the Pacific would look like. Nuclear subs, anti-ship missiles, land-based bombers and carrier-based fighters. They were all there.

The true story of a comic book artist and his family trapped in Sarajevo during the 1,425-day siege. Everything is based on the intermittent faxes transmitted during the fighting. They describe the shelling, the snipers, the starvation and isolation. They also describe the stunning, unforgivable cowardice of the so-called “developed world.” While a modern-day genocide unfolded in Europe’s back yard, the UN, the European Union, and NATO all stewed in craven incompetence.

Ethan Hawke and Greg Ruth, Indeh: A Story of the Apache Wars

An American insurgency, pure and simple. The Apaches were some of the greatest guerrilla fighters in world history and this comic illustrates their struggle. Obviously times have changed, but the nature of lightly armed, highly mobile conflict hasn’t. In light of our recent experiences in Iraq and Afghanistan, and given the future experiences that are most assuredly waiting in ambush beyond the horizon, we need to study this insurgency very carefully.

Another American insurgency which must be faced, absorbed, and learned from. This was America’s most brutal slave uprising and it perfectly illustrates what can happen when violence becomes the currency of a nation. Baker pulls no punches. No one comes out of this story clean. This is the nightmare scenario that needs to be on any soldier’s mind when they are deployed to a nation with deep cultural wounds. If those wounds haven’t healed, if hate and bloodshed are the way one group has used to suppress another, rest assured, another Nat Turner is waiting in the wings.

Jason Quinn (illustrated by Saachin Nagar), Gandhi: My Life Is My Message

Sometimes a violent revolution can be averted, and sometimes the solution is just one person. Every time our forces are deployed to a country teetering on the edge of armed insurrection, they should always be on the lookout for that person. Think of this book as a recognition guide. By studying Gandhi’s life; his personality traits, and his path, it might just be possible to spot the next Gandhi somewhere out there among the chaos. We need to find those people, to listen to them, to give their ideas a chance to succeed. Because if we don’t, if we let the moderates fade and the radicals win, then the way is paved for another Nat Turner.

Title 10: that’s the designation any US Army unit will be given when deployed to a domestic disaster. And as we’ve just seen with recent hurricanes, those disasters aren’t going away. This comic follows multiple stories of several New Orleans residents caught up in the maelstrom of Hurricane Katrina. Hopefully it will give Title 10 soldiers just the briefest glimpse of what life will be like for next US citizens they will be called on to save.

What does a comic about the 2008 financial crisis have to do with war? The answer: everything! This is how wars start. Take away people’s lives—their jobs, their homes, the means to feed their families—and sooner or later some of them are either going to pick up guns or else vote for someone who tells them to pick up guns. That’s what happened in the 1930s and that’s what’s happening now. Just like the Great Depression lit the fuse of World War II, the Great Recession is setting off a chain of events that will rip through this decade and beyond.

The Department of Defenses, The M16A1. Rifle, Operation and Preventative Maintenance

By the Department of Defense. Yeah, you heard me, the DoD. There was a time, before I was born, when the US government actually saw the value in comic books. This manual, illustrated by Will Eisner (the single-most important comic book artist EVER) teaches G.I.s how to make lemonade out of the lemon that was their new rifle: how to clean, how to load, and how not to get their face blown off—and all in the kind of visual language young people are already familiar and comfortable with. What a novel idea.

Like any friendly neighborhood superhero, few know the secret identify of this masked avenger. For years his online comics have detailed the trials and tribulations of a US Army doctrine writer battling the forces of evil . . . and incompetence, and arrogance, and bureaucratic sloth. Now, finally, the collective works of Doctrine Man are out in print and available on Amazon. Anyone in uniform will recognize the inside jokes immediately (like the omnipresent threat of reflective belts), and those of us in Civilian World will get a quick, funny, detailed education into the minutiae of military life (which includes reflective belts). We don’t know who you are, Doctrine Man, but we all sleep better knowing that you’re out there.

Max Brooks is an author, public speaker, non-resident fellow with the Modern War Institute at West Point, and senior resident fellow at the Atlantic Council’s Art of Future Warfare project. He is the author of World War Z and The Harlem Hellfighters.