Waterworld: How Ukraine Flooded Three Rivers to Help Save Kyiv 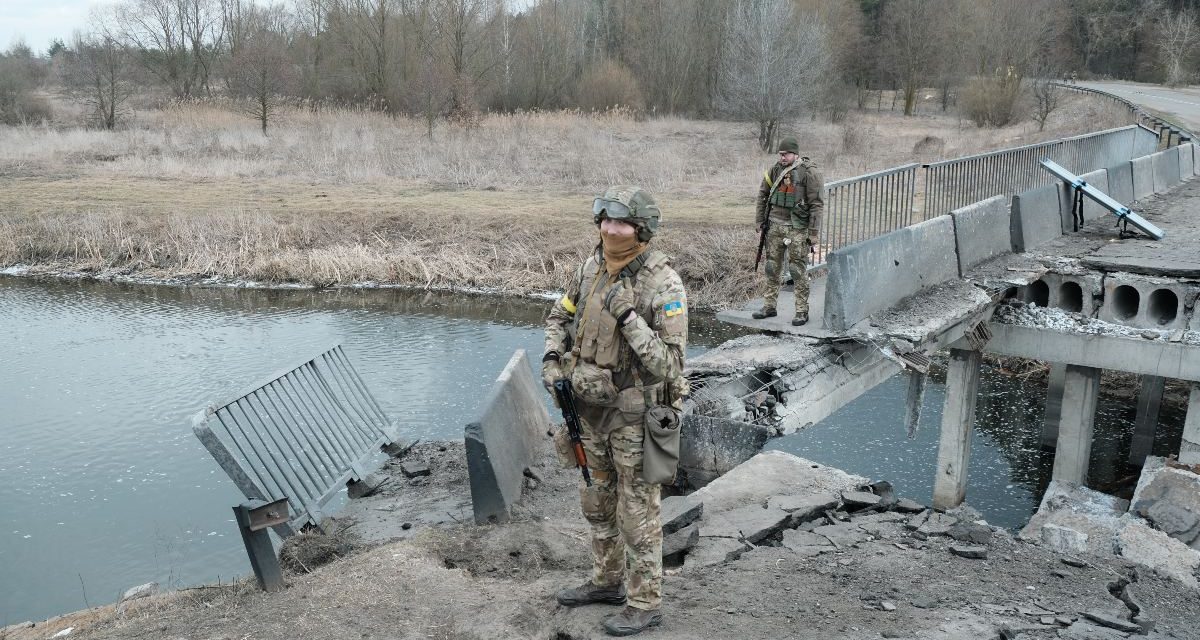 Off the eastern coast of central Greece sit high cliffs that once served as a narrow access point from the sea to its cities. Popular legend has it that in 480 BCE a small band of Spartan warriors, led by King Leonidas, defended the mountain pass against a much larger Persian army. The defense of the pass at Thermopylae has been memorialized in books and movies like Gates of Fire and 300.

In the opening phase of the war in Ukraine, the defenders took a page out of the Spartan playbook. To prevent the advancing Russian army from taking Kyiv, the Ukrainians turned the capital into a series of narrow passes that could be defended with a small mix of regular and irregular forces. But in a modern twist on the Thermopylae legend, they then flooded these passes by opening dams to nearby rivers, rendering them unnavigable and effectively sealing the city off from the enemy. Like Sparta, Ukraine is a land power—which makes such tactics even more innovative.

Kyiv is a modern city with ancient roots, dating back to 482 CE, if not earlier. Spanning 324 square miles, the city sits on a series of hills, with waterways and river bluffs among the dominant terrain features. These features have long made it an ideal defensive site along a key trade route: the Dnipro River. As its population grew—more than doubling in size between 1962 and 2022—so did its suburban sprawl. Kyiv became, in effect, a complex network of connecting towns and villages—areas connected by multiple riverways off the Dnipro that supported local agriculture. After Russia’s invasion, these areas were the buffer that saved Kyiv and won Ukraine its first major battle of the war.

The Battle to get into Kyiv

The Russians initiated the battle of Kyiv by the landing a small force of airborne troops to capture Antonov Airport, about eighteen miles from the city center. But lacking the necessary combat power to support the dismounted infantry, they were destroyed by Ukrainian artillery and counterattacks soon thereafter. The failed airfield seizure was meant to support the mounted invasion being launched from Belarus to Kyiv’s north.

The Ukrainians defending Kyiv did not know Russia’s exact plan of attack. But they clearly understood that one of their only hopes to save the city was to conduct what military planners call a “defense in depth” to capitalize on the city’s complex urban and natural terrain. That is exactly what the Ukrainian military and civilian fighters did. They turned all approaches to the city into a deadly trail of obstacles and attacks.

Obstacles are a staple of any type of military defense. Defenders use obstacles to block, turn, fix, delay, or disrupt enemy forces, and when enemy forces attempt to breach or bypass obstacles, they become easy targets for direct and indirect fires. Obstacles can also buy defenders time to get critical military formations and capabilities into position.

Obstacles range from mined razor wire to concrete walls. But some of the best ones combine man-made obstacles with existing ones—for example, cratering a road that has large buildings on both sides or blowing a bridge over a river. Waterways are very effective obstacles because most military vehicles rely on bridges to cross water, so bridges become choke points.

Defending Kyiv, Ukrainians deployed thousands of obstacles. Importantly, they blew many of the most important bridges leading to the city. They blocked streets with thousands of concrete blocks, cars, and steel “hedgehogs” more reminiscent of World War II beaches than modern warfare. But most skillfully and ingeniously, they created obstacles by flooding major rivers.

While Ukrainian special operations forces blew up bridges all around Kyiv, Ukrainian civil engineers released water from key dams. In some places, they flooded entire areas, including the village of Demydiv. In other places they raised the water level high enough to saturate the low-lying ground to make it impossible for vehicles to traverse yet not so high that there was standing water. In a coordinated operation, they released water from dams on the Irpin, Zdvyzh, and Teteriv Rivers. This required engineers to operate the dam gates and people to monitor the flow rate of the rivers at multiple sites to ensure it was enough, but not too much, to create the desired effect.

The flooding of the rivers achieved multiple purposes. In some places, like Demydiv, it took major roads and directions of travel completely away from mechanized forces trying to advance. In other places, it raised the river levels to prevent Russian vehicles from easily bypassing blown bridges. It also turned the already soft ground around major arteries and critical access points into the city into muddy marshes and fields—which is like quicksand for mechanized vehicles.

Ultimately, the flooding forced the Russians onto the roads and into choke points—not unlike the gates of Thermopylae—of Ukrainian choosing. This allowed Ukrainian fighters to carry out ambushes on the few bridges or routes left open, such as the bridge linking Bucha to Irpin, two small cities on the outskirts of Kyiv. There, on February 27, fighters destroyed the lead and trail vehicles of a major Russian convoy and then used artillery to destroy up to one hundred vehicles stuck between them.

Later, when Russians tried to establish pontoon bridges over the now flooded rivers to avoid ambushes and choke points, as they did in the town of Moshchun, the flooding allowed a small number of Ukrainian army and civilian fighters to use the nearby dense woods as cover to destroy and stop the Russian advance.

This is not the first time the effects of flooding have been observed in modern war. In the Second Battle of Fallujah in 2004, US bombing of enemy positions destroyed some of the city’s key water and sewage infrastructure. While attempting to advance through some parts of the city, American soldiers found themselves wading in waist-deep sewage while fighting a high-intensity battle. The flooded city slowed the US advance to such a degree that ending the flooding soon became the commander’s top priority.

Luckily, the US Marine unit’s attached civil affairs team had gathered a long list of city technocrats prior to the battle. Included among the many municipal workers were those from the water department. When tasked to stop the flooding, the civil affairs team conducted a patrol to find the one individual who could identify the locations of damaged sewer lift stations and the parts required to fix them. With the help of the municipal worker, the Navy Seabees made the necessary repairs, but flooding remained in some areas, continuing to slow US forces’ advance.

Out of ideas, the civil affairs team was driving over a bridge to get to the water station on the other side when they noticed that the dammed river was extremely high. When they stopped to talk to the dam operator, he told them that he did not have any gas to run the generator that was required to open the dam. The civil affairs team got him the fuel that he needed and within twelve hours the city was bone dry.

Tactical ingenuity such as flooding opens new possibilities in defending a major city. But to execute this kind of tactic successfully requires expertise in urban infrastructure, tacit knowledge of local terrain, and a cumbersome enemy that does not adapt. The ability of the Ukrainians to create so many layers of complex obstacles to prevent Russians from entering the city would be nearly impossible for an outside military to do without local knowledge and expertise. Nobody can import this kind of innovation in a box.

The lesson from Ukrainian tactics also sends a warning to Western militaries. It calls into question just how ready even the United States would be in defending a major city in war, not least because of their tendency to focus on technological bells and whistles. But the lesson from Kyiv is an important one—that by using natural terrain, in this case a dam, undermatched forces can defend a sprawling city on the cheap. Likewise, while US forces were able to overcome the flooding in Fallujah, it is not clear they would have had the same success if they had encountered flooding on the scale that the Ukrainians created. In the battle for Kyiv, local knowledge, planning, and urban expertise won this decisive fight.

Like Thermopylae, the Battle of Kyiv may well inspire books or movies about how a small force using superior knowledge of urban terrain defeated a numerically and militarily superior power. By utilizing natural terrain and water to their advantage, Kyiv’s defenders gave us a story on resistance, the will to fight, military ingenuity, and urban warfare. King Leonidas could not have done a better job.

John Spencer is chair of urban warfare studies at the Modern War Institute, codirector of MWI’s Urban Warfare Project, and host of the Urban Warfare Project Podcast. He served twenty-five years as an infantry soldier, which included two combat tours in Iraq. Separate from his role with MWI, together he and Liam Collins traveled independently to Ukraine in June 2022 to research the defense of Kyiv. He is the author of the book Connected Soldiers: Life, Leadership, and Social Connection in Modern War and coauthor of the forthcoming book, Understanding Urban Warfare.

Liam Collins, PhD, was the founding director of the Modern War Institute at West Point and served as a defense advisor to Ukraine from 2016 to 2018. He is a retired Special Forces colonel with deployments to Iraq, Afghanistan, Bosnia, the Horn of Africa, and South America. He is coauthor of the forthcoming book, Understanding Urban Warfare.