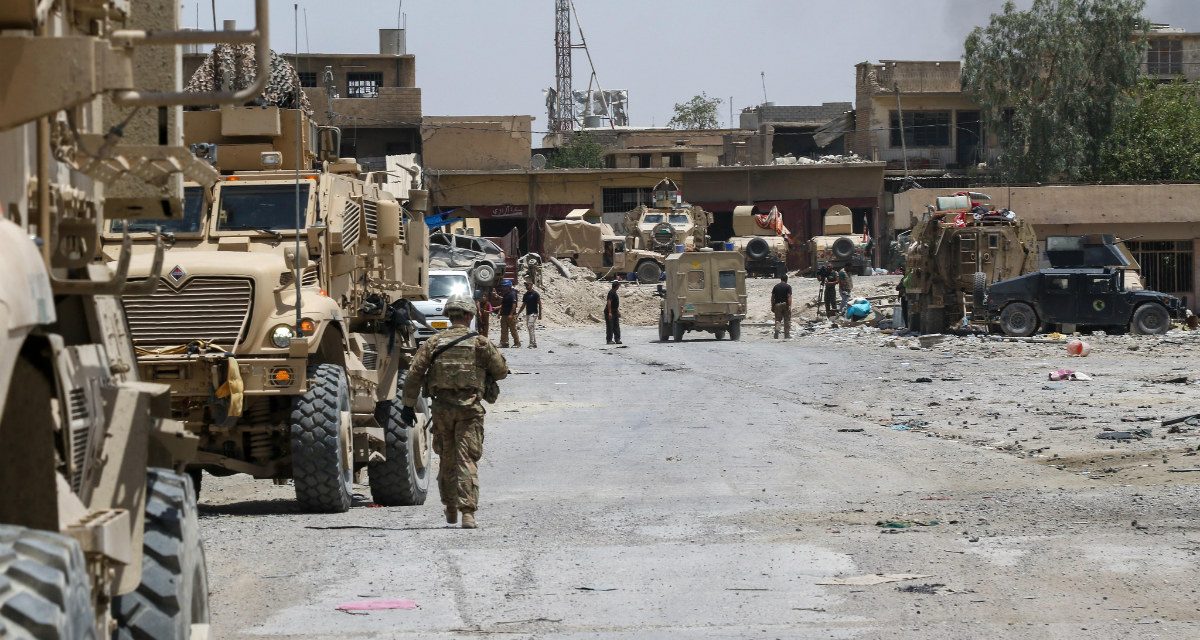 Mosul has been wrested from the three-year-old grasp of ISIS. In Raqqa, the cityscape is one of ruin and devastation as efforts to dislodge the group continue apace there, as well. However, a fundamental question remains. Each city has thus far survived the ISIS-related ills that have plagued it, but will they survive and recover from the massively destructive efforts to expel the group?

The honest answer is that we simply don’t know, largely because we don’t fully understand the cities themselves—their strengths, their vulnerabilities, the characteristics they share with other urban settings and those that are unique to them. But equally troubling is that we—the US military—don’t have the means or a method of dealing with urban security challenges that would have been any less destructive than those of the Iraqi forces in Mosul or the anti-ISIS forces fighting street by street in Raqqa. We, too, would have had little recourse other than essentially destroying the cities in order to save them.

Both of these problems stem from a common cause—the lack of a framework that helps us both to conceptualize cities and to map the effects on those cities of military operations in them. Among those that have been put forward, one in particular has gained some traction but deserves much more: understanding cities as dynamic living organisms.

Authors like Abel Wolman, Joel Tarr, David Kilcullen, and a recent cohort of the Chief of Staff of the Army’s Strategic Studies Group have argued that cities can be understood by looking at their “metabolic flows.” Like living organisms, these authors have shown how cities rely on material (food, air, water, electrical power, fuel), economic, and information inflows while also creating waste outflows, both vital to keeping the city alive. Building on this analogy can help not only to further understand cities, but also to know better how to treat them when they suffer any of a range of ills.

The analogy is useful first and most obviously as a sort of anatomical (or geographic) one. As the body has its core and appendages, a city has a core and peripheries; cells flows through a complex system of vessels just as people, resources, and information flow through a similarly complex infrastructure network; both the human body and the city are complex and adaptive, and both have dependence patterns between their constituent parts that can range from completely obvious to almost entirely hidden to anything but the most expert observer.

But unpacked further, the analogy offers an opportunity for the US military to develop an understanding specifically of cities as operating environments that it has heretofore lacked, as evidenced by a string of military undertakings that have been met with varying degrees of—and yet, in retrospect, arguably inevitable—failure to accomplish strategic (and sometimes even operation or tactical) objectives.

The chief problem is that because we don’t understand cities nearly as well as we could and have demonstrated that we know even less about how to optimize military actions in them, we are like medieval doctors, lobotomizing patients and letting their blood without improving their health and too often causing death or such life-long damage that the patient survives as only a dysfunctional shadow of itself. We cause incredible disruption and even destruction, but without any research-based evidence that these efforts will save the city.

But just as the medical field has progressed by learning its way toward better health solutions and organizing professionally in a way that optimizes patient outcomes, the US military can do the same with respect to its ability to operate effectively in cities when called upon to do so.

As a practical example, consider the treatment a cancer patient receives. The cancer may have been detected first during an appointment with a general practitioner scheduled after the patient began developing symptoms of illness. When tests discover a cancerous mass, the doctor refers the patient to a specialist—in this case an oncologist. This isn’t because the general practitioner serves no purpose; on the contrary, by handing off to another professional, trained to expert standard in a narrow subset of medicine, he can return to the much larger number of cases where his general medical education serves the greatest value. The oncologist manages a very specific challenge while the general practitioner cures a wide range of ailments, makes further referrals as needed, and saves lives in the emergency room.

Similarly, one of the US military’s greatest strengths is the high degree of professionalism and competence across a range of tasks of its conventional forces. But what happens when a challenge is encountered on the urban battlefield? Unfortunately, nothing. A tool is selected from the existing, limited suite of options and wielded by a generalist with no urban-specific expertise—no doubt a competent military professional, but a generalist nonetheless. There’s a better way.

Need to excise a cancer like ISIS without disrupting the governance and service provision that the group has been conducting for three years? Turn to a military professional who has been trained and equipped to know how to do so. Faced with a critical objective of isolating an enemy leader without disrupting the flows human and resource traffic that keep’s a city’s fragile economic pulse beating? Call in another specialist. But because the Defense Department does not doctrinally conceive of cities as something fundamentally unique, we don’t have those specialists.

Returning to the example of the cancer patient, once a cancer has been identified, a treatment plan is designed. This can include a surgical oncologist to remove cancerous masses, a medical oncologist to use chemotherapy, or a radiation oncologist to use radiation therapy. If surgery is a part of the treatment, the surgeon’s team undertakes an elaborate process to prep the patient. Each step is deliberate and aimed solely at maximizing the prospects of the surgery’s success. They scrub their hands and arms before donning gloves and masks to protect the patient, who will be in a temporary state of incredible vulnerability to infection. In the operating room, they undertake a choreographed routine to minimize the chances of an unintended mistake—each step based on generations of incrementally improved medical understanding of cause and effect.

Perhaps most importantly, the team hooks the patient up to a network of monitoring devices to constantly measure and evaluate vital signs, prepared to react to any change that signals a potential threat to the patient. Here again, the analogy highlights how ill-prepared the US military is to effectively enter an urban operating room and achieve defined objectives. Not only do we not have the tools to monitor a city’s vitals, but we don’t even have a consensus view of what those vitals are, or how their importance is weighted differently from one city to the next. What are the resource inflows and outflows on which a city is most dependent? How do we monitor the economic and sociopolitical heartbeat of a city, on which its stability rests? How do we know if a cure for one problem afflicting a city isn’t exacerbating another?

These aren’t easy questions to answer, but neither, of course, were the many medical questions that, over a long period of advancement, have so dramatically improved health outcomes for patients. And this brings us to a final learning point from the cities-as-bodies analogy. Each of the doctors that take part in a patient’s treatment was trained within a formal educational system. The military likewise has a robust educational organization underpinning its training—although the level of specialization when it comes to training for urban environments remains woefully under-developed. But medical schools don’t just teach future doctors. They form the centerpiece of the medical research framework that constantly refines the profession’s understanding of medical challenges and develops new and more effective techniques to address them.

The US military has no such center of learning—and more critically, research—about cities, either as a unique form of terrain or as operating environments. The US Army, for instance, has the Muscatatuck Urban Training Center at Camp Atterbury, Indiana, the Shughart-Gordon urban training complex at Ft. Polk, Louisiana, and mock cities of Razish and Ujen at Fort Irwin, California, along with a smattering of less ambitious efforts to replicate urban environments for training purposes. But even setting aside the problems of unrealistic venues and uneven training across the force, the focus solely on training is akin to, say, surgical students showing up infrequently to practice their craft on pigs or some other stand-in for human patients, without a long and rigorous period of classroom instruction. Worse, without a research program that informs the training, those surgical students might be stuck practicing the same, timeworn and ineffective processes year in and year out. That’s clearly not good enough for a profession whose members hold lives in their hands, and it should not be good enough for a professional military force in an increasingly urban world.

From Hue to Fallujah, the US military has ample evidence that we need to improve the way we operate in cities. But before we can do that, we need to figure out a better way to think about cities. With their complexity, their dynamism, their individual quirks, and their vulnerabilities, the analogy to the human body is too obvious to ignore. If effectively contending with the array of difficult security challenges cities pose is the goal, following the path to get there will not be an easy task. Thankfully, the medical profession has left us a trail of breadcrumbs to get us on our way.