The Worst-Laid Plans: The Next Phase of Russia’s War in Ukraine 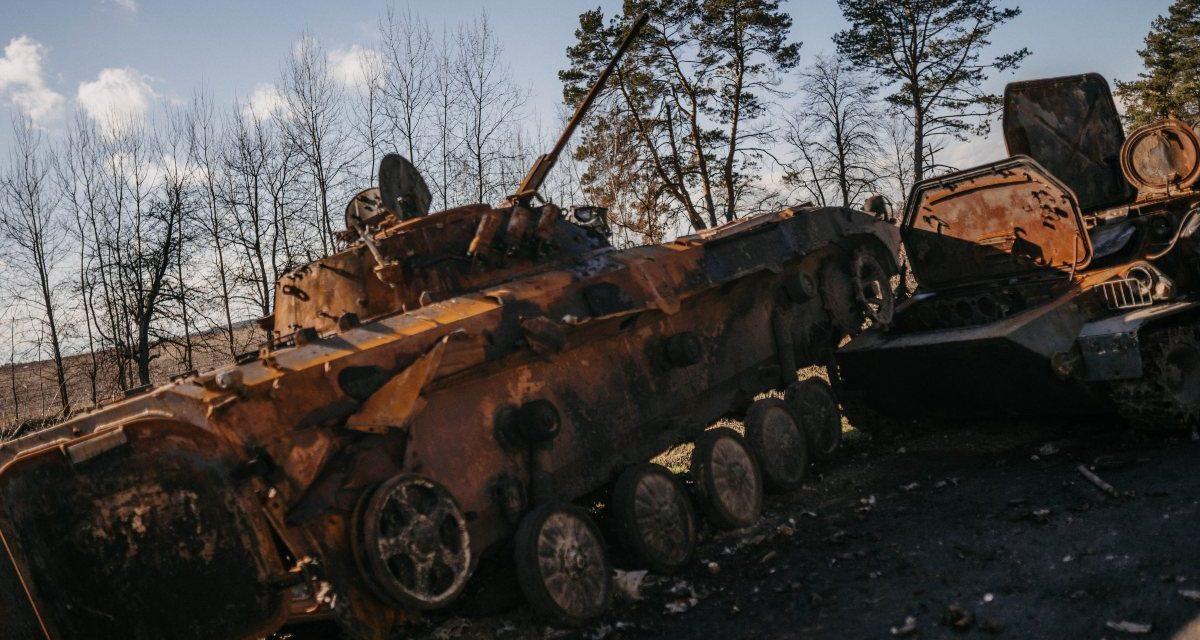 On February 24, 2022, Russian President Vladimir Putin announced the start of a “special military operation” on the sovereign territory of Ukraine. While claiming that Russian military actions would serve to protect the people of Ukraine against “genocide” through “denazification” the operation amounted to a full-scale invasion of the country. While some military and intelligence analysts, particularly those with access to the Kremlin, anticipated that Kyiv would fall within days, Russian forces not only failed to take the capital but have since retreated in the face of Ukrainian counterattacks.

Today, many of the Russian forces have consolidated further to the east and southeast, focusing more on the Donbas while continuing to launch concentrated attacks on cities like Mariupol. Russian missile strikes continue across the country, and the Russian government has threatened attacks against Western military supplies that continue to flow into the country. After Russia’s failure to achieve a knockout blow against Ukraine in late February and early March, the war now appears to be evolving into a protracted conflict, with civilians increasingly targeted or caught in the crossfire.

No military plans ever match the reality of the battlefield. But given the inaccuracy of many predictions about the course of the war, it is worth reconsidering both Russian and Ukrainian prewar assumptions, and the major factors that explain the failure of Russia’s initial strategy. Russian planning failed to account for the intensity and flexibility of Ukraine’s initial defense, the resilience of critical systems (including command-and-control and air defense systems), and the resistance of the Ukrainian people in general.

According to media reports, Putin’s decision to invade Ukraine was only made in February, and the buildup of military forces along the border (including in Belarus) might have remained merely an exercise or a prelude to a more limited occupation of the Donbas but for the personal decision of Putin. In the absence of any provocation, the scale of the operation came as a surprise to many in both the Ukrainian and the Russian militaries.

In Ukraine, after eight years of conflict with Russia and amid the emotional stress and burnout associated with the intense informational warfare conducted on the population, few believed that a large-scale attack would happen, even in the expert security community. While other governments warned about the imminent possibility of a large-scale invasion, only a few steps were taken to prevent the attack.

The Russian military, meanwhile, was also insufficiently prepared for a full-scale invasion. The number of tactical battle groups mobilized by the Russian Federation was insufficient to conquer a country as vast as Ukraine. This was especially true when taking into account the geography of Ukraine, the numerical and qualitative composition of its security forces (far different from what Russia had encountered in 2014), the Ukrainian armed forces’ training, its eight years of combat experience, and the increased deployment of a large number of antitank and antiaircraft weapons. Senior Russian policymakers nonetheless appear to have believed that achieving strategic, large-scale results would be possible with relatively small forces, perhaps hoping that the high mobility of the Russian army and its use of high technology would compensate for its lack of manpower. The Russian government most likely assumed that it would quickly overwhelm the Ukrainian forces.

After inflicting a massive missile strike on key defense infrastructure targets in Ukraine, Russian troops, as well as troops of the so-called Luhansk and Donetsk People’s Republics (LPR and DPR), went on the offensive, striking from the north to Pripyat and Chernihiv (including from the territory of Belarus); from the east to Konotop, Sumy, Kharkiv, and Akhtyrka, as well as from the line of contact with the LPR and DPR to Stanitsa Luganskaya, Volnovakha, and Mariupol; and from the south to Kherson, Novaya Kakhovka, and Melitopol.

In the first forty-eight hours, Russian troops took control of Zmeiny Island, Henichesk, Novaya Kakhovka and the Kakhovka Hydroelectric Power Plant, and the Chernobyl Nuclear Power Plan. They also attempted a helicopter assault at the Antonov Corporation airfield two kilometers from the Kyiv suburb of Hostomel, with additional ground forces moving to Konotop, Sumy, Akhtyrka, Kharkiv, and Kherson. By the end of the first days, Russian troops had advanced from the territory of Belarus and connected with the landing force in heavily contested Hostomel and blockaded Kyiv from the west, reached the approaches to Chernihiv, and taken Melitopol. Both the ground and airborne assaults met heavier than expected opposition and were not able to consolidate territory inside the capital.

Meanwhile, Russia launched air and missile strikes against Ukraine on a massive scale, intending to hit critical nodes in Ukrainian defense systems. But the initial missile strikes failed to overwhelm Ukrainian forces. The Ukrainian Air Force, warned in advance about the strikes, lifted most of its aircraft into the air and thereby avoided destruction while still on the ground. Command-and-control systems for air defense were not disabled, resulting in the Russian failure to achieve air supremacy. Russia’s stocks of missiles, meanwhile, were significantly depleted. This subsequently made it difficult for it to carry out massive strikes with modern high-precision, long-range weapons.

In certain operational areas, Russian troops penetrated tens and even hundreds of kilometers into Ukraine. But after encountering the formation of defense nodes in their rear, they were forced to retreat. This cutting of supply and logistics lines has become one of the defining features of the Ukrainian defense. Well-organized centers of resistance lay behind enemy lines, allowing pinprick strikes by units of Ukrainian special operations forces, which helped slow the pace of advance of Russian troops into Ukraine. Ukrainian special operations forces, meanwhile, effectively began to destroy the Russian command staff, partly by geolocating unsecured communications. Small mobile tactical groups based on the basic system of nodal strongholds and urban defense have also helped keep Russian forces from encircling and capturing significant forces.

Since then, combat actions in many locations have evolved into protracted positional fights. Russian forces did not maneuver in such a way to expose their advancing units, but at the same time they did not significantly increase forces to take offensive actions in unexpected directions. The Russian military has also failed to encircle any significant Ukrainian troop concentrations and create its widely advertised so-called “cauldrons.” Instead, the Russian military has shifted tactics to long-range artillery and bombardment, with no further significant offensive actions once the Russian government announced the end of the first phase of its operation. The Russian military, beyond withdrawing from the Kyiv area, has become bogged down in localized battles against dug-in Ukrainian soldiers, particularly in the urban areas of eastern Ukraine.

Irregular forces, in particular territorial and volunteer units, have played an important role in this phase of the war, and they are likely to become more salient in the spring and summer. The actions of Ukrainian special operations forces and special services, including in occupied territories of Ukraine, have been particularly important, as they have helped to organize regular actions and national resistance behind enemy lines. In the first weeks of the invasion, this took the form of cutting supply lines behind advancing formations. In the future, this may take the form of sabotage of fuel and ammunition depots, cutting Russian communications, and organizing protests within occupied Ukrainian cities. These actions help to leverage Ukrainian asymmetric advantages in operational intelligence and information operations, as well as to strengthen local morale.

In many respects, the officer corps of the Ukrainian Armed Forces, and to an even greater extent of the Russian military, adhere to classical twentieth-century concepts and doctrine, constraining their ability to systematically apply nonkinetic and remote technologies of warfare. Without a decisive and flexible technological advantage, the Russian military must rely upon numerical superiority, but it will struggle to sustain this without a full mobilization. For Ukrainian forces, urban warfare tactics favored the defender, but dislodging Russian forces from occupied territories will require more than just conventional weapons. The more decisive weapons include control systems and reconnaissance and information systems, long-range air and missile defense systems, long-range standoff weapons, including reconnaissance and strike unmanned vehicles, and counterbattery weapons and radar. Most important, however, is the training of Ukrainian personnel in how to use these technologies and effectively plan and manage their application. It also requires the creation of new support and maintenance centers.

Russian plans assumed fractured leadership and lack of resolve among the public, both inside Ukraine and from international partners. Despite years of kinetic and informational attacks inside Ukraine, meant to destabilize society in line with hybrid warfare tactics, the Ukrainian public has remained remarkably unified. Russian-speaking cities like Kharkiv showed extraordinary resistance, contrary to the Kremlin’s expectations of support from ethnic Russians; cities like Mariupol refused to surrender even under intense attacks against civilians. All these factors contributed to the failure of Russia’s initial blitzkrieg strategy. They have forced Russian forces to redefine their aims and resort to brutal attacks against civilians. Putin has sparked a far longer conflict than he intended or expected.

Yuriy G. Danyk is a reserve major general in the Ukrainian Army. He has also served as rector of the S.P. Korolyov Zhytomyr Military Institute and as head of Educational and Scientific Center for High Technologies and Institute of Information Technologies of the National Defense University of Ukraine. He is a professor at the National Technical University of Ukraine “Igor Sikorsky Kyiv Polytechnic Institute.”

Tamara Maliarchuk is an associate professor and computer technologies chair at Kyiv International University. Dr. Maliarchuk was a member of the NATO working group on DEEP program implementation in the Armed Forces of Ukraine and an analyst with the S.P. Korolyov Zhytomyr Military Institute in Ukraine.

Chad Briggs is a lecturer in global security at the Krieger School for Advanced Studies, Johns Hopkins University. Dr. Briggs has worked on hybrid warfare in Ukraine since 2011, when he was Minerva professor and chair of energy and environmental security at Air University, and later worked with NATO and the European Union on cyber, irregular warfare, and wargame/scenario training in Kyiv and Odesa.